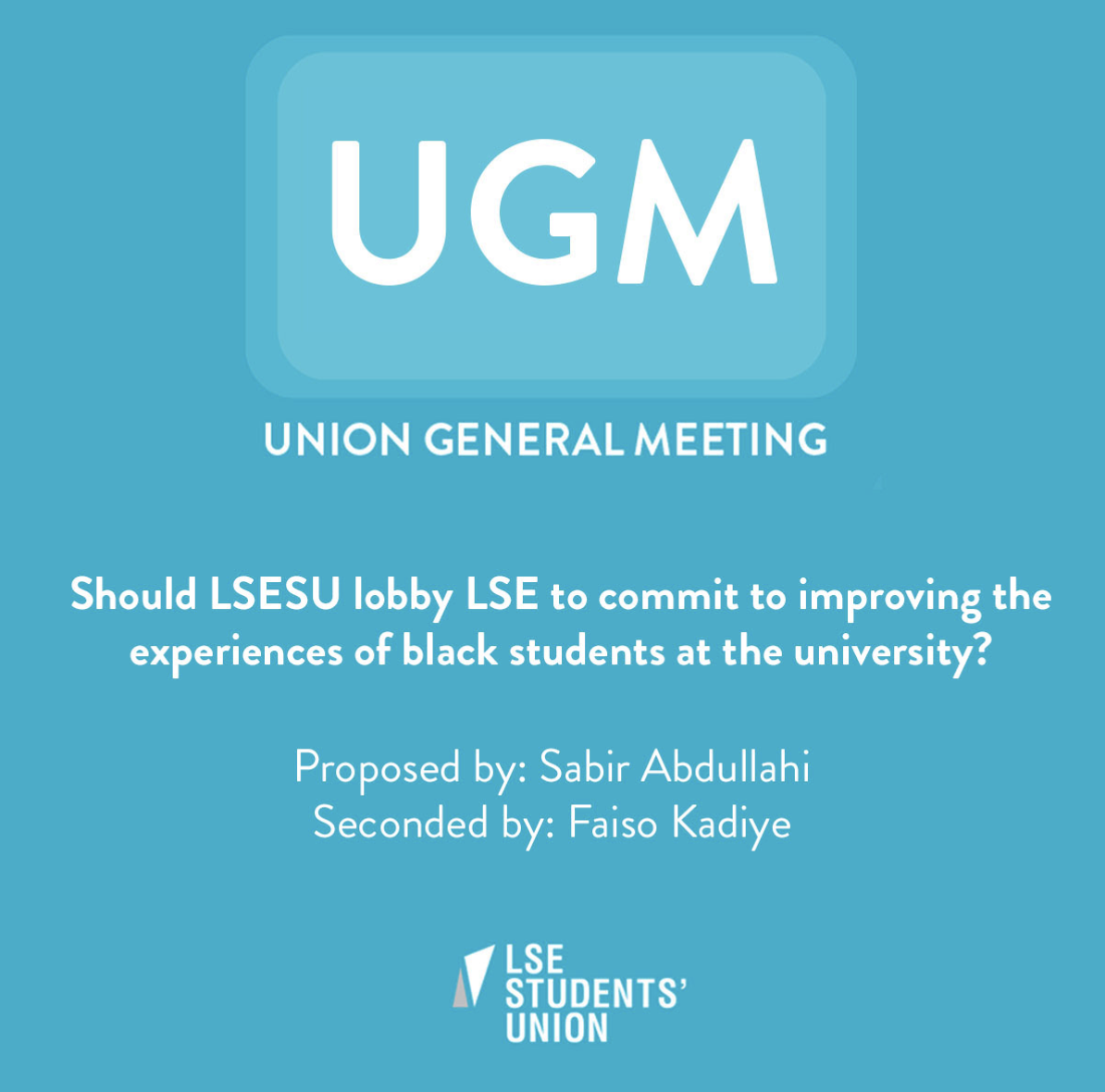 Committing to improving the experiences of black students: The story behind the failed LSESU motion

On November 12th, Faiso Kadiye and Sabir Abdullahi, two LSE undergraduate students,  proposed a motion to the LSE Student Union General Assembly: “Should LSESU lobby LSE to commit to improving the experiences of black students at the university?” The way in which  it was phrased – as if fighting racism and systematic prejudice is up for debate – provoked an overwhelmingly negative response by students, members of the Decolonising LSE collective, and others. In the end, the motion did not reach the 250-vote target necessary for it to pass. The Beaver interviewed the students that put forward this motion to understand why it was phrased in such a way and what concrete changes it proposed.

Sabi and Faiso are not merely undergraduate students – they are the LSESU BME and Anti-Racism officers, respectively, for the 2020/2021 academic year. Their presence in these roles is part of an unprecedented group of LSESU part-time officers this year. For the first time, the BME, Anti-Racism, LGBTQ+, and Women’s officers are all Black. Their roles, as well as multiple identities and experiences, present an exciting prospect for intersectional leadership. Faiso shared that “our work is also based on our personal experiences… In my time at LSE, I only had one Black teacher… and I kind of always felt like, how come I’m studying International Relations, and there are barely any non-white teachers?”

Faiso and Sabir are focused on a range of pressing topics from lobbying the university to set tangible targets for hiring Black academics, to ensuring that students at LSE know how to report racism and that LSE makes this process more transparent. In the beginning of the year, Faiso was at a university’s Race Equity Steering Group as the School prepared to launch The LSE Framework for Race Equity, which it claims will “aim to tackle systemic inequity and improve the experiences of BAME staff and students,” as stated in the LSE website. As BME officer, Sabir is liaising with the university and pushing for the changes that students want to see. However, he felt as if “it wasn’t enough for me as an officer to convince them [the university] – students really want this and that this is really important to them [students] Of course they understood it [the initiatives Sabir wants to implement], but there are always excuses for [not] introducing specific targets for Black students, for Black teachers….’ In this vein, he believed a motion that advocates for change on a range of relevant issues approved by the student community would be a strong statement. This would contribute to making LSE commit to its statement released over the Summer in the End of Term message from Minouche Shafik, LSE Director, after the Black Lives Matter movement gained renewed momentum: “(…) we must not let the sense of urgency fade so we will be thinking about what more we can do to raise awareness and accelerate progress on campus and globally around issues of race over the coming academic year,” Shafik wrote in the message.

The LSESU motion outlined specific targets which, if approved, would have become binding. It would have committed the SU to actively lobbying LSE to ensure that these targets were met over the next three years. Importantly, the commitment tied future LSESU officers to this action too, as Sabir explained: “Regardless of who the officers are, regardless of what their views are, or how committed they are to race equity, they have to work on this for three years.”

“Initially, we phrased it [the motion] as “Black Lives Matter: LSE should commit to improve the experiences of Black students,” Sabir clarified. However,  the SU required the officers  to phrase the motion as a question in order to be proposed in the UGM (Union General Meetings). Faiso and Sabir both recognised that asking students whether the SU should pressure LSE to improve the experiences of Black students does not make sense: “I do understand the Twitter uproar (…) From the outside, it does seem  like the SU is asking itself ‘should we do this?’ when they can do this,” Sabir shared. “What a lot of people did not understand was that we are already doing this, but we as students are trying to bind the institution –  the SU – not ourselves as officers, to do this. And I think that’s a really important distinction.”

However, as Faiso explained, putting forward a motion and phrasing it as a question was the only mechanism available to ensure that the work they had carried out would be sustained long after their tenure ended. Last year, a motion entitled “Should the LSE change and improve its sexual harassment and abuse support provision?” was submitted and approved. As both part-officers pointed out, asking whether LSE should improve its sexual harassment support provision is just as egregious. The students who submitted that motion certainly believed that LSE should do more in relation to sexual harassment. Regardless, the nature of LSESU’s system requires motions to be phrased as questions because they have to be approved democratically.

The motion Faiso and Sabir proposed highlighted important commitments that the SU should pressure LSE on. These included reviewing the causes of why Black academics staff are underrepresented. Sabir, the BME officer, has made this issue a priority in his role. He is examining why there are so few Black staff at LSE and is in contact with the person that chairs all the academic appointments. Refusing to believe that this is due to a lack of candidates, Sabir is investigating whether LSE is a hostile environment for minorities or if there are inherent biases in the university’s recruitment system. This will help him better understand what LSE must do going forward in order to diversify its academic staff.

In line with this, the motion called for LSE to create time-bound targets that address the underrepresentation of Black staff and ensure that these are uniformly implemented across all departments and levels of the organisation. Additionally, it referred to the need to distribute funds and resources at LSE based on completion of an impact assessment that demonstrates positive impact on Black students. This is because LSE tends to set bold targets for the university as a whole, but it is difficult to monitor and ensure that each of the departments are following through. It is an ambitious demand, but it would mean that access to some funds and support for departments would require evidence that departments are adopting measures to increase diversity and representation within their communities. Both part-time officers expressed their conviction that ensuring that the staff of the School is diverse is crucial to make sure that other goals are reached. Doing so would contribute to the decolonisation of the curriculum and to changes in persisting attainment gaps between white students and students who are part of ethnic and racial minority groups.

Another key demand in the motion was that the SU should advocate for the creation of a pool of funding designed specifically for 10 Black British PhD scholarships per year. Sabir has already made some headway in introducing scholarships specifically for Black PhD students – a practice that already exists in other institutions such as Oxford University. Although the scholarships are not available yet, Faiso shared his belief that LSE is committed and working towards making them a reality in the near future.

Ultimately, the motion was not approved. Voting was open for 24 hours and students could only find information about the motion if they came across a LSESU post on their social media. Perhaps the motion would have been successful if the officers had contacted and partnered with other groups at LSE advocating for the decolonisation of the curriculum and the diversification of the staff. However, the Deconolinising LSE collective immediately repudiated the motion on social media after its release, stating that it was “confused and appalled by the fact that the SU needs to “vote” to “decide whether or not the experiences of Black students at the university matter.” This message spread quickly and it soon took the focus away from the actual content of the motion.

When asked to reflect on the result, Faiso and Sabir recognised that there was a lack of communication between the SU and the wider student community –a recurring issue at LSE. The motion was not promoted before voting opened and, once voting did open, the SU failed to communicate effectively what the officers intended to achieve. Furthermore, the officers did not address the controversy around why the motion was phrased as a question until after voting was closed. At that point, even if people recognised that the motion was well-intended and advocated for important and precise goals, nothing could be done to change the outcome. Sabir, as Anti-Racism Officer, held an Anti-Racism Townhall on the November 25th open to the BAME/PoC community at LSE so that students could raise their concerns, but only four students attended. Going forward, Faiso wants to spend more time working on Mental Health and improving support for Black students in terms of counselling. Sabir is interested in hosting more events on the interplay between social mobility and race and the way this impacts students’ experiences. Both officers remain as committed to holding LSE accountable as before submitting the motion, but whether future officers will do the same cannot be known.