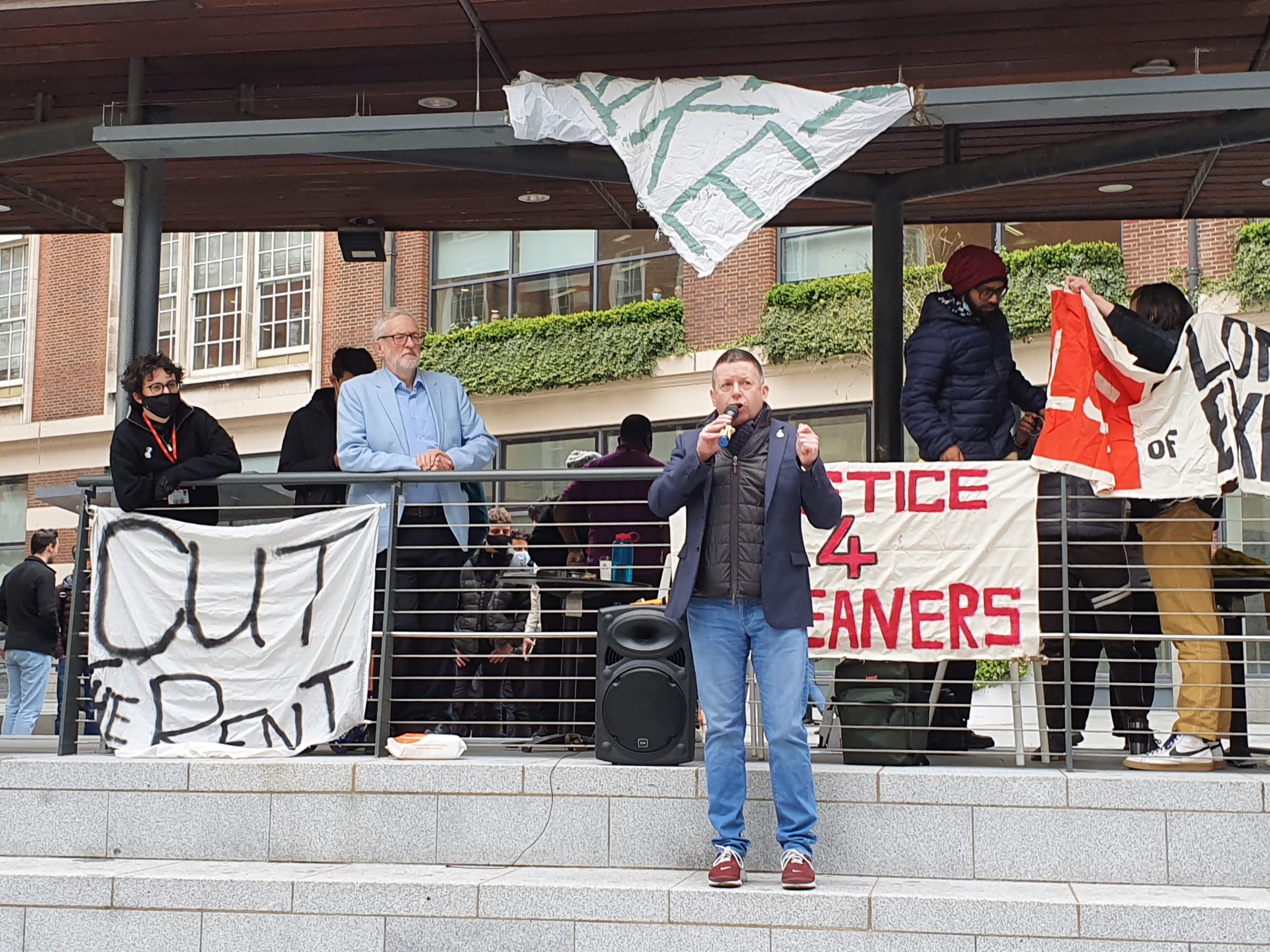 Pictured: Students begin to gather in the Plaza in front of Centre Building for the rally.

The event was opened up by speakers Faraz Khaild, Emerson Murphy and Tori Anderson, representing the LSE Fee Strike, UoL Rent Strike and LSE Rent Strike movements respectively. The LSESU’s outgoing Education Officer Bali Birch-Lee, along with student speakers from the SOAS Fee Strike and private hall strike movements, helped round out the event. Speeches called for students to get involved and rallied for other causes: accessible, free education and solidarity for LSE’s workers.

Not by coincidence, the event was held on Workers’ Memorial Day. The LSE’s Justice 4 Cleaners movement was represented by speakers Daniel, Beverley and Samuel. Daniel commented to The Beaver:

“I really do want to thank all the students for supporting the LSE Cleaners. God bless you and keep supporting, and join a union, no matter which”.

To this day, LSE’s cleaners are pushing to have demands of a suitable changing room, uniform concessions and pay adjustments met by LSE’s management.

The rally’s main draw was Jeremy Corbyn MP, whose bold speech on the solidarity of students and workers was followed by football chants and whistles. He discussed the significance of Workers’ Memorial Day, the climate crisis, and ongoing issues concerning Covid-19. He ended by declaring “No building cleans itself. No food cooks itself. No roof repairs itself… it’s a team of people of all skills, of all backgrounds, of all abilities, that make the world a better and safer place for all of us”.

“It’s great to be sharing the stage with so many people—staff, students, politicians, cleaners—, it truly is a joint battle. Students have really been persecuted since the start of the pandemic and ultimately what we need is free education for every student at the point of use”, noted Hannah Graham of the Green Party, who was also in attendance.

Howard Beckett, the Assistant General Secretary of Unite the Union, spoke next and reflected to The Beaver on the crowd’s high spirits:

“It’s superb to see student solidarity in standing against injustice and we need more of it. Students need to get confidence. We saw what young people could do in 2017 and now it’s time for them to build a movement, demand justice and an end to the monetization of education”

With the onset of characteristically poor London weather, the almost two-hour long speaker roster drew to an end and the crowd of students trickled off.  Reflecting on the rally and the way forward, community organiser Tori Anderson noted to the Beaver:

“The emotions after this event are high. The cause had a name among the student body and we have made progress in terms of our reputation but also in mobilizing both the student body and management. We’re hoping to collect the power we’ve garnered today, channel it into our movements and have demands met for the rent strike, the fee strike, and the cleaners.”

You can follow LSE’s Fee Strike here, see the livestream from the event here and find out more about the Justice for Cleaners initiative here.