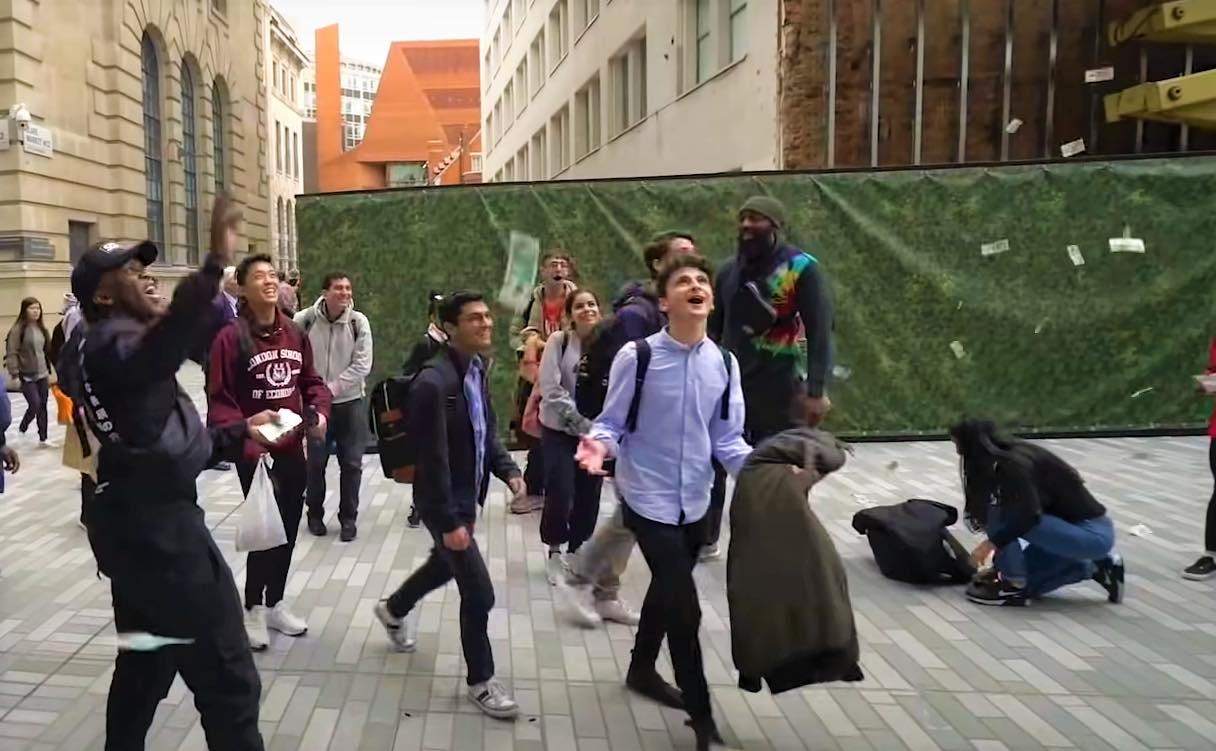 It is November 2019. At LSE, outside the Centre Building, a small crowd has gathered. Sporting cries fill the air. At the centre of the group is a young man performing one-armed push-ups. Above him stands one of the UK’s most famous media personalities. Olajide Olatunji, 26, better known as ‘KSI’ has offered the student £200 to perform his feat as part of a YouTube video involving spending $100,000 within one hour. The student completes his challenge and receives his prize. Like a magician, KSI throws a pile of money into the air and disappears down the reaches of Clement’s Inn, leaving students to lap up the rainfall of five pounds notes left on the ground.

This may not be KSI’s only foray into LSE territory. One can easily imagine the $20 million-net-worth entrepreneur returning to LSE for a talk on his business success. He is in-your-face, controversial, but also introverted and often warm and relatable; it is KSI the character, not the gamer, that has caught worldwide attention. In the Esports world, saturated with endless content and competition, KSI has proven that personality alone can be leveraged to capture a worldwide market – be that for better, or worse.

In a medium such as the internet, where the consumer’s attention is continuously courted, KSI’s unique outlandishness has propelled him to stardom. One can see flickers of KSI’s notorious comedy in his very earliest GCSE ‘Physics rap’ and ‘Chemistry rap’ videos on his first late-2000s channel ‘JideJunior’, which features weird imagery, meme-oriented jokes, and disorienting transitions. KSI continued his growth in his next channel ‘KSIOlajideBT’ (now ‘KSI’) in 2009. There, KSI’s videos of him playing Fifa further revealed his skill in captivating his audience. His videos are typified by bizarre interactions with fellow online Fifa players and his own family. With Esports competitions and videos mainly centred around the aptitude of an individual player or team, KSI’s new approach was trailblazing for its time. It cemented KSI as one of gaming’s most famous stars. Whilst Esports champions such as fantasy game ‘League of Legends’’ experts ‘Faker’ and ‘Flash’ compete in front of millions of viewers online and thousands within specially built Esports arenas, KSI’s net worth still eclipses that of the top three richest competitive Esports stars (‘N0tail’, ‘JerAx’ and ‘ana’) combined.

KSI’s versatility in growing his brand was on display when he drove the monumental rise of white-collar boxing between 2018 and 2019. After KSI’s bout with fellow YouTube star Joe Weller during February 2018 – the most viewed amateur boxing fight in history, KSI followed up with the even more prominent ‘KSI vs Logan Paul’ two-fight series, culminating in KSI’s momentous victory against his arch-rival during November 2019. KSI goaded his competitors in the build-up to these fights, combining the attention gained with the dedication he showcased in training. KSI’s boxing popularity has spurred on further amateur fights such as the planned 2021 fight between strongmen Eddie Hall and Hafthor Bjornsson.

KSI, however, is also a controversial figure. His removal from the 2012 Microsoft ‘Eurogamer’ competition due to alleged sexism highlighted the often challenging forms KSI’s ‘edgy’ comedy could take. In addition to this, KSI frequently utilised ‘comedic’ bit during his early 2010s videos which featured his ‘rape face’ – a forcefully absurd expression that KSI primarily associated with the imposing (now retired) footballer Emile Heskey. This highlighted the stark problems KSI would face when he pushed his early comedy towards a primarily male, early teenage audience. KSI has since apologised for both controversies, but for many the acts themselves are still seen as exacerbating the stark divide between male and female participants within Esports. In handling his controversies, it seems that KSI has learned from his past mistakes. Whilst KSI’s outlandish, brash character propelled him to the top, his social intelligence has kept him there.

KSI has shown exceptional networking skills in liaising with other YouTube stars and collaborating with famous rappers including Rick Ross and Offica, alongside forming the highly successful YouTube team and multi-million-pound business: ‘Sidemen’. Despite officially leaving the ‘Sidemen’ in 2017, KSI cemented the group’s popularity: 20% of all Youtube views in the UK during 2019 were from ‘Sidemen’ videos, with the group racking up more than 600 million views on their main channel alone.

KSI is far from a perfect figure, as his controversial past proves. However, what was clear from KSI’s ‘Sidemen Spend $100,000 in 1 Hour Challenge’ was the laughter and attention KSI instantly gained from the LSE crowd around him. Such attention will long continue. With a predicted revenue of $1.8 billion by 2022, Esports will be further boosted by KSI: pushing forward the sport’s new frontier. KSI became famous through gaming; but Esports, in part, has gained prominence through him.