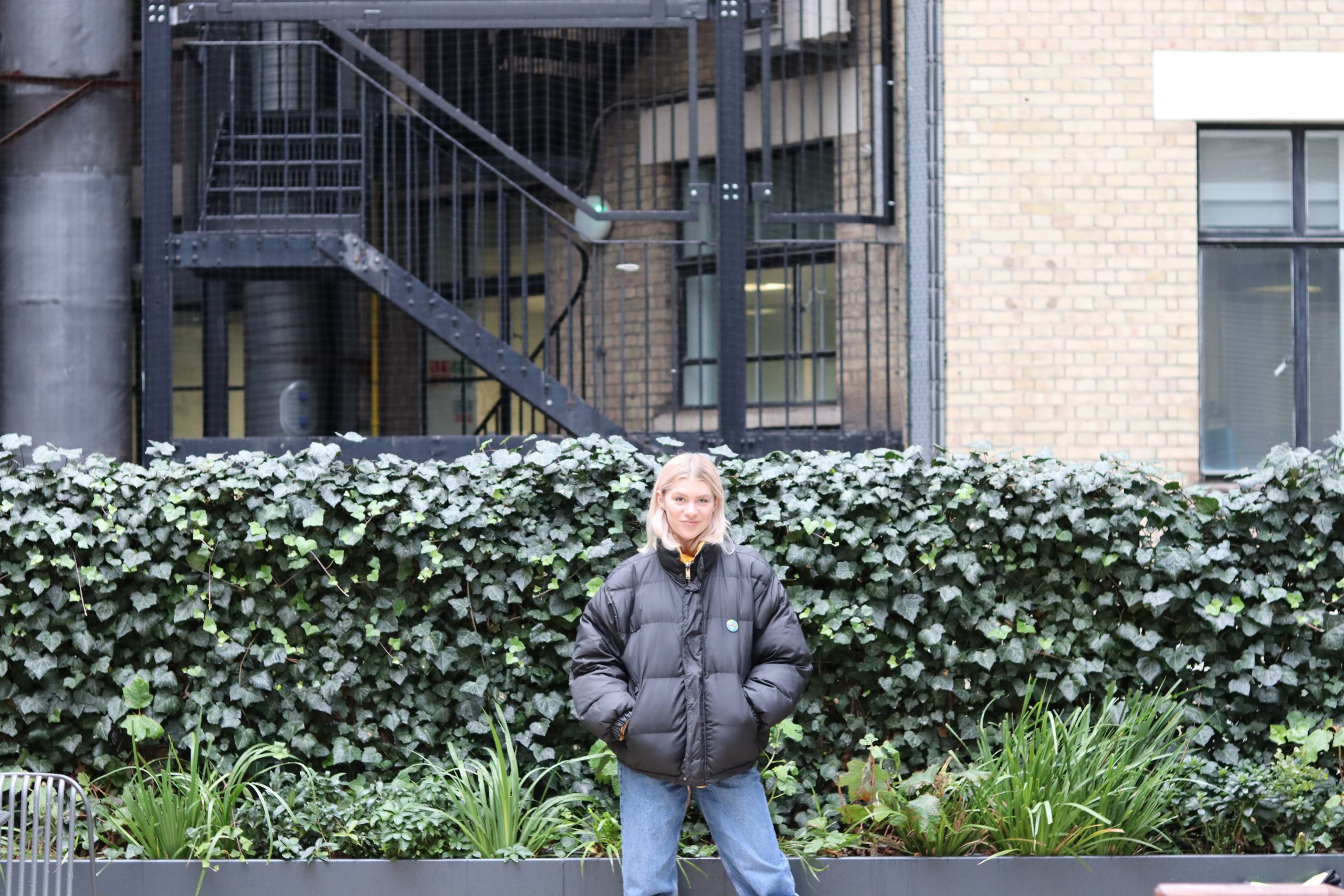 Nancy and I met on a rainy October afternoon. Waiting outside the NAB, I had an idea of what to expect from her: this was a law student with a law podcast and law plans. So when Nancy showed up in her bright orange jumper, she was a bit of a surprise. Talking with her turned out to be the brightest thing about that afternoon.

We sat ourselves down outside the library, hot drinks in hand, the not-so-soothing sound of construction in the background, and jumped straight in. Although she is currently involved in a tonne of law-related activities, Nancy did not come into her degree wanting to be a lawyer – “I just wanted my brain jacked”. This made a lot of sense to me, as Nancy and I spoke about how in applying to uni, we both felt like law was a “safe option” in that it left a lot of career paths open. The decision to pursue it as a career is a recent one, she loves her degree and, seeing as “I’ve put all this work into my degree, you know I might as well qualify.”

The specificity of the course does seem to prod people into pursuing some kind of career in law, but the commercial law emphasis comes from – and this will surprise no one – LSE.  “An LSE law degree is probably one of the most vocationally orientated degrees that I know of, it’s certainly more than sort of other equivalent degrees in the UK. And so when you arrive there’s this massive emphasis on getting a training contract.” Nancy got the impression that everyone around her had a clear idea of where they were going and from the get-go, as if everyone were “already scheming.”

This isn’t simply because of the students LSE attracts; firms and chambers “sponsor the shit out of the Law department”, in the hopes to “wine and dine” our law students – explaining how the Law Department swings their swag, the plum spots in NAB, and all those networking occasions.

From the outside, the law department feels like a members-only club, with their (pre-’rona) balls and boat parties with open bars. The intensity and uniqueness of their academics also seems to require that they mainly hang out with each other. I told Nancy this, who said the potential cliqueness of the course “flows from the sense of like, ‘we are going through it, gang.’ And so everyone kind of relates to each other on that level.” There is camaraderie, she said, albeit amongst the competition and rat racing.

On joining LSE Law, Nancy said that “you’d have to be some kind of psychotic robot if you weren’t overwhelmed.” It is for this reason that Nancy has done a lot of her projects at LSE: so that future law cohorts have a smoother transition into study than she did. She adds that “it was about sort of giving back to my first-year self in a way.”

Nancy has done this by trying to leave LSE with structures in place to assist the student experience at large, with a two-year-long changemakers project alongside partner Natalia Madrid focusing on pastoral support at the LSE. They came up with the solution to introduce ‘families’ across the entirety of the LSE undergraduate community, which she hopes the administrative team at the school will take note of. She also wanted to help first years in the Law programme by running an LLB Helpline on Instagram – @llb.helpline – where first-years can ask questions and get in contact with older students for advice. It feels really good to even be able to tell people “Hey, you’re going to be fine… we’ve all been there, you get through it.”

Nancy also founded the legal podcast ‘The Nth Cause’, alongside her co-founder and fellow third-year law student, Taha Almasri. They launched in October 2019 and have been going strong ever since: “I think we’ve produced seven podcasts with both high profile academics and industry experts, as well as student discussion, all on contemporary legal topics and problems.” Nancy turned to me and asked if I had yet to watch the Netflix documentary The Social Dilemma; the last episode they’d recorded covered social media, data companies, and the role law can have within the issues brought up. To her, the podcast is a way to look at “contemporary topics like that with a legal lens, which kind of looks at exploring and recording, defying, nailing down what the real issues are.” The two have partnered with the LSE Law Department who have “sponsored and supported the podcast from day one.” This girl’s love for law is abundantly clear; there’s genuine passion in the way she speaks about the episodes they’ve come out with and the topics they’ve been able to cover.

Earlier in October, they launched a new campaign called ‘Nth Pursuits’ for the one-year anniversary of their podcast: “We have various new projects in the pipeline for this rebrand, but foremost we have launched a topical legal essay competition for LSE and other undergraduate law students from a few other collaborating law departments in the UK. We’ve been lucky enough to have Church Court Chambers sponsor the competition, as well as LSE Law, with some exciting cash and academic prizes to be won, as well as features on an Nth Cause podcast and our new writing platform – ‘Nth Causes‘ – which will be launching later this year.”

Law is the plan, but in an ideal world, Nancy’s future would also involve Japan. She’s visited a few times as a teenager, initially because of scouts. “In the summer of 2015, I just fell in love with Japan, frankly.” Part of the experience included a homestay in rural Japan with a local Japanese family, only one of whom spoke English; she only spent three days there but “something clicked.” So after school, feeling a little like she hadn’t figured out exactly where to go to uni yet, Nancy worked in Tesco at the deli counter, saving up. “And then I emailed his family and was like, Hey, can I come back? … And so I ended up going out to Japan by myself. I’ve just decided I want to spend at least a portion of my 20s there.”

It’s no great revelation that the law department is a particularly intense corner of LSE, but it’s comforting to know that people like Nancy, who have a real love for their course, are being audacious in trying to resolve its faults. She’s certain that wanting to do well at LSE shouldn’t have to come with the baggage of a rough time. We need more Nancys in more departments, more people wearing bright jumpers to liven up rainy afternoons.