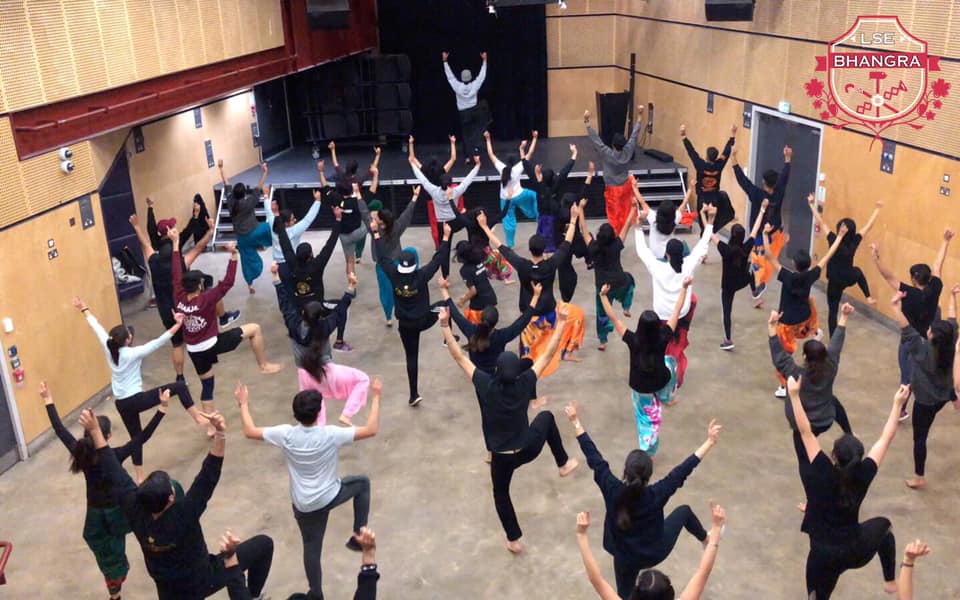 I want to tell stories about thriving pockets of community at LSE in conversational narrative vignettes. They’ll eschew heaviness and pretension. They’ll focus on the very human: thoughts, feelings, and emotions—things no less true than sombre facts. My goal is to reach into the treasure chest of human experiences; I do not intend to opine, critique, review, or analyse. I leave those endeavours to more able writers. My job is simply to report.

Trainers were the footwear of choice for the twenty students gathered at the sixth-floor Exercise Studio. They were there to give it a go at Bhangra — a Punjabi folk dance, as per the LSESU Bhangra Society’s page.

The studio was lit in a harsh glare. Voices clamoured in the enclosed space. Music burst in metallic hunks and twangy loops. A firm voice barely broke through: “Hello, everyone!”

Waving his hands in large, exaggerated movements, the man standing in front captured everyone’s attention. His commanding presence gave way to a gregarious glow. He introduced himself as “Pav.”

Pav made some preliminary remarks. When the room turned stultifyingly silent, he paused and flashed a cheeky grin: “Can we get a little smile, yeah?”

In a splatter of laughter, nervous newcomers were put at ease for the moment. Long enough to pick up the first moves, beginning with the footwork for Phull Punjab.

With each new instruction—more footwork, hand movements, coordinated gestures, small tweaks—more faces took on noticeable looks of puzzlement. Rumbles of ill-timed, far-too-heavy stomps were heard throughout the room. Heads, hands, hems: Every routine suffered from unavoidable mistakes of amateurish but sprightly attempts to keep up.

Upon completion of each sequence, newcomers stopped to catch their breath, adjust their hair, or make futile attempts to cool down. Some, having made the mistake of leaving their jumpers on, hastily removed them. But even in that sweaty, breathless environment exultations of “This is great!” “Keeps the blood pumping!” or “Love the music!” were overheard.

One perspective is to view Bhangra as a cultural peculiarity, consigned to the ‘maybe-not-for-me’ category. Its name and origins, at least, suggest a specific cultural affinity. Yet in this melee of movement and laughter, panting and smiles; everyone, looking somewhat ridiculous, found consolation in the common knowledge that everyone else looked the same. Boundless joy was the inescapable shared sentiment, whether you wore a turban or had pink streaks in your hair, whether you preferred yoga pants or cargo shorts. Music dethroned reason. Self-consciousness flew out the window.

In a little while the newcomers had improved considerably and things were taking shape. Dancers finally in sync, the vague semblance of a dance music video emerged. In these rare moments of inspired form, Pav could not help but snap his fingers repeatedly and exclaim, “Siccckkkkk! Sick, bro!”

The class concluded with a quick group photo, a round of applause, many high fives, and lots of good cheer. But before trudging out of the studio, members sang happy birthday to one newcomer, who made an emphatic thumbs up. The birthday boy said, “This is more fun, to be honest. It’s more personalised.”

Later, I had a chat with Anisha, the society’s Events Coordinator.

“Pav started it in January,” explained Anisha, who, like Pav, is a second-year undergraduate student. “None of us knew each other before uni.”

“During freshers and stuff, I didn’t quite enjoy myself at uni, because I felt like the main form of fun, in terms of university life, was going clubbing and drinking. That wasn’t quite my cup of tea. So the fact that I was able to find something fun that I could do, but, still, was quite healthy, and fit within my values and stuff, and around my education, everything—that was perfect.”

As autumn fades into winter and the workload gets heavier, it may be said that life at LSE can be a little better if you only remember, every so often, to just give it a go. You have to find your own thing or—perhaps— put on your dancing shoes.