The Haystack — a new play by LSE alumni Al Blyth, opening at Hampstead Theatre on 31 January, directed by Roxanna Sillbert.

Outraged by the revelations from the Edward Snowden leaks in 2013 and the mass harvesting of data for security purposes, Al Blyth was inspired to write The Haystack – an explosive espionage thriller set in the digital age. It’s a challenge to the ‘nothing to hide, nothing to fear’ mantra. Exploring the balance between liberty and security, it centres around Neil, a young intelligence analyst at GCHQ, and Cora, an investigative journalist. When Cora unearths a controversial lead, loyalties and ethics are tested to the extreme. The Beaver sat down with Blyth to ask about his experience and process.

Where did your inspiration come from to produce this play?

I think it was partly the Snowden leaks. [They] made me feel a bit uncomfortable…The sort of data surveillance that Snowden was talking about seemed a little bit discomforting, but then I noticed most people I knew weren’t as uncomfortable as I was so that was interesting to me. I wondered why in the British press it didn’t get nearly as much coverage as it did in America and why in America they forced the congress to admit that it was unconstitutional, and why in this country it seemed to go down without much comment, complaint, or outrage… I had an argument at a dinner party within someone whose father was a civil servant — possibly a spy, no idea. The argument ended up boiling down to your standard liberty versus security argument. But, if the government could put a microphone in everyone’s homes, would that be ok if it were to prevent a terrorist attack. He said that it was and I passionately said that it wasn’t. So trying to write a story that would unpack some of the dangers around having a government agency that knows everything about almost everyone is the challenge I set myself.

Concerning the idea around having a government agency which does in fact known everything about everyone, did you do any research prior to writing the play?

I read as much as I could. There’re a few books by Richard Aldwych and there’s also a book called GCHQ which is fantastic, which is about the inner workings of the agency. There is another good book by Patrick Radden Keeth called Chatter which was pretty useful but that was Snowden related. Then of course all of the Snowden leaks, so reading The Guardian, The Independent, The Washington Post voraciously and looking at the slides that were being leaked and so on. … It all sounded somewhat familiar to me, I guess. After LSE, I went to work for the Institute of Fiscal Studies (IFS), which is an economics think tank… It was a combination of drawing on working at IFS in that kind of world and reading as much as I could.

Besides working for a think tank, becoming a playwright is not the typical career choice of an LSE graduate… Is it the career you initially envisaged yourself having?

I was already writing stuff while I was doing my undergraduate. But, I couldn’t really pass up the opportunity to study one of the best courses in the world at LSE. I really enjoyed working at the IFS, but while I was at the LSE I was, in my evenings, gotten onto courses and writing groups at some of the big London writing theatre companies. I was part of Plough, a theatre company where I was for a year. We got the chance to do a project every month which was really great. I won the Westminster Prize because my play was staged professionally, I invited my friends and they came along. I think they were a bit amused though and asked “how is this going to help you get published in econometrics?” Obviously, it wasn’t going to… I kept doing both [for a] while, I was working at the IFS and in my evenings and weekends, I was going these writing groups. Then I started getting paid for the writing. It became harder to call it a hobby, because deadlines are much more serious when someone is paying money for them…

How did your passion for play writing play out while you were at LSE?

Bristol University had an amazing drama culture in its Student’s Union, even for the people who were not studying drama like me could have a good time. I did join the LSE Drama Society as well, but I was only there for 9 months, obviously… I think it’s nice to have a bit of variety for different people, especially for the misfits who don’t quite fit into a box where you 100% know that your degree choice is going to be your life. I think those wider cultural activities can be important, and it was definitely very important to me.

What made you go to LSE and choose to do the masters as opposed to pursuing and developing your experience as a playwright?

I also adore, and still do, keeping up with all of the economic bloggers, especially when writing is getting tough. I also miss having STATA at my fingertips, running a bit of code and the comforting certainty of that kind of work. It wasn’t like a second choice. I really did love it and I still do love it and, in the future, I’m trying to do work which incorporates a bit of both. The reason I chose to do a masters was because I still didn’t know where my future lay and certainly the 5 years at IFS I wouldn’t give up for the world.

In many ways, I imagine this play is a combination of your interests? Particularly your passion for writing and the politics of surveillance.

Yes, definitely! I think on the surveillance side, I am sure that there are lots of students at LSE with well-informed opinions about the trade-off between security and liberty. I think most people don’t think about it too hard and people are usually on board with the slogan “If you’ve got nothing to hide, you’ve got nothing to fear”. What I was trying to do with this play is while there are terrorists and criminals among us, some of the people who have something to hide — say people who are campaigning for human rights, or for civil rights.

Can we say that the notion of “nothing to hide, nothing to fear” underpins the play to a certain extent?

Yes, it certainly does. We have a body of law around [what] government agents can or cannot [do]. Our lives, working and reading have moved online and there is no body of law about that. You can learn a lot more about me and my wife if you were to go through our dropbox account and our email, than you would if you wandered around our flat. It is the more revealing of the two. It does seem bizarre to me that the legal provision is that a government agency can hoover up essentially everything – go through the fibre optic cables and then decide what it is that they want to look for later. That becomes a huge temptation for any government when you have the answer to any question you want to know sitting right there.

What are your intentions behind the play? Is it to spark debate? Is it to allow people to reflect on the government’s role?

It would be lovely if people go home and have a good argument about it. My actual story is fiction, so for people to go home and have an argument about it would be silly, but it is grounded in things that really do happen. Although, largely things that you find out through America than through this country because in America they have a written constitution whereby things are made public…If there were a British Snowden scandal to blow the whistle off, part of the question I think the play is asking is: would we ever find out? Or have we reached a point journalist communication is being hoovered up? I guess the much shorter answer would be: to freak people out!

Considering this is a story that is very close to your heart, how close did you work with director Roxanna Sillbert?

The script was fully written when Roxanna got her first look at it. The only person who got to see it while I was writing it was my wife who is also a playwright. Roxanna was phenomenally generous. The play was very long, it was around 4 hours – longer than anyone can sit in a theatre for. We had to cut a lot, but we didn’t know which bits to cut. It has been a very intense back and forth between the two of us, trying to dig out the real heart of the story. It has been a brilliant collaboration. I don’t think she had really strong opinions about digital surveillance. In a way it’s helpful because she can stand in for the audience as well. There were certain points in the play where we had different sympathies between the characters, which was a bit different to what was in my mind.

How long did it take to write the script?

It took 3 years. I remember thinking I wanted to write something in this area, so maybe even longer. Sometimes when you have an idea and you start writing it immediately, you’re not going to get anywhere. Sometimes, it’s good to let things marinate.

What is your process when it comes to writing?

I don’t go to the page for a long time. I spend a lot of time in our little office with whiteboards, kicking around ideas, going around the characters and themes. We spend a long time trying to work out what the beats of the story are going to be and only then, after months, do we actually get to the page and start writing it. My wife is much better at a first draft than I am, so she can storm across the blank page. I tend to take a different approach, I write a bit, then delete it, then rewrite it. So, in the end, we made a cardboard box and I had to post pages when they were written and I wasn’t allowed to edit any pages that I’d posted and that [helped] me get to the end of the play!

Do you have any career advice for aspiring playwriters?

I think the biggest mistake people make is sitting in their rooms alone and writing full length things: whole movies or even a whole musical. They often think that when they send that off to an agency that they will walk straight into a West End show. For some people that may work brilliantly, it can work but it is very low probability. Theatres are inundated with scripts and they do their best to read all of them. A much better way in, is the writers’ groups that the theatres run… It becomes more of a community and you get on the theatre’s radar, so when you do hand in a script, they know who you are and they already like your work. I’d say apply to all of them, keep applying and then really go for it when you get into those. Be ready to start from the bottom, write lots of little pieces and work your way up rather than expecting to do one script and storm straight in. 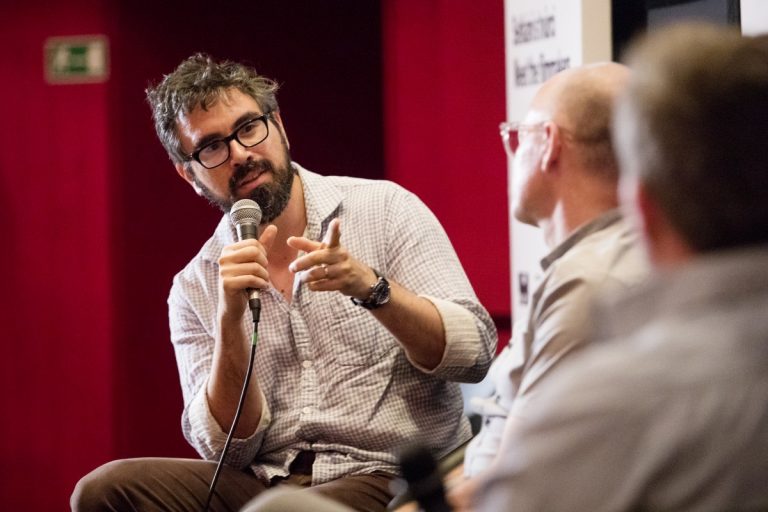 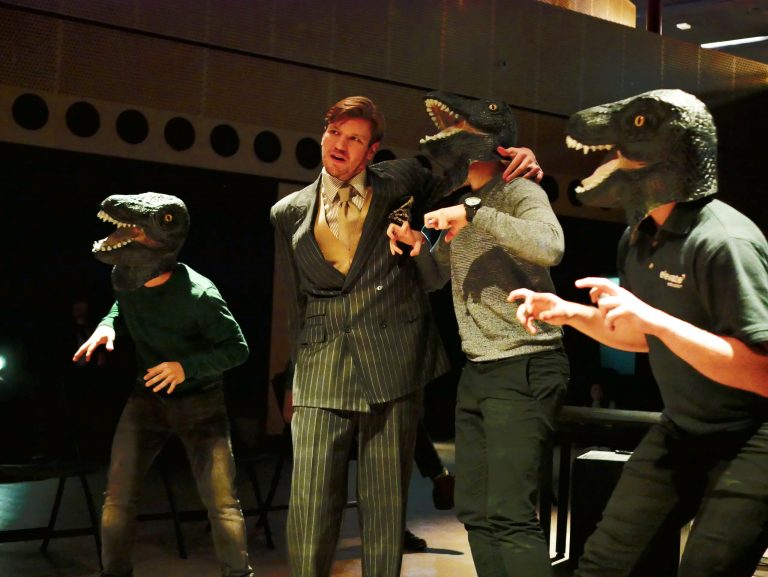 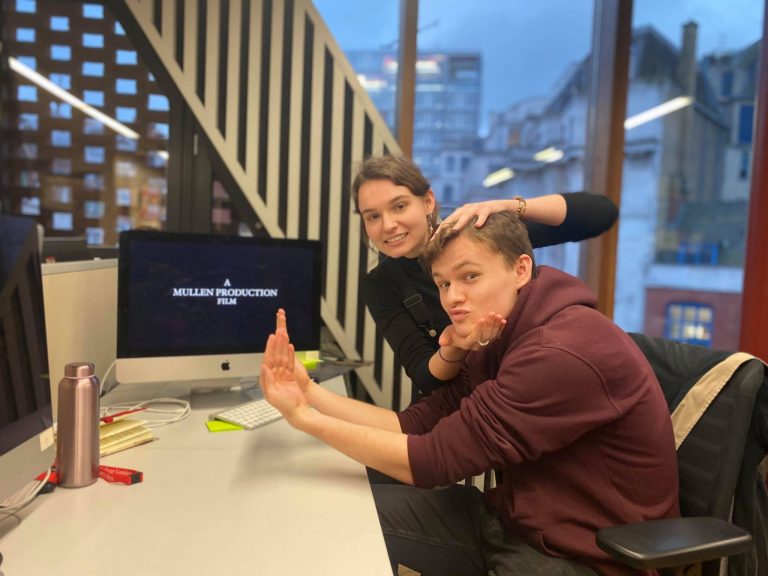