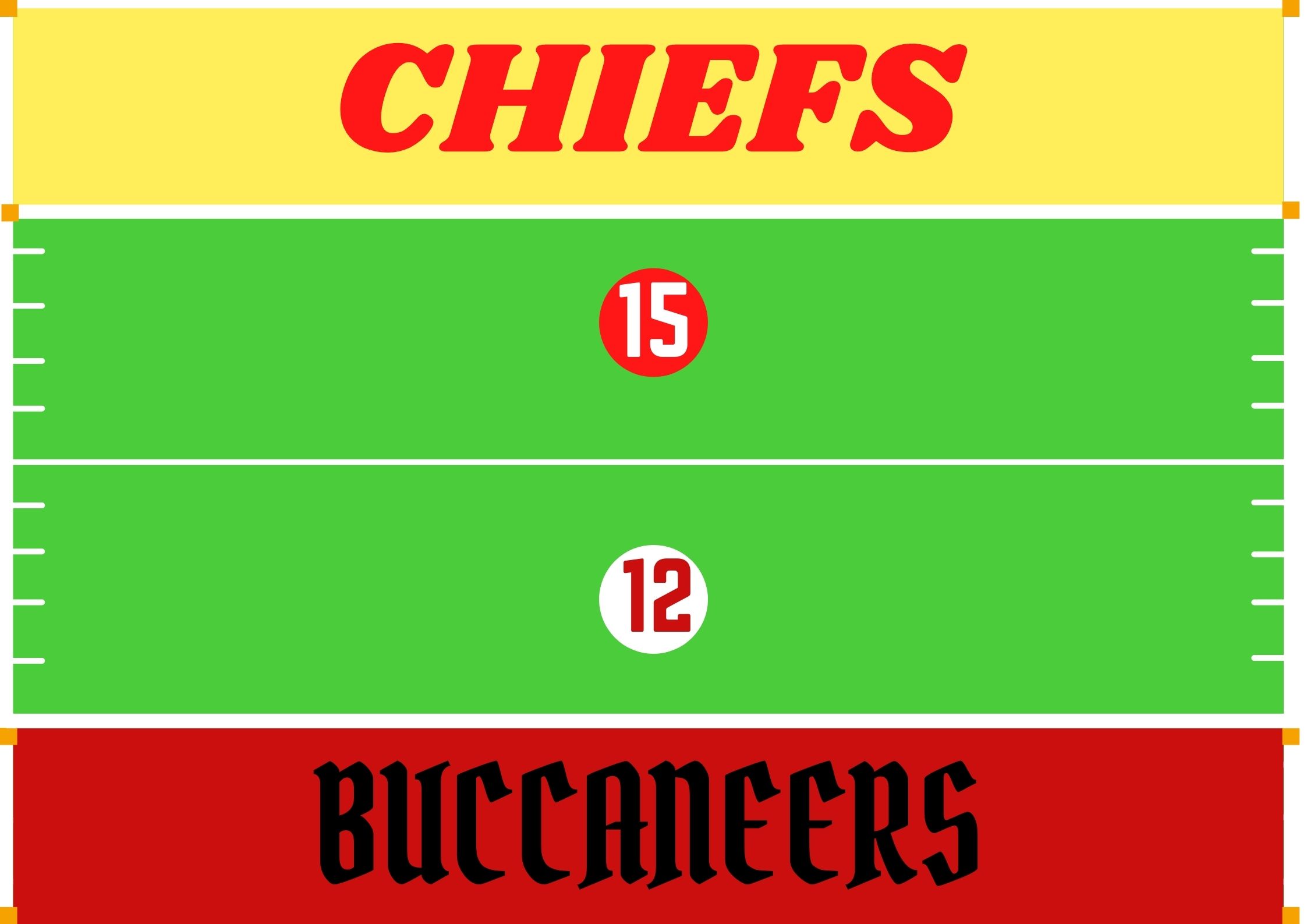 A brief guide to American Football

The Super Bowl is finally upon us. The culmination of a 17-game regular season and subsequent playoffs, two teams will battle it out to win the coveted Vince Lombardi trophy and be crowned the Super Bowl Champions. This year, the Kansas City Chiefs will face off against the Tampa Bay Buccaneers (Bucs). Colloquially known as ‘The Greatest Show on Earth’, the Super Bowl is always a spectacle and is sure to live up to that title this year. For those less interested in football, the Super Bowl always has an unforgettable half-time show, which will be performed by The Weeknd this year. For those new to the sport and considering watching, here’s a far from in-depth guide to how the game is played.

Each team has 3 sections – Offense, Defense and Special Teams. Naturally, the offenses will line up against the defenses.

The offense is ma 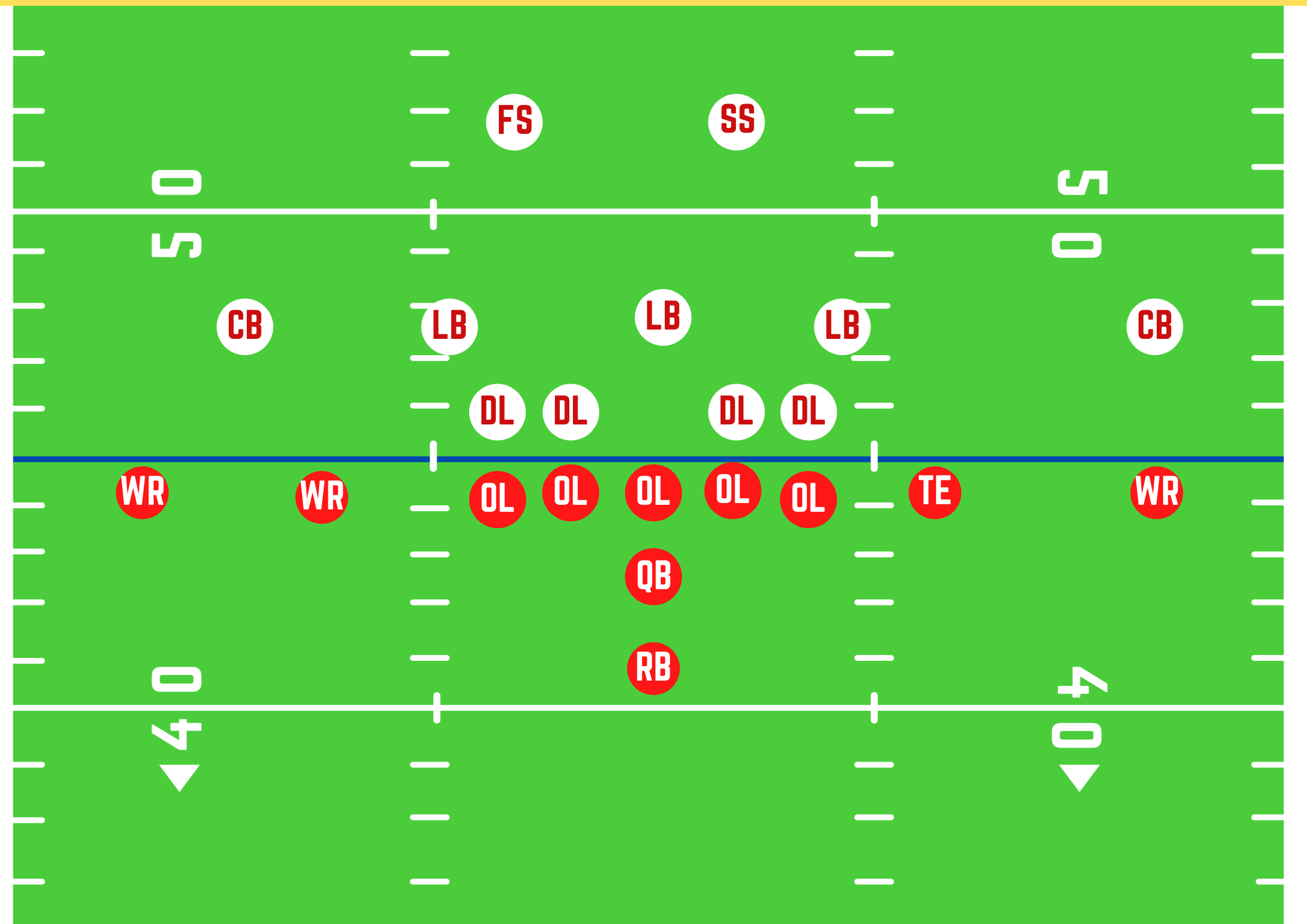 de up of offensive linemen (OL), tight ends (TE), wide receivers (WR), running backs (RB) and a quarterback (QB), whilst the defense is made up of a defensive linemen (DL), linebackers (LB/OLB), cornerbacks (CB) and safeties (FS/SS). The special teams are there to kick field goals, punt, return kicks, and defend against these situations on the other side.

The offense gets 4 downs (attempts) to move the ball 10 yards. If they succeed in doing so, they get a new set of downs. If they fail, the ball turns over to the other team. For this reason, it’s general practice for teams to use 3 of their attempts and punt the ball away on the 4th one to avoid giving the other team good field position.

The game begins with one of the teams kicking the ball to the other. The receiving team catches the ball and returns it as far as they can before being tackled. Where they’re tackled is where their offense starts from.

First Down: The offensive and defensive lines stand along the line of scrimmage (blue) and the ball is snapped to the QB. The QB either hands-off the ball to the RB, throws it to one of his TEs or WRs, o 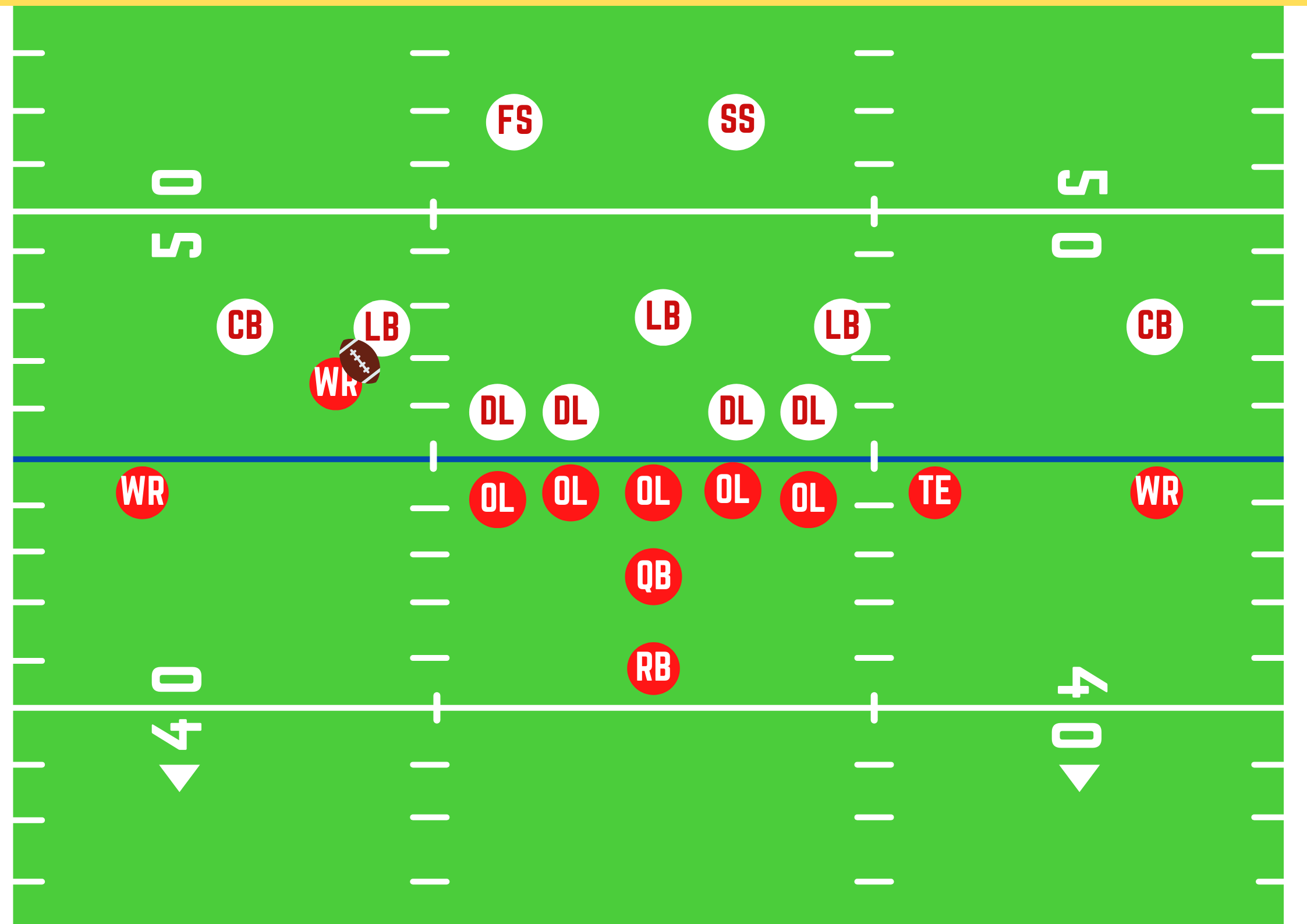 Second Down: The offense has to make 8 more yards to gain a new set of downs – this is known as 2nd & 8. The QB has the same options as before and this time decides to hand the ball off to his running back. The RB makes an 8 yard gain and now the offense has made the required 10 yards – 1st down again. 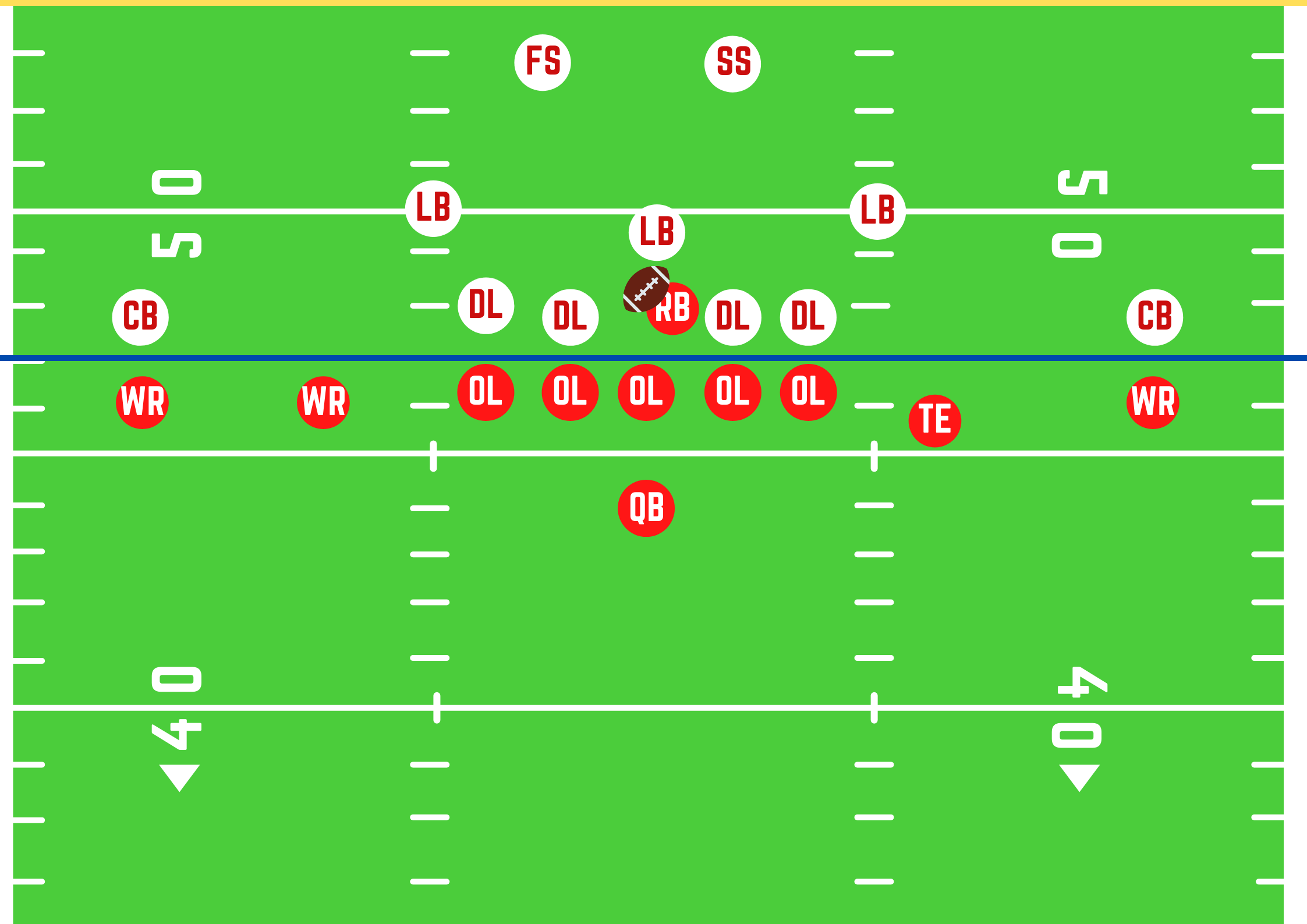 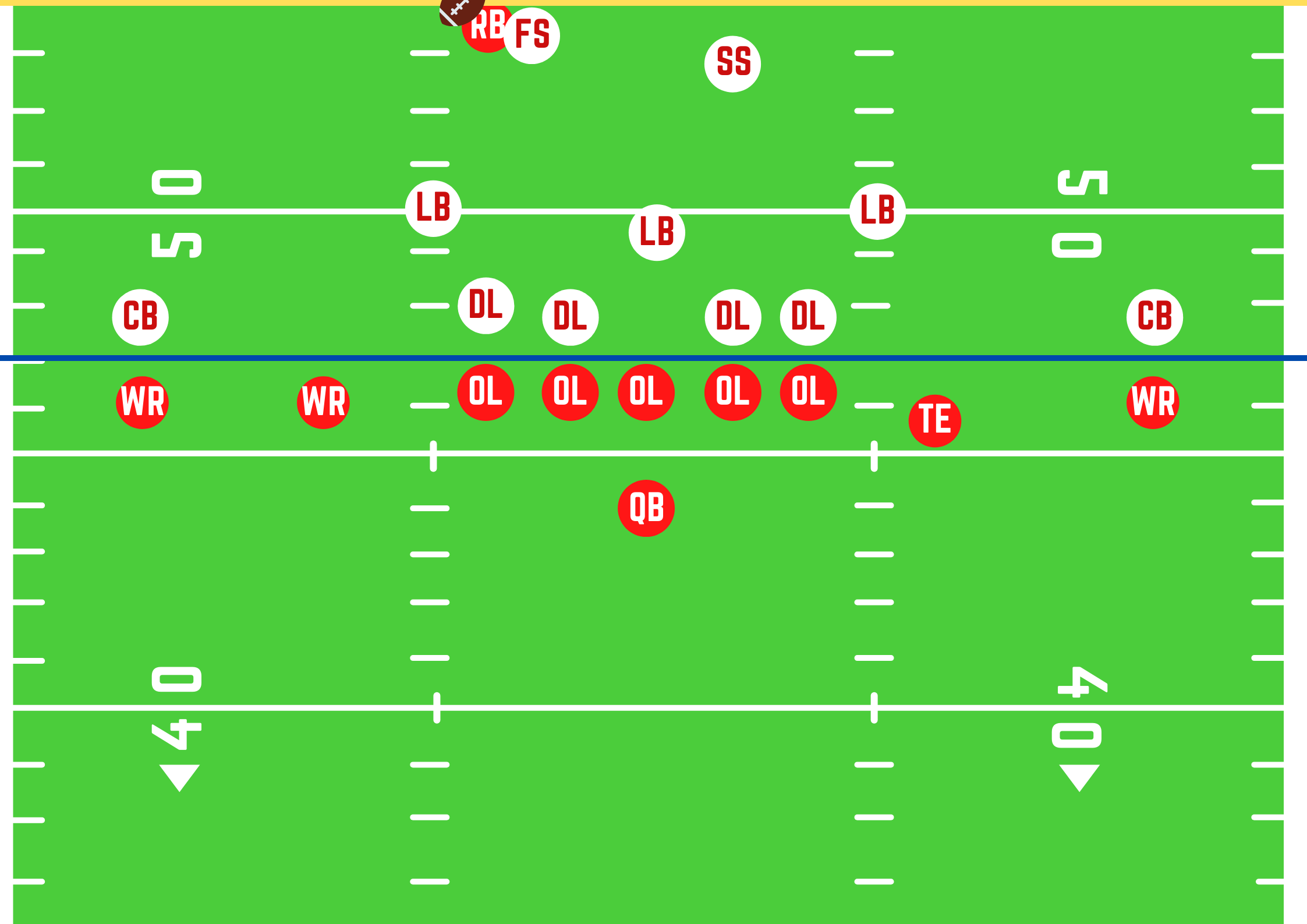 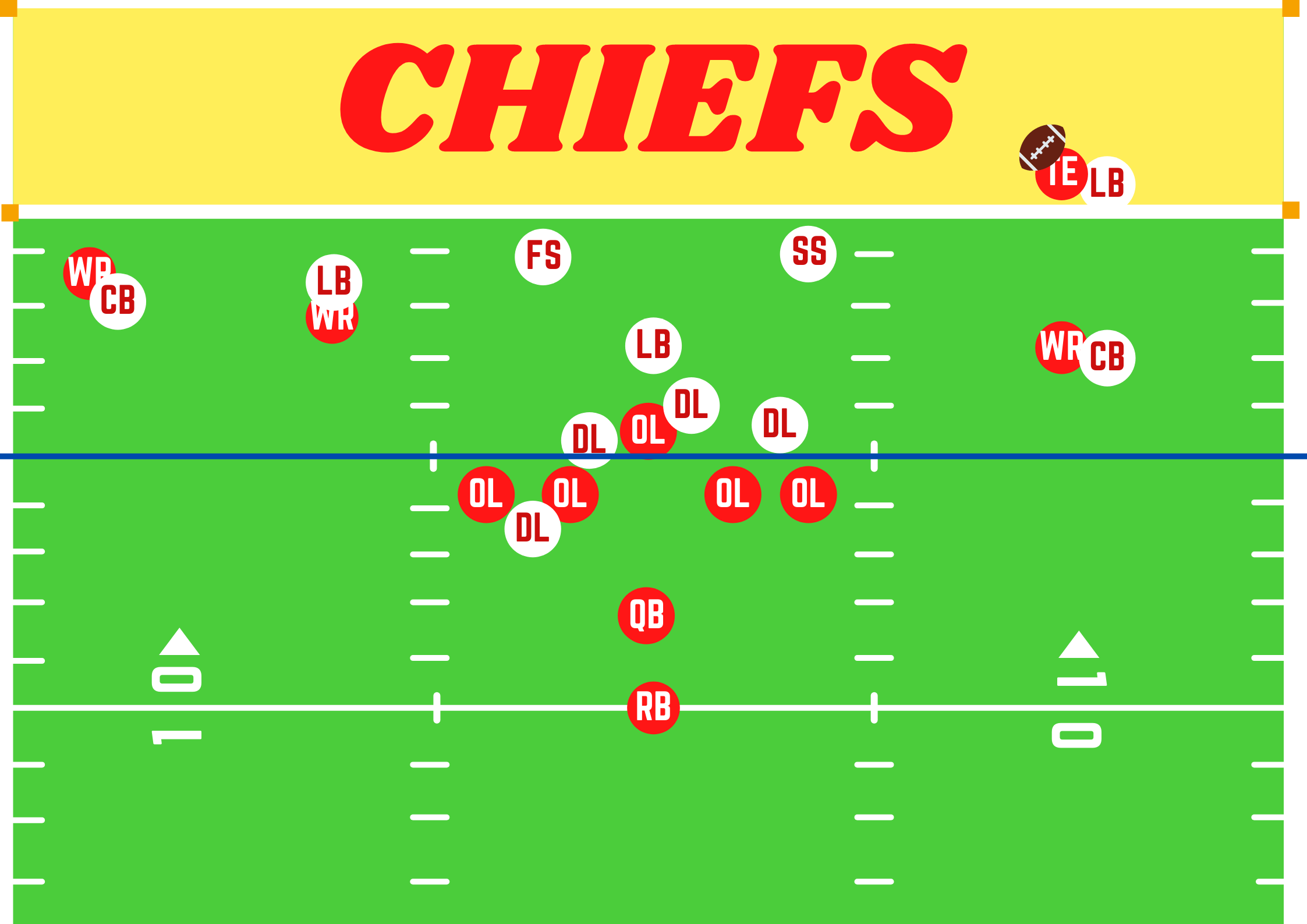 Fast forward a few plays and the offense has marched down the field. They’re now in the Redzone – prime scoring position. If they successfully run or throw the ball into the endzone it’s a touchdown and 6 points. Pictured, the Chiefs QB completes a pass to his TE for a touchdown – expect to see that on Sunday night.

If the defense stops the offense from getting the ball into the endzone, the offense may elect to have their special teams unit take a field goal instead.

After this, the teams switch over and the other offense attempts to score some points. 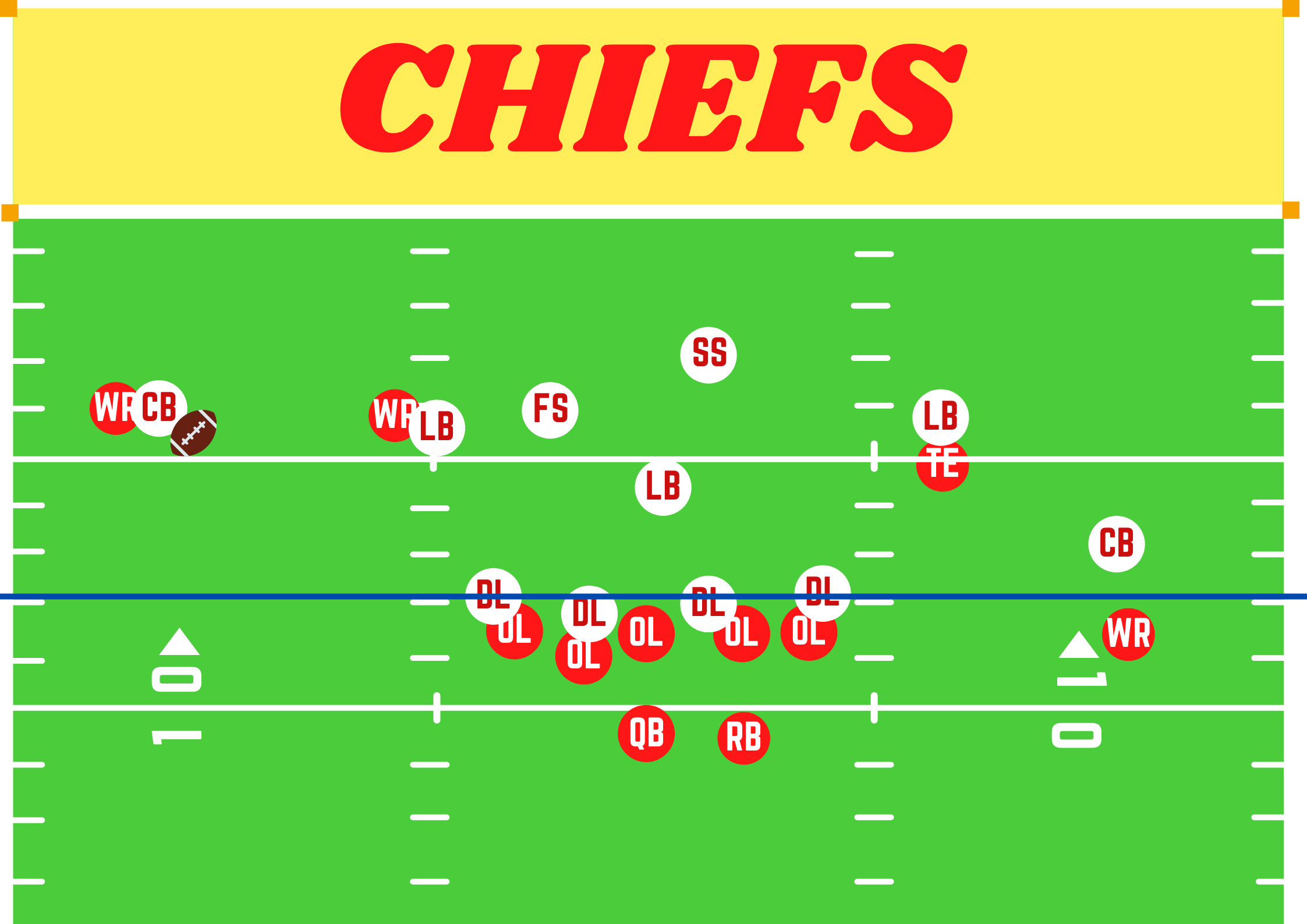 Interceptions: If the QB throws the ball to the defensive team, it is an interception and the possession switches over. This is usually called a          ‘pick’ and can be returned for a touchdown. 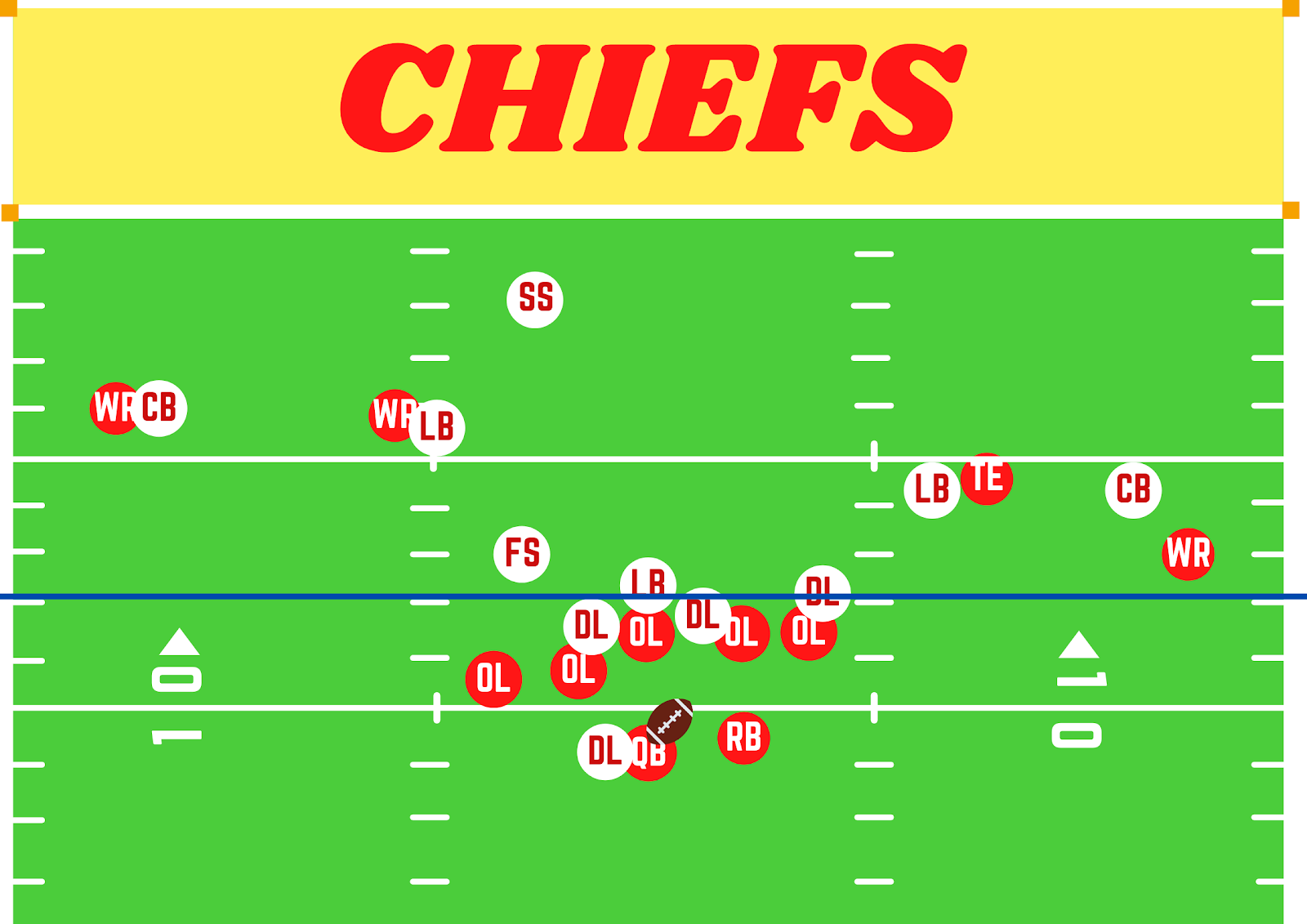 Sack: The defensive line tries to put the QB under pressure on every play. If they succeed in getting past the offensive line and tackle the QB behind the line of scrimmage, it is called a sack. This creates negative yardage for the offense.

A bit of backstory…

This edition of the Super Bowl has generated extra excitement for a few reasons. A lot of the attention will be on the man under centre (QB) for both teams. For Tampa Bay, Tom Brady will be playing in his 10th Super Bowl at the grand age of 43. This is an achievement that means he will have played in 18.2% of all Super Bowls since its inception. He’ll be aiming for his 7th individual win and first with the Bucs. On the other side, QB Patrick Mahomes will be hoping he can fire the Kansas City Chiefs to back to back superbowl wins after they beat the Sanfrancisco 49ers last year – in that match he was voted Super Bowl MVP.

The Buccaneers got off to a slow start this year, but rallied to an 11-5 regular season win-loss record. They followed this with 3 impressive playoff wins to reach the big game. With one of the best ‘superstar rosters’ in the league, they’ll be relying on their dynamic offense and big name defensive stars to fire the franchise to its first ever Lombardi trophy. Key to the game will be controlling the explosive Chiefs offense. The Chiefs picked up where they left off last season and dominated the regular season, finishing 14-2. They’ve been rarely troubled on their journey to a second consecutive superbowl and have been taking every opportunity to show off one of the league’s most exciting offenses. Big game players such as Tyreek Hill (WR), Travis Kelce (TE) and Tyrann Mathieu (S) will be keen to leave their mark on the game.

Whoever wins, it’s sure to be an entertaining game of football with both teams likely to throw caution to the wind. Hunker down on Sunday night and enjoy the show.