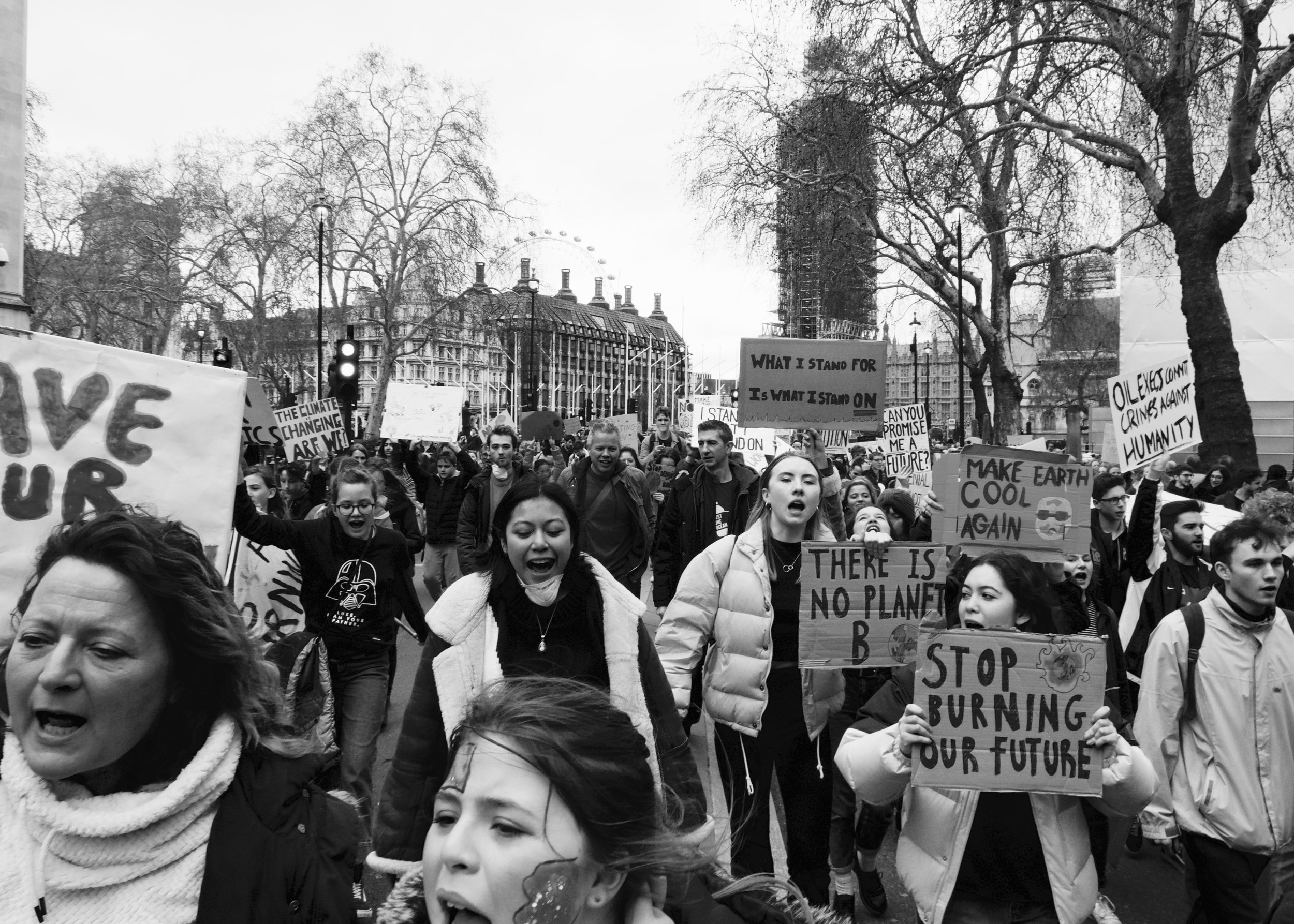 A Changing Climate at LSE

The past year has seen great shifts in public perceptions of climate breakdown, partly due to the media storm that has followed Greta Thunberg’s Fridays for Future and the launch of Extinction Rebellion. Changes at LSE have only followed this.

2019 saw activist groups at the LSE pass a major milestone for mass mobilisation. In fact, LSE has not seen protests and activism like the School Strikes for Climate since 1968. Thousands of LSE students banded together three times over the past year to call upon the government to act, and for society to reevaluate the way it operates.

In January, student activists organised a coalition of LSE societies and clubs, who would organise their members to support a ‘March for the Climate’ on the 15th of March 2018.

30 societies met to discuss the strike itself, coordinating direct action outside the university (a banner drop from the Old Building) on the week of the strike. Groups also hashed out predictable political differences.

From the anti-capitalist leanings of 68, Earthrise Journal (which both launched last Michaelmas term) and the LSESU Marxist Society, to the neutral LSESU Geography Society, PULSE Radio and LSESU Men’s Rugby, to the centrist LSESU Liberal Democrats, it was a true cross-cutting coalition of interests and political leanings. This widespread support was key to its success, and would help establish an environmental force at LSE: for its second strike on the 24th of May and for the General Global Strike for Climate on the 20th September.

Student Climate Action is a student-led direct action organisation, whose members consist of students from LSE, as well as UCL and King’s College. It was mobilized by existing campus organisers to strengthen the voice of university students in the climate strikes movement, currently dominated by UKSCN (primary and secondary schools) and to a lesser extent the youth division of Extinction Rebellion.

London is the most surveilled city in the world, and activists are more than likely put on a watchlist for participating in any protest. Facial recognition technologies have been deployed at several major UK protests this year without the media attention such shifts in policing deserved.

At King’s College, politically active students of colour were prevented from entering campus buildings, despite having exams, because the Queen and the Duchess of Sussex were due to visit.

At our very own LSE, student activists have also been targeted and blocked from entering buildings while staging protests. Both incidents suggest the two closest universities to us are keeping a record of student political engagement: including names and photographs.

This shouldn’t dissuade participation. By showing up in great numbers and demonstrating our care and knowledge of the ecosystems on which we depend as well as the people who are being severely impacted by the environmental crisis, we are not idealistic or naive. We are informed, often carefully considered, and quite frankly – desperate for change.

Protests are an obvious political route, but individual adjustments – where they can be made without expense or severe inconvenience – can help shape attitudes towards how to live with greater respect towards the environment.

But don’t forget – only 100 companies are responsible for 71% of global carbon emissions produced between 1988 and 2015, and if they stopped using fossil fuels in favour of alternative energies it would vastly eclipse our combined individual efforts.

LSE have also achieved zero waste to landfill, it has ‘save water initiatives’ in place (which you might notice in halls) and crucially, the academic work of the Geography Department has made it the 2nd best in the world – which informs LSE students, the public and policy. Feel free to read LSE’s 2017-18 Sustainability Report for more information.

While students have been striking, a group of academics, Grantham Institute employees, staff and a handful of students – deeply concerned about climate breakdown – have been devising strategy in attempts to transform LSE. Following in the footsteps of Bristol, Newcastle and Glasgow universities, over the next year the Climate Emergency Collective (CEC) will call upon the Directorate to announce a climate emergency, with an emphasis on the university taking concrete action to ‘tidy up its own backyard’ when it comes to divestment and emission reduction. They argue that LSE could always do better in the face of global ecological collapse.

While the LSE espouses sustainability, they say, the collective is “aware that the LSE has not achieved the carbon emissions reduction targets set out in its 2011 Carbon Management Plan, with the 2017 unachieved target moved back to 2025. Furthermore, we are aware that `Scope 3’ emissions – including staff travel, water, waste and procurement – are not included in the School’s calculations of its overall emissions. The School’s public statements on its emissions reductions are therefore deeply misleading.

“With all of the above in mind, we call on the LSE to immediately declare a Climate and Ecological Emergency and to act accordingly….

“As a leader in social science, we will demonstrate that we are able to implement democratic social mechanisms to match the scale of the challenge we face. Members of the LSE community have already shown initiative, acting where the rest of us have been silent: the School must invest resources in supporting students and staff self-organising in response to the emergency that they are inheriting, including a dedicated organising space for climate activism managed by students and autonomous from the School.

“We have chosen the path we want to take and are waiting for the School to follow. Where the School takes this challenge seriously it will have the full support of staff and students. Where it drags its feet we will take action to return it to the centre of attention. This is an emergency.”