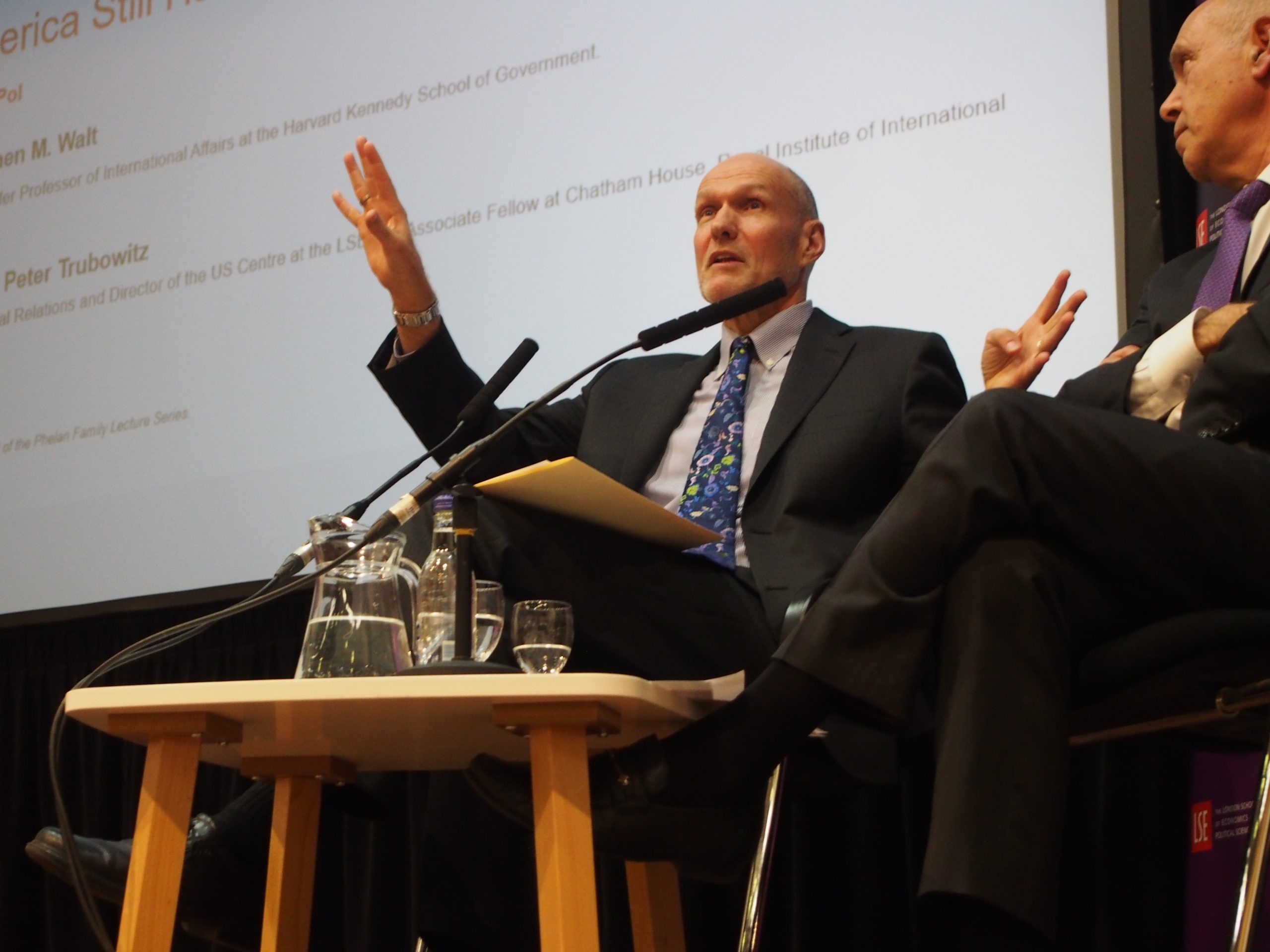 At LSE, Walt voices harsh criticism​ of US foreign policy

On Monday 21 October, The LSE United States Centre hosted Stephen M. Walt, Professor of International Affairs at Harvard University. He is known as one of the leading proponents of defensive realism. The talk, titled “Can America Still Have a Successful Foreign Policy?” was moderated by Professor Peter Trubowitz. Walt talked about the limits of the existing foreign strategy of the US and alternative policies from the realist viewpoint. His sharp criticism of Donald Trump’s foreign policy and perspective on the balance of power in the world stood out during the talk.

Walt, widely known as the author of The Origins of Alliances (1987), which discusses the balance of threat theory, stated that the US succeeded in its foreign policy in the past, but lately, it faces tough problems. China’s power is growing steadily and Russia has seized Crimea, while US leverage has been declining through costly disastrous wars in Afghanistan and Iraq.

In line with the decline of the influence of the US, he expressed strong concern about the retreat of democracy worldwide by quoting data from Freedom House and recent increasing nuclear armaments in North Korea, India and Pakistan, as well as the intensity of political confusion in the Middle East.

Regarding the root of this intractable situation, he highlighted the failure of “liberal hegemony”. He defined this traditional strategy as “not the sense of being left-wing but the sense of trying to promote the classical liberal values of democracy, markets, rule of law and human rights which the US has been attempting to spread”, and argued that coercive strategy was doomed to fail.

Instead, as an alternative policy, he emphasized the effectiveness of the “offshore balance”, the strategic concept which uses allies’ regional powers in general. According to Walt, there are key centres of power in Europe, Asia, the Persian Gulf and all over the world. Therefore, the US can try to pass the buck to these regional powers to uphold the balance to save American lives and wealth.

Specifically, he mentioned that the American military’s role in Europe for deterring the threat of Russia should be gradually reduced. On the other hand, he pointed out that the US should still focus on balancing China with other allies in Asia because this country is “the only potential regional hegemon.”

In tandem with the “offshore balance”, he insisted on the necessity of efforts to recover trust in the US, and enumerated four factors which damaged its foreign policy: (1) big domestic issues such as inequality of jobs and education, the opioid crisis and gun violence (2) deep partisanship which makes people vulnerable when foreign powers try to interfere with the politics of the US (3) declining trust in the US due to the domestic political and social divide  and (4) deterioration of the American image and brand which led to a decline in its influence.

Walt criticized Trump’s foreign policy as “unprecedented in our history” and cast doubt on his peculiar stance that openly questions NATO’s importance and dislikes the EU. Moreover, Walt pointed out that Trump’s foreign policy is “not smart”, and if Trump wants to confront China over trade politics he should pick a fight with all other major trading partners around the world, instead of pulling them together.

“We should not abandon our political values,” Walt said, “the best way to promote liberal values would be to make the United States the kind of country and society that others observe, admire and seek to emulate.”

After his talk, there was a wide range of questions regarding regional conflicts and the prospect of a balance of power in the world, seeking the thoughts of the prominent realist. This event was held in conjunction with the book launch “The Hell of Good Intentions.”