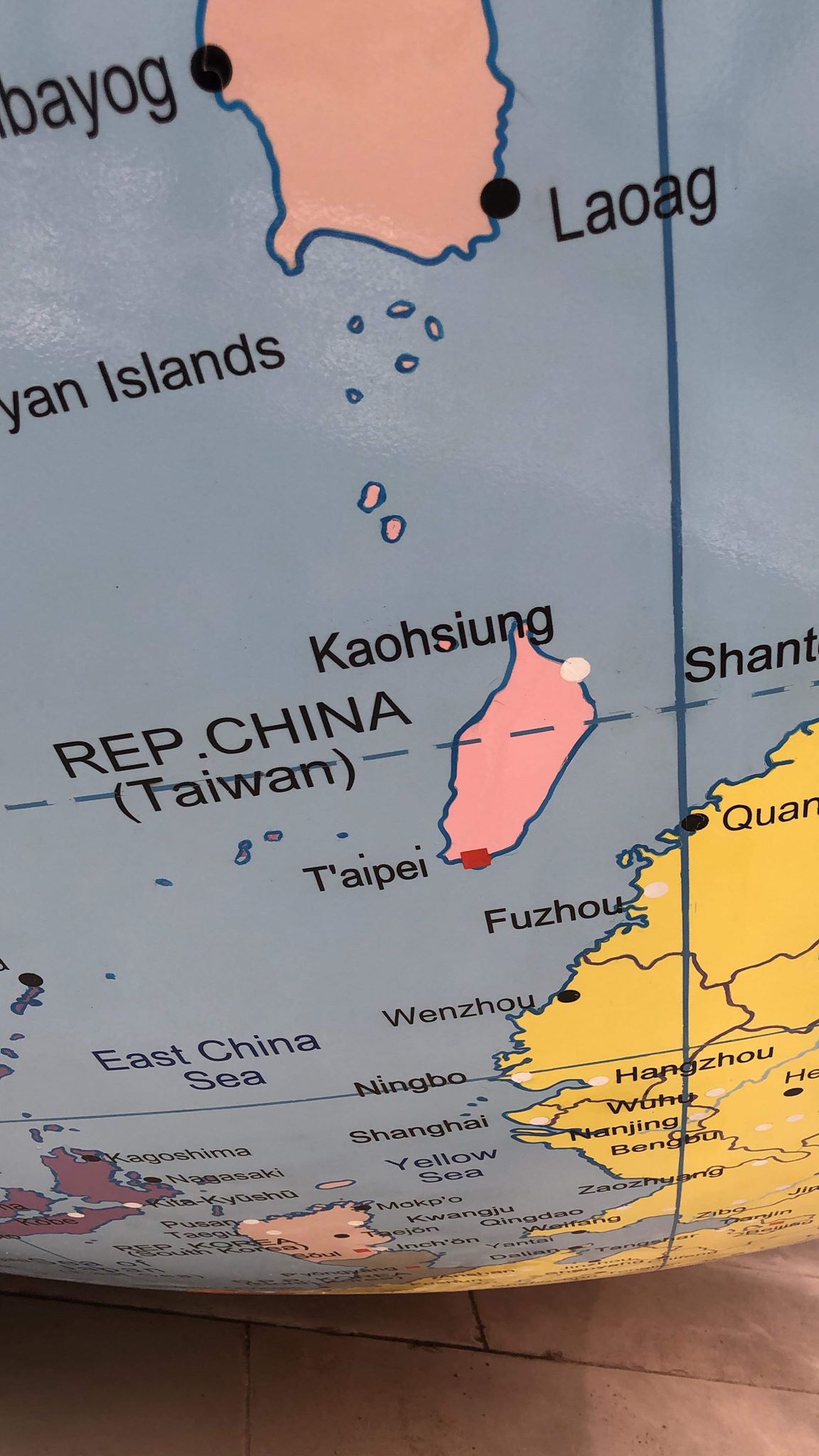 This article previously referred to Taiwan as recognised by the UN as part of the Republic of China (ROC). The UN does not in fact recognise the island of Taiwan’s formal independence or sovereignty.

Ten days after it was installed, Mark Wallinger’s sculpture ‘The World Upside Down’ has received its latest backlash after a group of Chinese students protested its portrayal of Taiwan as an independent country.

The People’s Republic of China (PRC), which is depicted as yellow, has long contested that Taiwan, displayed in pink, is not a separate country but rather a break-away state.

LSE is reported to have promised the Chinese students that complained about Taiwan’s independent status that, because Taiwan is depicted as part of China on UN maps, the two countries would be repainted in the same colour, with the existing lettering kept the same. Minouche was present in the meeting, alongside representatives from the Internal Communication Office, Directorate and Faith Centre.

Global Mapping, the cartographic publisher used by Wallinger’s studio to produce the map, told The Beaver that the map used is not a UN map. There is “no definitive UN map…we use the UN as a guide but there are times where you have to vary from that to sell it in a certain area.” They added that Wallinger’s studio chose the 7 colours used.

In the production of a map, they said, “there is no way you will satisfy everyone in the world. We go by international convention as much we can to please as many people as we can.”

Huang told The Beaver he thought the meeting would be a dialogue, but instead it seemed “the School had already made the decision…the meeting was only about letting us know the outcome…[they] didn’t give us enough time to speak”, and the meeting was framed as the School telling the students what they had decided. While LSE “insisted” they were using a UN map to guide their decision-making, they did not refer to a specific map.

“I’m upset about it because I feel that LSE are not trying to take responsibility for the situation and are just using the UN as an excuse. It’s like they are trying to be neutral, whilst not being neutral at all.”

Huang added that when the Chinese representatives suggested a problem with Sino-Indian borders, the “Director immediately took note in her notebook.” Huang has not received an update regarding the matter since the meeting.

The tension has received international media attention and responses from politicians. On Friday, LSE amended their position, stating that they are undecided on the issue.

In an open letter to Minouche, Taiwan’s Foreign Minister, Joseph Wu, said: “The truth is that Taiwan is a sovereign democratic country, not part of any other. If the sculpture is changed as planned, it will lead young men and women everywhere to believe that LSE bows to the pressure and bullying of Beijing.”

The attention of Parliament’s British-Taiwanese All-Party Group was also grabbed by the controversy. Lord Rogan and MP Nigel Evans also wrote to the Director: “[amending the globe] is not only erroneous but also contrary to UK government policy, and therefore request LSE to maintain the sculpture’s original colour for Taiwan … Taiwan has never been part of the People’s Republic of China.”

They added: “LSE should not succumb to this pressure as doing so would undermine democratic principles and would constitute political interference in the academic sphere.”

Ssu-Han Yu, a PhD student in the Media and Communications Department, told the Beaver:

“My experience at the Department strengthens my faith in research and education for building dialogues.

“This faith is challenged by the School’s responses to the controversies over the World Turned Upside Down. The School chose to remove dissent from the scene, and its idea of holding one single meeting to silence disagreement is obviously unrigorous. What is expected of the School is to seek for a more creative and constructive way of engaging its students and staff in conversation despite of their differences.”

A spokeswoman for LSE accepted that discussions were being held on the future of the globe, but did not confirm whether Minouche was behind such talks. “The artwork currently does not reflect our understanding of United Nations delineations that it was due to represent.

“We are consulting our community and considering amendments to the work. No final decisions have been reached.” The globe currently stands unamended and LSE has not publicised which UN delineations it is referring to.

The artist, Mark Wallinger, has not responded to media requests for comment. In an interview with The Beaver two weeks ago, he said: “There a lot of contested regions in the world, that’s just a fact.”

He added: “This is going to be a permanent work, so as the years go by, it would be interesting to know what shifts in the world and how far its skewed from the particular version.”