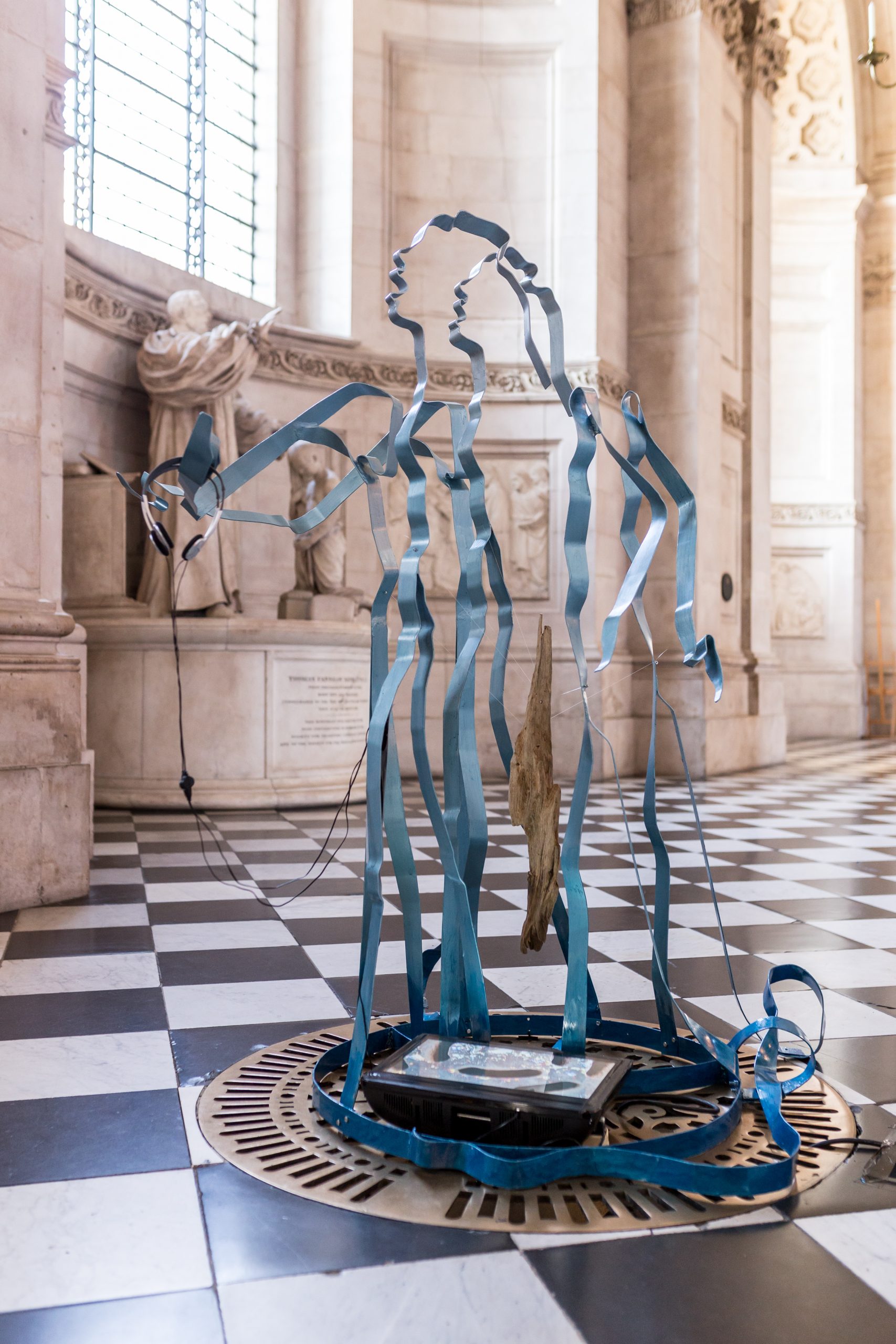 Every time I’ve walked past St Paul’s Cathedral, I’ve wanted to go in, but it was too late, or I had somewhere to be. Without making a point of visiting, I’m not sure I would have made it in. But, on Saturday, I got the chance to attend a poetry workshop held in the church.

The workshop, run by poet Jacob Sam-La Rose and facilitated by St Paul’s Cathedral’s Donna McDowell, focused on our responses to the Stations of Water art installation currently on display. Going in, I assumed the art installation would be in a separate room—maybe tucked away somewhere in the crypt. Instead, the art was displayed on the cathedral floor, integrated with its grandness. Rope was strung from two Baroque columns; a fossil-esque depiction of the longfin eel snaked out from the stone. Cognisant of the power of the cathedral’s interior, the works were subtle; I would have likely missed them had I just been visiting the cathedral.

The subtlety of the art raised the notion of the observed and the overlooked. Intentional or not, the subject the art addressed, water injustice, has similarly been overlooked. As part of JustWater, the exhibition’s intention is to “increase awareness of water justice around the world.” Some pieces discussed water and life, while others pointed to pollution and migration.

The installation made me question the role of context in art. I felt that, thanks to the insight of the exhibition’s artists’ guidance, I was able to deconstruct the puzzle-laden works. I’m not sure I would have gotten as much out of it had I just walked through St Paul’s. I’m not sure that that’s a bad thing, either.

In the end, there will be some art that speaks directly to you. But not all art elicits an emotional response, nor does it have to to be good art. Ideally, art should have an entry point. It should draw a viewer in. But the viewer also has a degree of responsibility to make the effort to meet with the art and engage with it.

I think the question of context in art is particularly interesting within the setting of a religious institution. Before museums and galleries began to be commonly established, religious institutions were one of the few places art could be enjoyed. I found the marriage between Baroque art and contemporary conceptual art to be odd at first, but it worked seamlessly. Artist Regan O’Callaghan argued that like religious art, contemporary conceptual art is meant to enable contemplation. McDowell talked to us about the ways in which the cathedral is working with artists and bringing them in to make St Paul’s a space for multi-faith contemplation and reminded us of the poetic legacy of the institution. She told us that John Donne was the cathedral’s Dean in the seventeenth century, and that he would be glad that young poets were engaging with the space.

Being non-religious, I was intrigued by the prospect of engaging with a religious institution as part of a poetry workshop. Usually, my interactions with places of worship are somewhat guarded. I don’t quite know how to act, or I feel like an observer looking in. Despite the cathedral’s loaded iconography, however, I found that I was able to connect with the space in a secular way.  I have never felt at home in a church, but spending the day there, talking to artists, and attempting to write poetry made me connect with the building. And frankly, it surprised me.

Editor’s note: this piece was initially published on 16 October 2017, with the author as Part B Editor. To reflect that the piece was written by Athina Khalid, it has been republished under her name.