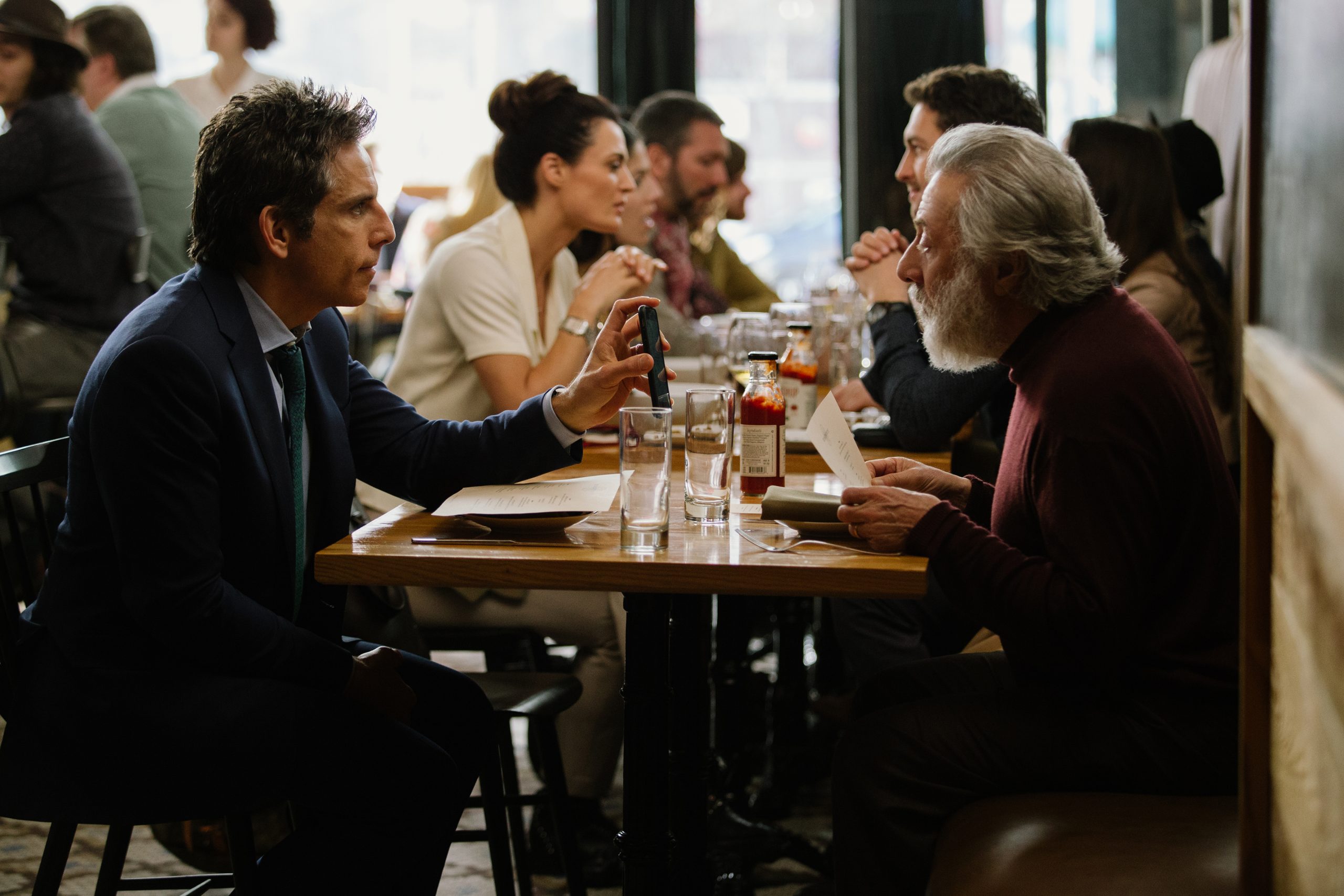 They say friends are like family, except you get to choose. It’s pretty obvious Meyerowitzes Harold and Danny and Matthew and Jean wouldn’t ever select each other’s company, had biology and the lottery of birth not thrown them together unmajestically. Harold’s first three acrimonious marriages (he insists only two – one was annulled) only complicated the situation further. This is the premise of Noah Baumbach’s remarkable family comedy-drama, starring Dustin Hoffman as patriarch Harold, Ben Stiller as favourite-son Matthew, Elizabeth Marvel as only-forgotten-daughter Jean, and Adam Sandler in a surprise, perhaps career-best performance as the inept, soon-to-be divorced Danny.

The movie opens with Danny driving with his daughter to his Harold’s house. Here we meet Jean and Harold’s idiosyncratic alcoholic wife Maureen (Thompson). In these early, light stages Baumbach’s screenplay threatens to slip into a post-Woody Allen people-arguing-over-dinner movie, but in truth The Meyerowitz Stories grows into a memorable portrait of a dysfunctional, disjointed family that holds together not despite but because they can’t seem to stand each other.

Sandler parodies the outspoken arrogance for which his characters have become so loved and hated in recent years. Liberated by a formidable script and the depth of the outstanding performances that surround him, he reaches new heights. Most notable of these others is Grace Van Patten, a sure-fire rising star who appears to carry all that Emma Watson strives for in, say, The Perks of Being A Wallflower. Charming and high-spirited, her Eliza encapsulates an enthusiasm for life flagging within more senior Meyerowitzes.

But the centre of the film is Dustin Hoffman’s likeable and lamentable Harold, a New York sculptor of debatable talent, at the end of his professional years but hardly free of regrets. He is surrounded by a collection of family members eccentric and restless. And all of which the way they are, for better or worse, because of him. There is nuanced and tempered character development for all but one of them: the others later regret they remain “just the same”, having missed the emotional journey they (and we) have undergone.

Such a complex portrayal of the dysfunctional family is rare, perhaps last seen in Michael Arndt’s sublime Little Miss Sunshine. A sense of truth is perhaps an underrated feature in cinema –aren’t we supposed to be blown away by fantasy? – but Baumbach again produces another deeply personal, affecting comedy that brings out the nod of embarrassed identification as much as the laugh, and plenty of both. Avant-garde direction and editing give this a slick Master Of None feel (New York, I’m sure, helps). And a masterful score from Randy Newman heightens the film’s reflective tone, on which it begins and ends so gracefully. The Meyerowitzes will be all right, Baumbach seems to conclude, but they’ll never find it easy.

PrevPreviousA Labour of Love
NextThe stroke of a genius: “Loving Vincent”, the first ever hand-painted filmNext
On Key