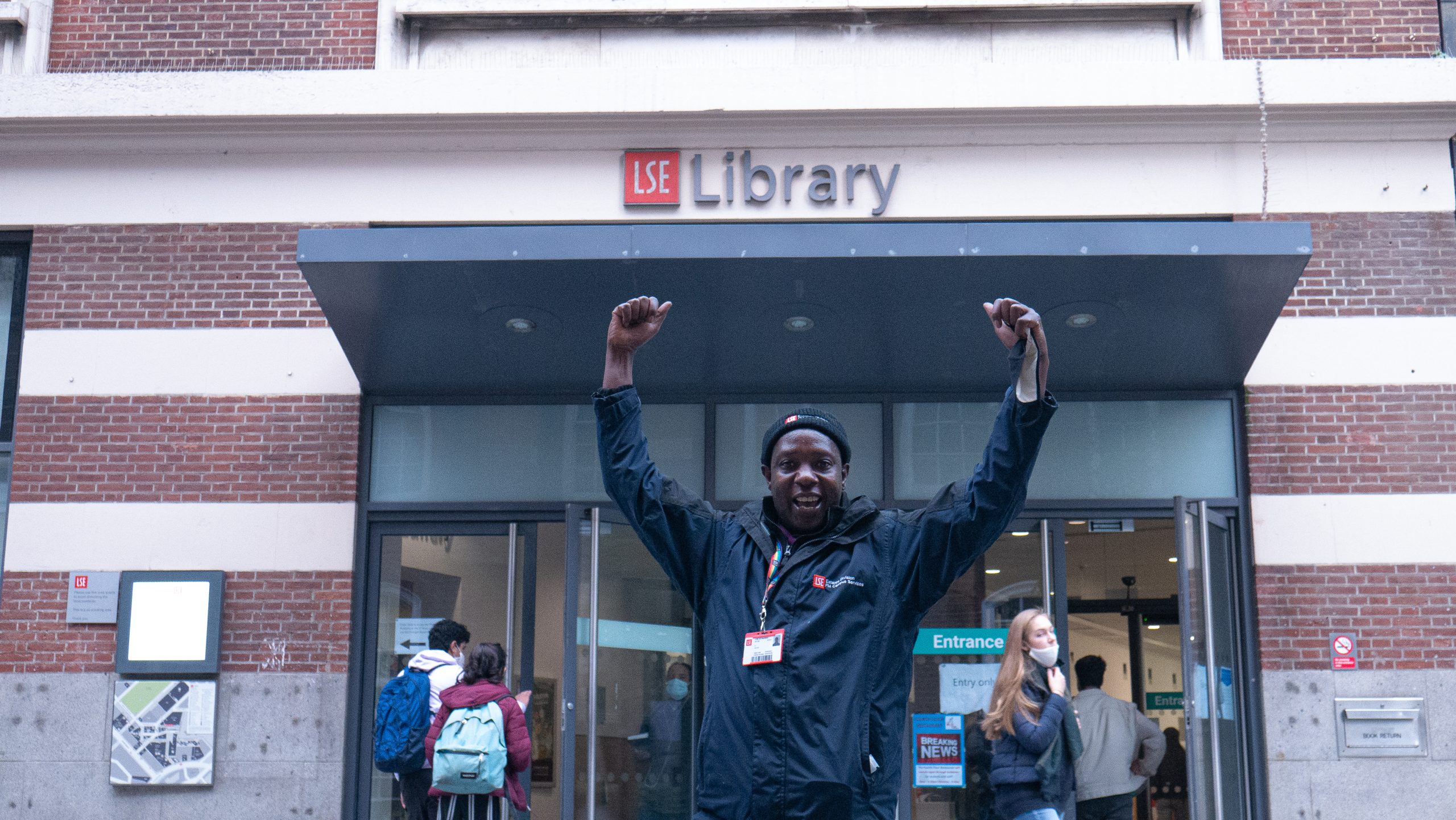 Historically, Flipside covers have been ways to highlight the brilliance of the LSE student community. For the first time, we’re not covering a student. Instead, we’re featuring a member of staff: Daniel, the Library’s exuberant, endlessly intriguing cleaner.

Daniel is a fifty-year-old gay man from Kenya. He’s a cleaner at LSE, where he’s worked since 2009. In that time, Daniel has seen the Library transform from a place purely for storing books—“with no student desks or electric hand dryers. We just had Victorian-style towels,” — to the buzzing epicenter of campus it is today. Now, in the midst of a pandemic which makes his role more important than ever, the space he looks after has become an empty shell.

This is not Daniel’s first time in the paper. He was at the forefront of the Justice for Daniel campaign in 2017 and is the animating force of the ongoing Justice for Cleaners campaign. The successful insourcing fight waged by the cleaners in 2016 and 2017 wasn’t just a historic moment at LSE; it set a precedent for low-paid, insecure workers to demand better treatment. It was the first successful insourcing campaign in the country. In the years since, the work of the LSE cleaners has inspired other insourcing campaigns, improving conditions for workers in the larger British community as part of an ongoing struggle. There are places to read up on Daniel’s work, but with this interview, I wanted to gain a better understanding of the man himself.

Daniel’s path to the forefront of major social campaigns at LSE is fascinating. He was born in a small village in Kenya, to  family who were not in the financial position to send him to secondary school. He stopped studying at 14 and left home at 18 to move to the big city, “it was a very explosive and new life.”

After working in Nairobi for two years, where he improved his Swahili and English, Daniel moved again, this time returning to the countryside to work on a farm. He loved the job: it was something he was used to, and reminded him of home. Eventually, he had to leave that job too. The farm was in the middle of nowhere: “if you wanted to buy a bag of detergent to wash your clothes you have to start the journey at 6am and you don’t get there till midday. … So just picking up necessities was taking me one complete day.”

Though he left the farm, he never stopped farming. His Facebook is full of pictures of his houseplants and garden vegetables. It still reminds him of home. When he was in primary school, he won a spot on a farming course, and fell in love with what he could grow. It comes naturally to him, something nurtured in childhood when his family used to grow all of their food. Later, after he moved to London, he persuaded his partner to move to a house with a garden so that he could keep plants throughout the year. Now, as he eyes an early retirement, he’s looking for an allotment, and plans to travel the country planting trees.

Since primary school, Daniel has been fascinated by the idea of travelling. That fascination, compounded by the very real danger of being a gay man in Kenya during the nineties, pushed Daniel to search for a way to leave Kenya — he thought he might settle in the UK or the Netherlands. When the opportunity to move arose, Daniel took it.

“Sadly, I ended up in Spain.” Not his destination of choice. After 6 weeks, Daniel moved to London. “The cultural shock and the weather was not something I had experienced before. I was amazed because all the trees had no leaves. And I was saying ‘Oh, if my mother moved here, she would be very happy because all of this dry wood she could cut for fire’. Of course, here they didn’t need firewood!”

Immigrating then was easier than it is now; still, it took years of turmoil before Daniel felt like his life here was secure. He went from seeking political asylum to being told that he was the first Kenyan to receive a two-year student visa. Daniel studied to become a care worker, working odd jobs on the side to help provide for his family back home, and managed to pay for all of his younger siblings’ secondary education. Daniel started “expressing [himself] in gay bars” in SoHo and met someone “and he was very kind to me.” The man sponsored Daniel’s education, and after living together for eight years, Daniel became a British citizen in 2001. Reflecting on this process, Daniel is grateful for the love he shared with his partner: “If someone was not in love with me, [I] could have easily given up.”

Daniel’s first long-term partner in the UK was — and still is — married with two kids. “His family all knew about our relationship, it was nothing we were hiding,” Daniel told me, “we lived in London and his wife in the countryside, although I regularly visited the countryside most weekends.” His partner’s children loved him — they taught him how to swim, something he never learned how to do when he was growing up in Kenya. “It was a beautiful life, although I wanted to live differently and decided to get a civil partnership [to someone else] in 2009.”

That civil partnership has since ended, and now Daniel is engaged to another man from Kenya. He hopes that they will be able to get married next summer. As for his first love in the UK, they’re still close friends, “going on 25 years now”, and Daniel maintains a relationship with the rest of the family. “[During] the first lockdown, I went there for the weekend and they took me for a lunch in the country pub — [it was] lovely.’’

Daniel’s first brush with campus fame came in 2017, as a result of his tribunal case against eight of his colleagues. For legal reasons, we must be clear that the story reported here is Daniel’s personal recollection, and the Beaver makes no claim to be presenting objective facts. While eating lunch one day in 2016, Daniel said he heard one of his colleagues say that “all gay people should be murdered, burnt alive, and hanged.” According to Daniel, that day marked the beginning of an onslaught of homophobic abuse against him. The lunchtime vitriol continued and escalated. One of Daniel’s colleagues used to wait for him to finish his shift in the Library and follow him to the Old Building, claiming she could “fix me, heal me, if I slept with her.” Daniel said that another female colleague engaged in similar harassment and, even though the case was eventually taken to tribunal, none of the eight colleagues who participated in the homophobic bullying directed at him were dismissed for their actions. Instead, after one of them filed a case against Daniel, accusing him of lying during the tribunal, Daniel was suspended with pay from work at LSE. His suspension, with appeal, stretched for a storybook timespan: a year and two weeks. This delay was ostensibly to safeguard Daniel’s mental health, though he said being barred from work only added to his mental strain. “They treated me like a predator, not like a victim.”

LSE’s treatment of Daniel is one of the most appalling things I have heard of, made worse by the fact that, two years on, the situation hasn’t changed. Daniel now signs in to work separately from his colleagues. His domain is – as it always has been – the LSE Library. He doesn’t venture out, not that his work schedule would allow for that anyway.

Speaking to Daniel has been one of the best things to happen to me this year. He inspired me with his love for life, and food, and gardens, and his love for love. His life is incredible, and I am glad I was able to spend the time to hear about it.

When we finished our interview, Daniel looked me dead in the eyes and told me how he knew his life was fascinating and that I’d better write a book and make a movie about him. I asked who he’d like to play him in the film adaptation and he looked at me like I had a horn sprouting from my head. “Me of course!” Silly me. As if anyone else could capture the golden of Daniel the Cleaner.

If you’d like to read more about Justice for Daniel or Justice for Cleaners, check out some reporting on the issues:

The Beaver – “Students Demonstrate at LSE for “Justice for Daniel”