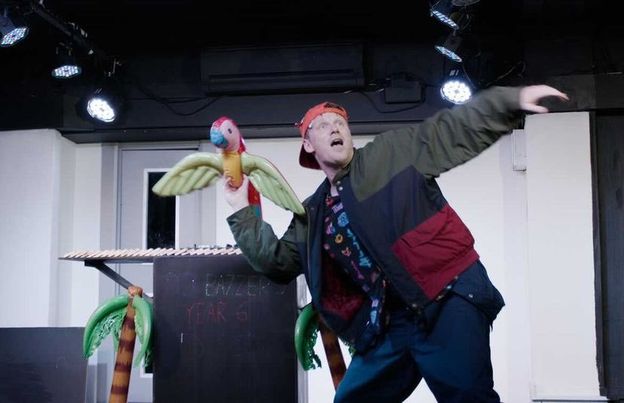 DJ Bazzer’s Year 6 Disco is an exciting experience that subverts one’s expectations until the final curtain. Appropriately stripped back, yet grandiose in scale, this is a show that deserves a longer run and brighter spotlight.

The play serves as an autobiographical insight into the life of a struggling DJ, whose career and personal life have flatlined after a series of unfortunate events. Bazzer is a man who dreams of disc jockey stardom, but still performs at the seasonal discos of his old primary school, at which he is employed as caretaker. One can’t shake the feeling that he represents the part of all of us that recognises the great expectations and aspirations of our youth, whilst worrying that we will never fulfil them. This is just one of the strong themes underpinning the piece, which are well teased out by the witty writing of Georgie Bailey, and brought to life through an emphatic performance by Jack Sunderland.

The audience are guided through a series of non-chronological, episodic scenes, which effectively represent the fractured nature of Barry’s life and mind. We are drip fed information of Barry’s desires, past and present, and the actions he has taken in their pursuit. The layers of his complex psyche are carefully peeled back in Bailey’s script, and Sunderland’s performance provides a deft hand in the unravelling of this multifaceted character and story.

Great credit must be bestowed upon the sound and lighting team, led by Chrissy Williams and Chloe Stally-Gibson respectively. Their work accompanies Sunderland’s performance in a way that can only be described as transportive. The audience are initially immersed in a seemingly terrific DJ scene, complete with fantastical disco lighting and blaring tunes. This mirage is shattered by an effortless sound and lighting transition to reveal the less glamorous reality of a crappy school hall aesthetic, highlighting the true nature of Barry’s life and career progression. The low-budget feel of these scenes (and much of the production) actually plays to the strength of the narrative and tone of the play, as Barry’s life is not a glamorous one, despite his DJ stardom fantasies.

The audience’s expectations are subverted like this throughout the play, wiping from moments of fantasy to harsh reality, elation and grandeur to bitter emptiness and melancholy. Bailey’s script and Sunderland’s performance are not afraid to pivot on a dime to unveil something most unexpected. An allusion to Jekyll and Hyde feels apt, with all facets of the production tending toward a duality in tone and execution, from opposing hues of lighting splitting the stage in half to the content of Sunderland’s performance itself.

And what a performance it is. Sunderland is bursting with energy and charisma that is perfect for this character and production. He is appropriately larger than life, or completely down to earth whenever the piece demands it. The structure of Bailey’s script allows Sunderland to flex his acting chops, instantaneously and convincingly transitioning between vastly different states of emotion and tension. I hope that DJ Bazzer’s Year 6 Disco marks the beginning of Sunderland as a familiar face in the realm of stage and screen.

You should go and see DJ Bazzer’s Year 6 Disco if you can, to see what can be achieved with great writing, acting, and crafty use of a limited budget. Perhaps the only negative is that you will be left wanting more.

PrevPrevious7 Books to read this Halloween
NextReading Week: An Alternative CurriculumNext
On Key