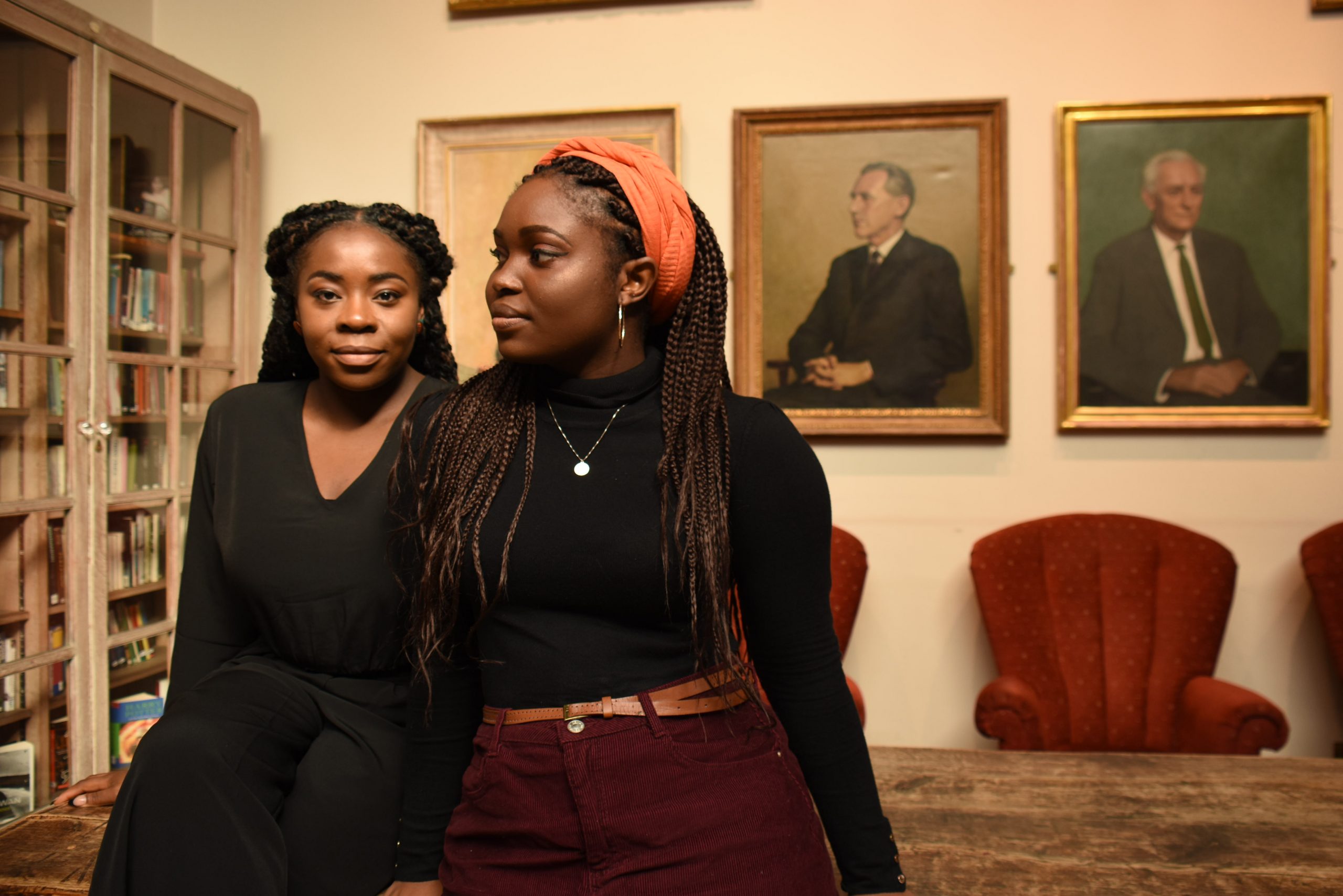 Let’s start with Martha–what do you do as education officer?

MO: My job is to represent all of the academic interests of the students and I sit on 22/30 of the committees and the committees affect students. I’m trustee of the SU. As part of that I’m responsible for the financial and legal health of the organisation. This year I’ve got lots of things planned. I’ve sorted out the BHM programme for this year and I’m in charge of what happens to the undergraduate common room in the NatWest building. I’m about to get a group of students together to decide how to design that and I’m super excited because that means we get another space on campus for students that’s designed by students. I’m also working on getting lecture capture standardised cross all departments and trying to revamp the course rep system to make sure course reps actually have a say in the departments. One major project is that I’m working with the pro director of education Dilly Fung, who was just appointed on the change makers project. This is going to be a set of student fellowships paid part-time for students to research different themes and issues on campus.

Wow! This seems like a lot of work; why would you run for this?

MO: One thing I hate doing is complaining. If I’m going to complain, I want to have the guts to do something and to change something. One of my favourite authors is Chinua Achebe, who wrote Things Fall Apart and There Was a Country. He said that until lions learn to tell their own histories, the story of the hunt will always be told by the hunter. Based on that, I took the initiative to think that if I want to change the narrative, if I want to make a change, I have to go out and do something about it. So, inspired by Achebe, I decided to run for education officer.

Any books you recommend reading besides Chinua Achebe?

MO: I recommend a lot of reads. I think everyone should try and engage with things like Slay In Your Lane: The Black Girl Bible written by Yomi Adegoke and Elizabeth Uviebinene, two professional women that are Black. One thing I want people to move away from is thinking that something is not marketed for you in terms of ‘oh this is a book written by two Black women what does that have to do with me’ and I think we should all endeavour to read things by others that aren’t like us because it allows us to broaden our horizons and understand more about other people. Another thing I learnt from books is that you have to make a change. You have to put your money where your mouth is and do things that have meaning instead of things that just bring you pleasure. All the great things that have happened in the world have happened because somebody put meaning above happiness. Malcolm X was one of my greatest heroes—I’ve read his autobiography like 500 times. He is a person who put living life with meaning over pleasure. As a result, we now have the history that we have of the civil rights struggle in America. He also impacted Black radicalism at the LSE as well. He came to speak in 1965, so yeah. Those are the 2 books that I recommend.

EG: One that was published this year that was called The Good Immigrant by Nikesh Shukla and other artists. As a spoken word artist myself, I was taken aback by the book. It was just a wide range of stories from a wide range of artists and you would sort of put them in a box like ‘oh they only do spoken word why are they going to write a non-fiction essay’ sort of thing. It was a great read because they not only talked about their identity, but they also made sure to tell us that their race, their colour, does not define them. So they talked about other things apart from race, like that they are comedians, they are mothers, they are food lovers, and not just food from their native countries and stuff which is really really good. I think that book really bridged the gap between poetry as sort of fleety, nice, way to talk about something, and nonfiction, which is really straight to the point, hard truths kind of thing. It had such a big impact on the British community.

You are a spoken word artist. What do you like to perform about?

EG: That’s a good question. I perform a lot of things. I usually write when I’m angry, but I perform about my experiences. I talk a lot about not just race, but how race relations within Black communities are played out, especially as a Black woman, but also as a British-Ghanian, as a member of the diaspora, the tensions with my African heritage and how that plays out. That’s what I’m mainly interested in. But I’ve also written odes and love poetry, which isn’t like the whole cliché ‘I love you’ thing but more deep feeling things about how I have crushes on someone but I only have a crush on them because they have power or they are intellectual and I’m only attracted to their intellectual side or how they’re not a stereotypical sort of Black male from south London thing.

How are you feeling about the fact that this is the first BHM issue in a few years?

EG: First of all, let’s just celebrate that we have this edition before we start criticising why we haven’t. I think it’s great that Martha spearheaded this initiative and the SU have actually listened because we definitely need it. But I also don’t understand why we haven’t had it before because there’s clearly a wealth of incredible Black writers who write on myriad of topics who need to have their voices heard because they’re part of the student body and therefore should be featured in the news. I’m just hoping that moving forward, we can get more Black writers in the Beaver staff as contributing writers and editors, and that would be a long-lasting change within the Beaver.

MO: I agree with that, and I want to make it super clear that the BHM edition is not to limit Black student writers or any writers to just Black issues. It’s to say that this our month, we exist, here we are. This is a way to showcase what we have. Through this, we hope more Black writers will join the staff and contribute. I hope that this will be a lasting legacy so next year, it won’t take a Black sabbatical officer to say we should have it. It will take someone in the staff team to say ‘it’s Black history month, what are we going to do. Let’s get some Black students together and do something amazing.’ It’s about recognising that Blackness is part of the world, part of our community, and we should appreciate it and recognise it.

To finish up: What is your favourite article in this issue that everyone should read this?

MO: Oh my god! Ok, Sean Chou has written a comparison of Moonlight the movie and Franz Fannon. I was absolutely shocked! When I saw the text, I was like, ‘he can’t do this, this doesn’t make any sense!’ But as I read it, there were so many commonalities and similarities, thematic issues that cut across both the text and the movie, and I was like, wow! I also think it’s a great example of a non-Black person writing about Black culture in such a respectful and objective way, in a way that actually celebrates, and that’s what this edition is. It’s to celebrate what Black people contribute to the world, and it’s amazing.

EG: We’re in an academic institution, and it’s a very academic article that everyone can read and everyone can relate to and can help everyone in their discussions around not just race but how we can incorporate Black history into mainstream history. Because everyone’s seen Moonlight and everyone’s held it as ‘that incredible Black movie’ but it’s a movie made from Hollywood so why does it have to have that subtext of ‘a Black movie’. And the way he’s written it, especially as someone who’s not a Black person, shows that we can move forward with these discussions, we don’t have to shy away like ‘because I’m not Black, I can’t talk about race’. Like we need to talk race, but we need to talk about it in a very respectful and educated manner which is what he’s shown in his article.

MO: Another article that I really liked was Temi’s. So she’s born in America but from a Nigerian background and studied in the UK for the past 4 years. Her article shows how nuanced the Black experience is across the globe. She talks about how she perceives Africans and Caribbeans in England to be more in touch with their culture versus what she’s experienced as an American versus what Black people think of themselves in Lagos and it’s so cool to read that experience and hopefully those who do read it will understand that Black people aren’t linear. We are so different and the differences within our community is what makes us awesome. It’s also why it’s super important not to assume things not just about Black but people in general.

E: My favourite section has to be Part B. We’ve got one incredible artistic review written by Chinyere Ifemi. It’s about Black artists that you need to go and see who not only have a feature during BHM but have a permanent display. It’s so easy to complain that Black people aren’t in these places but she’s actually gone and done the research and been like, ‘actually, they are in these places and they are doing these incredible things so you have to go and see and stop complaining’. And the music review, it was written by a prospective student and he reviews Room 25 and another album and talks about the roots of hip hop which is so prevalent in the Black British culture but where it comes from in terms of Jamaica and how it helps to form that Black common identity which is really good.