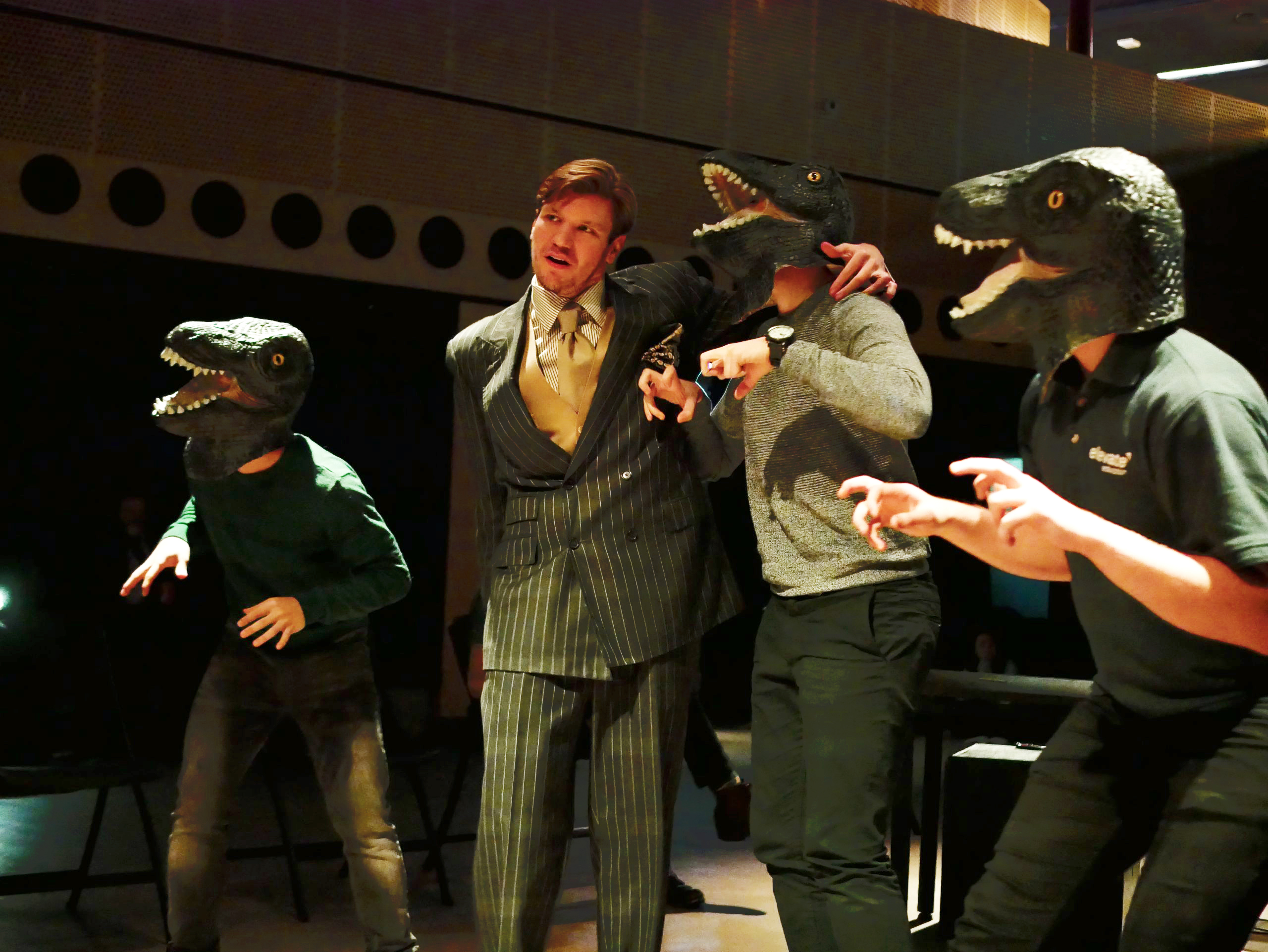 Dinosaurs, scandal and the stock market: what more could you want? The LSE Drama Society opens the year in style. An energy company as the subject matter shouldn’t scare anyone off. It’s deeply, darkly funny and most importantly, accessible.

The Enron scandal shook America, resulting in repercussions for the future of white-collar crime. This play is a mostly-true retelling of the scandal about the energy company Enron. Jamie Boucher, one of the co-directors clarifies a few deviations from the true story, “the real Enron, for example, did not employ literal dinosaurs.”

The scandal resulted in over 20,000 people losing their jobs, savings – everything. Boucher elaborates: “Lucy Prebble – the author – wrote it in the aftermath of the financial crisis, and it does really ring true for that sort of thing. Especially if you study at LSE, corporate malfeasances and errors of the market – market failures we call them – have real effects and real people get thoroughly fucked over.” The reality is remarkable and deeply shocking – I won’t give too much away. You need to see it to believe it.

The story progresses with the character development of Jeff Skilling (Percy Fagent). Boucher credits the author Lucy Prebble with toeing the line “it’s super easy to take a character like Skilling with the headline ‘cost 20,000 people their jobs’ and make him unredeemable” but Fagent delivers a wonderfully human performance of the charismatic narcissist.

The play is in traverse – for non-theatre nerds, think fashion runways – a worthwhile risk from co-directors Caitlin Gilhespie and Jamie Boucher. The tone of the play is supported by a stage that demands split attention. You don’t always get a perfect view of every line all the time, but it doesn’t take away from the show – if anything it adds to it. Because it’s in traverse, the division of the stage often necessitates the cast to perform with their back to the audience. This breaks the first rule of conventional performance, but the duplicity means if you aren’t getting a clear view you’ll get any number of reactions in the meantime until they turn around. The staging, lights, music, and use of projection all aid to make this a snappy, witty, and exhilarating viewing experience.

Pearl Salamon-White shines bright as Claudia Roe and delivers Boucher’s favourite line in the play “Windfarms? I’m sorry I thought I was the only woman in the room.” Roe is clever, cutthroat and charming, her only fault being that of her sex. She is a refreshing female presence in Enron making the boy club dynamic all the more obvious.

Pavan Rao and Delmar Terblanche play Ken Lay and Andy Fastow the two other men involved with the scandal. Their contrasting characters add flavour to scenes that could otherwise be lacking.

There are only four credited roles as the play rests on the backs of its multi-roled ensemble. The entire cast match talent with spatial awareness, transforming this play about a company, the economy, and stocks (how very LSE), to having you permanently perched on the edge of your seat.

Tickets are available for the Monday 18th, Tuesday 19th and Thursday 21st November shows of LSE SU Drama Society’s Enron. Tickets can be purchased at £3 for Drama Society members, £5 for students, and £8 for members of the general public.