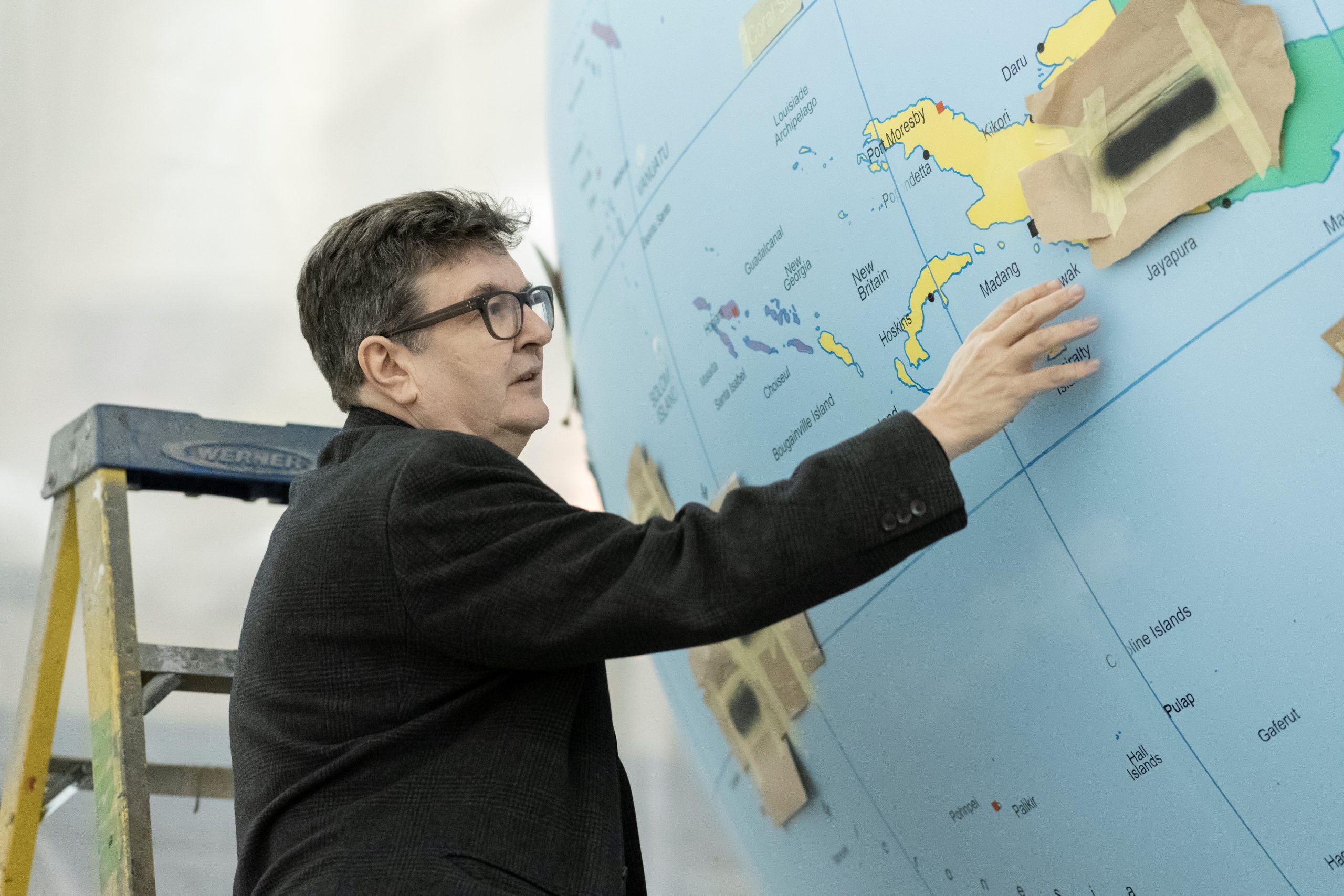 Image courtesy of Mark Wallinger and Hauser and Wirth

In 2005, LSE’s resident penguin and elephant Tembo made their home on campus from Canada, donated by General Course alumnus Louis Odette. In March 2009, the penguin, barring its flippers, disappeared from campus. Despite a tin of sardines left to lure it back, it was finally replaced in October 2009.

Ten years later, Mark Wallinger (right), the Turner Prize-winning artist, will unveil the third permanent sculpture at LSE. He spoke to The Beaver about the 4-metre diameter, upended, UN-delineated map, on which Africa and the oceans are to scale.

“We’re so used to reading to reading the map in an oblong Mercator projection … It’s the world as it is in terms of nation states as ratified by the UN as of the day it’s unveiled. This is a fairly simple gesture in a way but it does a lot of work.

“The shapes have become familiar to us down the years and this refreshes us…even on a perfect sphere… I’m hoping that it’s a beautiful thing that sucks you in and you get absorbed in the detail of it.”

When asked whether the UN map had been altered at all, he said: “No, it’s scrupulously to the UN map as it stands now and working through a company called Global Mapping. There a lot of contested regions in the world, that’s just a fact.”

The inversion is key. “People seem to be more and more rigidly adhering to their positions and there’s no great dialogue going on anywhere.” On the marketisation of the education sector, he says it has “become very narrow and instrumental”. Of the commercialised art world and diminishing funding of artists he thinks “we’re missing some of the dangerous and innovative things”.

The name ‘The World Turned Upside Down’ is literal, but it is also inspired by an English Revolution ballad, an early protest “against enclosure and the privatisation of the land.” Now, he says, it’s neoliberalism and Big Tech making it difficult to buy things we “feel should be ours by right”.

Is our arrogance preventing us from viewing the world as a whole, rather than segments to own? “The vestiges of empires and colonialism are still all there. This is going to be a permanent work, so as the years go by, it would be interesting to know what shifts in the world and how far its skewed from the particular version.”

The project took five years and Wallinger was selected out of “5 or 6 people”. An LSE spokesperson declined to specify the exact cost of the sculpture, but confirmed that the majority of funding came from donations.