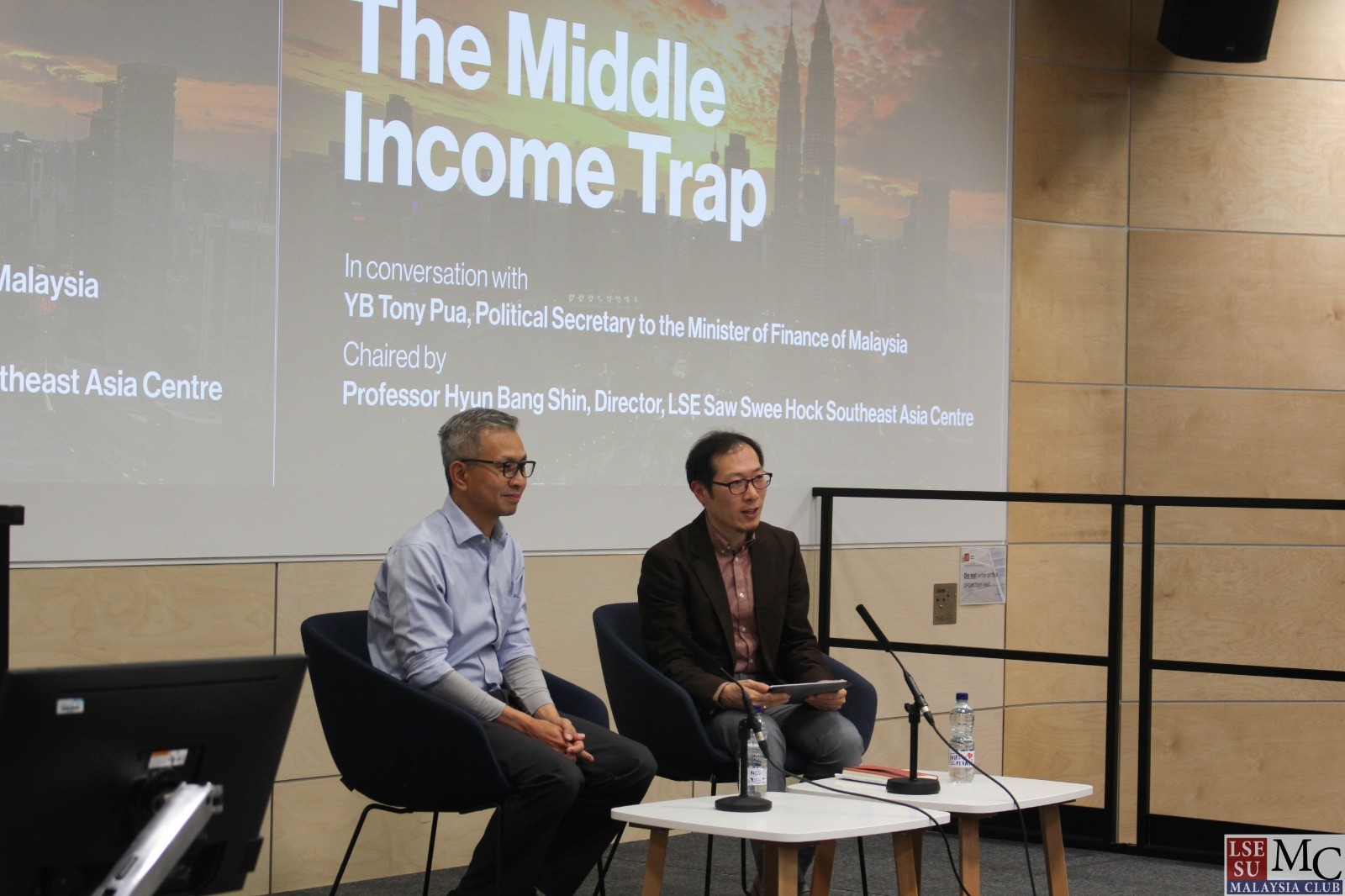 The LSESU Malaysia Club invited YB Tony Pua, Political Secretary to the Minister of Finance of Malaysia and Member of Parliament for Damansara, to LSE on 15 November to talk about ‘The Middle Income Trap’ and have a Q&A session. Features Editor Marianne Hii sat down with him to discuss the improvements and challenges behind installing a new government. The interview has been edited for clarity and length.

Beaver: So, now that Malaysia has 62 years of independence, we have been making some major developments. What is your opinion on the role of education in shaping the Malaysian economy?

Pua: I think the number one solution towards higher income, better economy, better quality of life for all, better equality, has to be education. Better quality education, more holistic education. But that change takes time. That change involves not only good policies, but also very strong political will, and hence that will be a strategy that is longer-term in nature.

Beaver: How will the current debates over streaming [secondary students] into arts or sciences [subjects] or not streaming at all play into Malaysia’s future education?

Pua: I think the policy is still developing. There is recent news that the Ministry of Education is considering not streaming. I don’t have the details of that, but if by not streaming, it means that students get exposed to both arts and sciences, in different proportions, according to the student’s preferences, then that will be fantastic. If not streaming means everyone studying the exact same thing, then that will be an issue, because everyone has different strengths and weaknesses. Everyone has preferences on their preferred course of study. Someone who is more science-oriented would like to have more science as part of a course, and vice versa. The devil is the details- we are awaiting further details from the Ministry of Education.

Beaver: How will the question over the language of education be handled, amidst concerns of the negative impact of constant switching [policies] on students?

Pua: There’s no question that the constant switching doesn’t help the education system. That’s number one. But at the same time, the debate over the language to be used to teach students needs to be one that takes into consideration real practical problems faced during implementation. In the ideal world, we would have maths and sciences taught in English, and our students would be picking them up in English, and be able to compete and match the best in the world. That’s the ideal world. In the non-ideal world that we live in and the reality that we face (and this is completely separate from political issues, which are not part of the consideration for me), is the fact that we don’t have teachers who are sufficiently competent to teach in English.

We don’t have student backgrounds that can give [students] good support at home when they are taught in English. And hence, if you were to impose a strict compulsory English teaching, teaching maths and science in English, or any other subjects in English, then it would actually create a double whammy for students, particularly in the rural areas. So, urban students with parents who are professionals will not have a problem ensuring that their kids are able to cope with the subjects being taught in English, even if the teachers aren’t quite competent in the subject, but that’s not going to happen in the rural setting. And hence, it is important to differentiate [between], or formulate [which] policies that, while, on the surface, seek to improve standards, but in reality will only impede the ability of the students to pick up the actual subject matter- maths and sciences.

Beaver: How are Malaysia’s politics and economy intertwined?

Pua: The elaboration will take at least an hour, but the short answer is that politics and economics will perhaps always be intertwined, in any part of the world, but particularly so in Malaysia. Partly because Malaysia for the past 60 years has been – I think the word is – “brainwashed” to think along racial lines, which was the formula used to sustain the previous government in power. Now that we have managed to defeat the previous government, the thinking remains the same. It’s all about how much is it for Malays as opposed to how much are other races gaining, when the argument should be how much is it for the bottom income earners versus how much the top income earners are getting, regardless of race. And hence, policy choices that the government imposes must take into account the perceived divisions, perceived stereotypes, perceived racial mindsets, or you might have the best policy for any economy but fail in implementing it, because you failed to take into account how these policies will be perceived on the ground as being biased to any particular race.

Beaver: I think Anwar Ibrahim [slated next leader of Pakatan Harapan, the current governing party] would originally have like to remove the race- based affirmative action policies in theory, but in reality, that’s very difficult in Malaysia.

Pua: I think it’s something that needs to be done overtime, as we get Malaysians, particularly those in the middle and lower income status, to feel more confident about themselves, and ensuring that our policy, bit by bit, demonstrates our ability to take care of the poor- particularly the poor bumiputras (Malaysian term for Malays and indigenous peoples of Malaysia) to give them confidence that the policies of the government are not intended to divide between races, or increase disparity between the races, but actually to reduce them and not make them meaningful. So I think it has to be a slow process. The mindset of the people doesn’t change overnight just because there has been a change of government, and any policy we do has to not worsen the existing situation but improve it marginally over time.

Beaver: Are there any policies that the government is taking to reduce rent-seeking patronage?

Pua: I think that the simplest policies we started are to ensure that all contracts are tended competitively. [Open contracts], that’s the simplest, and even when there are certain types of contracts that are restricted to bumiputras, for example, as it was in the previous government. What we do now is even if it’s restricted to bumiputras, then it is tended competitively between bumiputra companies, as opposed to in the past: they say it is for bumiputras only; they will allocate it to a particular bumiputra company. There are plans to table a Government Procurement Act, and that Act will cover a lot of reforms on how the government will carry out procurement in the future, so this is actually currently in the making. And we will table it, I believe sometime next year.

Beaver: So you believe that the Pakatan Harapan Government is making solid progress towards a more transparent economy?

Pua: in terms of progress – increased transparency, good governance – absolutely. In terms of delivering actual tangible results on the ground where the people can feel it, it’s still pretty much a work in progress, because changes in government do not immediately translate into better quality of life for the people out there. It is a change that will take time. It is a change that will be appreciated by domestic and foreign investors, and for them to react to this change, it will take time for them to shift and change their investment decisions based on their confidence in Malaysia and in turn, overtime, medium-term, will have an impact on the economy. So it is something that we need to be slightly patient about. Voters’ expectations are very high, but the economy isn’t going to flip upside down just because there was a change of government less than two years ago. But with all the right foundations put in place, we believe that all this effort in governance and transparency will translate itself to better economic returns, clearly, over the medium-term.

Beaver: I know a lot of Malaysians here, especially at LSE, would like to continue seeing such changes, but it all depends on the next government.

Pua: And that’s the reason why we are institutionalising many of these changes via laws. The Government Procurement Act is meant to do exactly that, so that for them to change the law, in which they do a procurement, for example, go back to direct negotiations, will take a lot of effort. They cannot give direct negotiations without breaking the law unless they make a separate effort to change the law, which will then make them look very bad.

Beaver: Do you have any advice for young Malaysians hoping to enter politics and continue contributing to such changes?

Pua: I think young Malaysians who are interested in politics are extremely welcome. The opening answer or statement I would like to make is really the fact that the problems that you see today in the country’s administrations: you will scold the ministers for being dumb, you will curse the ministers for being daft, you will cover your face in shame by some of the idiotic statements that our country’s leaders seem to be making, but the reason for that is that there is not enough talent in politics. When the smartest people in the country shun politics, then the worst of the lot become your leaders. So the only way to solve the problem, is that more smart people, more clever people, more intelligent, young Malaysians decide to join politics at some point in time.

That’s the only way you can get better quality leaders in the country, so that’s number one. But point number two that I would like to make is that a lot of young idealistic Malaysians often like to join politics immediately, because you want to do it now- that’s your desire, that’s your goal- but what happens it that when you join immediately after school (that means college), what will happen is that you lack real world experience out there. You have not seen the people out there, you have not seen how corporations work, you have not seen how people react to policies, that only creates smart people making policies in a vacuum. So it is always useful to have some real world experience, whether it’s two years or ten years or more. It is better than having no experience out there; it is very important to learn to manage, to see how policies work or don’t work, before joining the governing sector or the politics, so that you are better able to contribute if you are elected or become part of the decision making committee.

And I think that lastly, we definitely look forward to more Malaysians, young Malaysians, bright young Malaysians coming back home and changing things for the better. The current generation has done only step one, and that took a while, only step one, that is, to change the BN government, the corrupt, kleptocratic BN government, but that doesn’t solve all our problems. We need more leaders who are even more determined to make Malaysia better, to take step two, step three, to change the mindset of Malaysians, to make Malaysia even more democratic, even more cohesive, even more united, and to put in place better economic policies to ensure that we can compete with the best of the world.