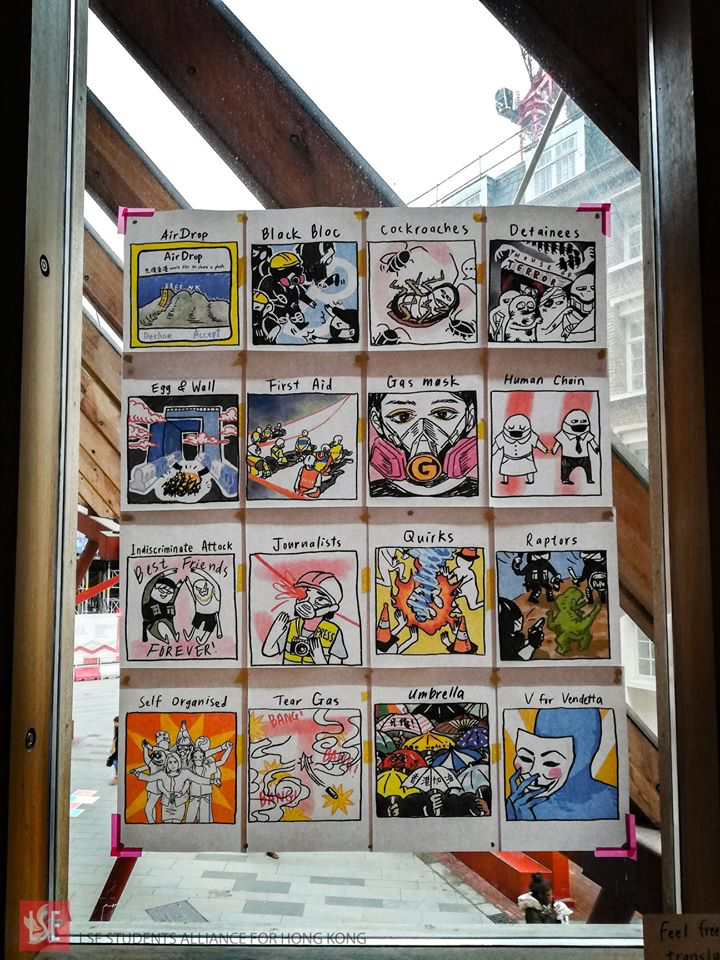 Six months of protests: violence, disruption and the media in Hong Kong

It has been nearly six months since the Hong Kong protests first began, and they show no signs of stopping. Today, the streets of Hong Kong are a battleground between pro-democracy protesters and the police forces sent to curb their efforts. Petrol bombs, tear gas, and scattered debris are increasingly common sights that capture the tense and violent clashes between the two sides.

The Hong Kong protests first began as a movement against the controversial extradition bill, which would have granted mainland China the ability to arrest political dissenters in Hong Kong, thereby threatening Hong Kong’s legal system and its safeguards. While the bill was formally withdrawn in September by Chief Executive Carrie Lam, the movement has continued on, morphing into a sustained call for greater democratic rights and a pushback against the growing influence of Beijing in Hong Kong.

Yet as protesters become more desperate in their efforts for a largely absent government to acknowledge their demands, tensions have risen, culminating in violent confrontations between the protesters and police force that continue to escalate to date. Most striking is the use of tear gas, water cannons, rubber bullets, bean bag rounds, and live ammunition by police officers, who have garnered criticism from local and international communities for their use of excessive force. Most recently, the US Senate passed a bill sanctioning officials who violate human rights in Hong Kong, as well as banning exports of items such as pepper spray, stun guns and tear gas. An investigation by Amnesty International in September concluded that the excessive force employed against protesters were in violation of international human rights laws, based on the testimonies of those arbitrarily arrested and abused while in custody. In October, the police force also drew outrage from many communities with the shooting of an 18-year-old in the chest at point blank range, as well as a 21 year old in the abdomen at close range just over a month later, who underwent surgery to remove his right kidney and part of his liver.

As arguments and tensions rise over the excessive force of police officers, protesters have begun to develop anti-police sentiments. Some teachers have been reported to encourage bullying against the children of the police, and doxxing is a common tactic used against police officers to encourage harassment and death threats against their families, with protesters taunting that “the whole families of dirty police deserve to die”.

Indeed, as the force employed by the police continues to escalate, it appears that the protesters’ actions have grown increasingly violent as well. In an interview with a student studying at UCL, Mark* stated that “When the government is armed, the protesters have the right to use any means to defend themselves from that tyranny”. Indeed, this appears to be a popular mentality justifying violence among protesters. In a survey conducted by the Chinese University of Hong Kong in October, 59.2% of 751 respondents believed that non-peaceful escalation from protesters is justified when the government ignores peaceful demonstrations, much like those earlier on in the movement.

Yet as time progresses, more Hong Kong citizens have become more intolerant of what they perceive to be disruptive and violent actions from protesters. In another interview with a student from Hong Kong, while Richard* condemns incidents of police brutality and force, particularly the use of live ammunition, “it is becoming increasingly hard for me to support a movement that I really do want to support”. Over the course of the protests, protesters have blocked roads and deliberately vandalised public property, such as public transport systems and what they perceive to be pro-China businesses, and Richard is no stranger to this: “[These actions] aren’t helping make Hong Kong a safer place… my dad’s business was firebombed along with twenty other unrelated businesses simply because a pro-China business used to be in the same building”. He finds this violence against people, regardless of their views, to be completely undemocratic.

There have also been other cases of violence from protesters against police officers and those with pro-China views that have ignited controversy. On October 13, a police officer was stabbed in the neck from behind in what was described by a police source as one of the worst attacks “in terms of malice, in terms of an attempt to kill the officer”. On November 11, in a disagreement over national identity, a pro-China man was doused in liquid and set on fire by a protester. And yet these actions do not appear to be covered in mainstream media as much: “From Hong Kong sources, at least, I find that news sources tend to report less on actions portraying Hong Kong protesters negatively,” Richard said.

So have the actions of the movement gone too far? While protesters understandably have the right to determine their future, the violent actions of radical protesters endanger the lives of other individuals, including citizens, yet the pro-democracy movement does not appear to address this. The labelling of violence by protesters as a form of ‘justified violence’ does not seem to be enough: for example, petrol bombs being thrown on highways immediately and indiscriminately threatens and disrupts lives, and one must question if it is valid to disregard the consequences of these actions on the physical health and personal lives of all Hong Kong citizens, in pursuit of a movement that some may not necessarily believe in. Is it right for a pro-democracy movement to disregard lives for the sake of the greater good of democracy in the long-run? In doing so, does it not go against the values of democracy? These are all questions raised by critics on the legitimacy of the protests, including those who previously supported the movement.

The South China Morning Post has also noted that residents writing to the organisation feel silenced by pro-democracy activists, which is perpetuated by the constant anti-China, anti-police, and anti-government slogans. While this suffocation of opinions contrary to the pro-democracy narrative may suggest mass support for the group of protesters that undertake more radical actions, it can also point to a silent majority within Hong Kong that condemns the protests without expressing their opinions publicly, as argued by Hong Kong authorities.

While there is no concrete evidence for this type of pluralistic ignorance, it is certain that there are people who believe that the pro-democracy narrative has shut down all discourse regarding the protests. Among the most notable is the resignation of the vice chairman of the Hong Kong Bar Association, Edwin Choy, who previously represented leaders of the 2014 pro-democracy Occupy Movement, due to the failure of the association to publicly condemn the radical actions of the protesters. In an opinion column submitted to the South China Morning Post, Choy stated that the previously peaceful demonstrations had transformed into destructive behaviour “far beyond the set boundaries laid down by the law”, with protesters “stirred into abandoning reason and replacing it with barbarism”.

Indeed, property damage is widespread, and, in some cases, conducted for no reason other than that figures within the organisations and entities targeted held opinions that differed to the views of protesters. Similarly, in an interview with Eric*, a Hong Kong student studying at Princeton University, he revealed that he felt more threatened by the protesters rather than the governments of Hong Kong and China. He also opened up about the lack of open and civilised discussion regarding the protests: “It’s frustrating how the protesters think they represent everyone or the vast majority, when in reality, there are just a lot of voices on the other side that are unheard or get shut down. They are literally suppressing freedom of speech while professing to protect it.”

Regardless of whether the actions of protesters are justified or not, the protests have undoubtedly created implications for the rule of law. Over the course of the protests, there have been incidents of excessive force and violence from police officers and protesters alike. One should not be so hasty to condemn either side, for these are generalisations of each respective mass. Some, much like Richard, believe that the increasingly violent tactics of protesters forces police officers into employing more force, while others maintain that the descent of the actions of radical protesters into violence stem from a sense of desperation and hopelessness. Yet if the violent actions of police officers are to be held to certain standards of justice, protesters must likewise be accountable to these same standards, and this is something the pro-democracy movement must recognise in its demands to the government; amnesty for all protesters is unrealistic and impossible without disrupting the notion that all are equal in the eye of the law. Mechanisms of accountability must be implemented for both sides; thus far, the disproportionate amount of reporting on the violence of radical protesters by the media has led to a one-sided narrative and unconditional international support for the pro-democracy movement. Meanwhile, the censorship of events in Hong Kong by mainland China has fuelled strong anti-Hong Kong sentiments, which has potential ramifications for future political relations between the two systems.