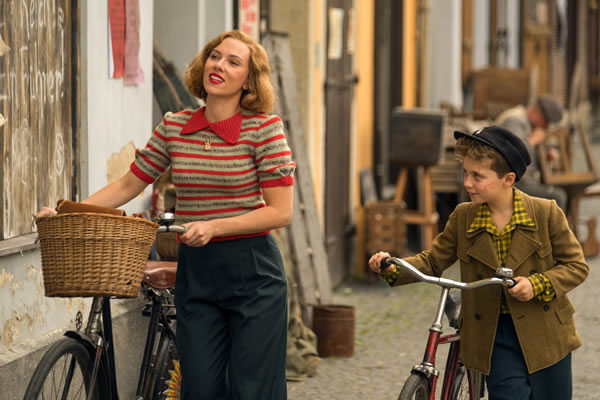 New Zealand actor and director Taika Waititi made headlines in early 2019 when he announced his sixth feature film. Jojo Rabbit is based on a ten-year-old Nazi fanatic’s relationship with both his imaginary friend Adolf Hitler (Waititi) and the Jewish girl his mother is hiding in their attic. Dubbed a “black comedy”, this star-studded picture promised to be both hilarious as well as a warning about our trying political times.

Do not be lured in by this premise. This film possesses all the sharp historical edges and the hard political corners of a bouncy castle.

For context, around 80 minutes through this film a kernel of popcorn got caught in my throat and my first response was not the normal fear, action, or confrontation with mortality. It was merely blessed relief at the chance I would be unexpectedly delivered from this offensive, bland rubbish. This was all Jojo Rabbit was: not preferable to an untimely accidental death at the hands of overpriced popcorn purchased at Vue York.

Alas, I did not perish on Aisle E — although I did detect palpable relief from those sitting around me at being spared a few seconds of Taika Waititi’s obnoxiously unfunny Hitler schtick during my coughing fit. Surviving my ordeal allowed me to witness the final twenty minutes of the film, which were better than the previous eighty combined. Nicely shot, emotionally raw, a well-executed glimpse at the ending of a war from the side of the loser. If anything, this irritated me more. It proved how, if they dispensed with the lame gags, inane slapstick, and undeveloped characters, Jojo Rabbit could make a stab at being a decent film. The perspective of an indoctrinated child on fascism had the potential to be a fresh interesting one.

The film’s nearly-goodness is in a sense worse than it being just plain bad. It’s like taking a mediocre black comedy and a mediocre war drama, jamming the worst parts of each together, and having the audacity to charge people to witness the outcome. This is the kind of insidious inadequacy that makes you resent even the good parts: they demonstrate it really didn’t need to be this way.

What point was Jojo Rabbit aiming to make? That Nazis are bad? That there are good guys on both sides? That murderous fascism is a perfect setting for lukewarm comedy? These premises are passé and poorly executed, or perhaps just plain ludicrous.

Sure, there are a few good things. Scarlett Johansson occasionally wears a dashing hat. The living room is painted a lovely shade of blue. But these small graces rapidly turn to dust, blown away on the wind of just quite how bad this film is. Taika Waititi manages, stunningly, to play a camp comedy version of Hitler living the head of a ten-year-old and only conjures one (one!) laugh during an entire feature-length film.

When it comes to the rest of the cast, things are neither here nor there. It’s hard to criticise lead Roman Griffin Davies for his ten-year-old Jojo. If anything, one has nothing but sympathy for a child being dragged into this 108-minute car crash. Thomasin McKenzie’s clear-eyed performance as the hidden Elsa is one of the film’s brighter points. To continue his apparent unbroken streak of playing racists, Sam Rockwell portrays Hitler Youth commander Captain Klenzendorf as adequately as the woeful script allows. Rebel Wilson also finds time to trot out her achingly unfunny one-note persona — this time with a ropey half-German accent. Huzzah! Scarlett Johansson is good but under-utilised: Waititi opts for excessive “comedic” heil Hitler-ing over developing the character of Jojo’s mother.

The only good things I’ve read in favour of Jojo Rabbit concern how “audacious” it is. Herein lies the central issue: Audacity for audacity’s sake is not worth it. It is not art. There needs to be more substance than merely a shocking premise, a load of big names and a final scene with lots of guns. Jojo Rabbit eschews making salient political points and emotional connections for a hollow and futile exercise in faux-audacity. And it’s a bloody painful watch.