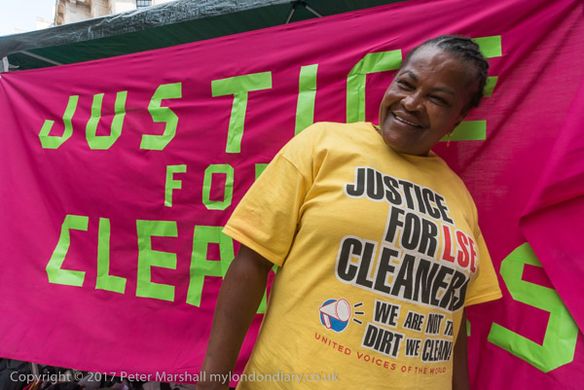 This Tuesday, November 13, the Justice for Cleaners group held its first open meeting of the term and set the next steps for the campaign. Among those who attended were many new faces of students who had not been previously involved, a very positive sign according to the group.

The larger campaign of Justice for Cleaners started in 2016, involving protests, occupations and breakfasts to establish connections between students, cleaners and the United Voices of the World (UVW) trade union. In 2016 the campaign was also responsible for reinstating an LSE cleaner who was dismissed with almost no advance notice.

The most inflamed moment of the campaign was the cleaners’ weeklong strike in March 2017 which demanded parity of conditions with LSE in-house workers. In June 2018, LSE decided to bring the cleaners from the outsourcing company Noonan in-house. This was an unprecedented move across the higher education sphere, and the success of the campaign at LSE has sparked a chain reaction.

The 2017-18 academic year also witnessed the Justice for Daniel Campaign, which demanded action against homophobic bullying suffered by Daniel, an LSE cleaner.

After providing a brief history of the campaign, especially for those who were participating in their first meeting, the facilitators went on to address the problems that Justice for Cleaners still plans to tackle.

Evelyn, a cleaner present at the meeting, voiced her concern that even after recently being brought in-house cleaners “are not really welcome at the LSE.”

The first concrete issue brought up was remaining issues regarding salaries afforded to cleaners. Justice for Cleaners, together with UVW, is set to investigate the reasons behind a difference in pay of almost £1 per hour between cleaners at the LSE and cleaners in SOAS, who are technically being evaluated using the same scale. The disparity in pay is one of the main fronts of this new phase of ‘Justice for Cleaners’ campaigning.

The group mentioned the persisting problem of heavy workloads, an issue brought up by many cleaners, and that according to ‘Justice for Cleaners’ demands structural changes to have people covering sick leaves and annual leave. UVW is unrecognised by the LSE, who only recognises one trade union: UNISON.

As a result, the facilitators of the meeting claim, there is a myriad of issues: the lack of a space for cleaners to eat, rest and change at LSE, and actions taken by the LSE to, according to the group, get key players out of the campaign.

The last part of the meeting was dedicated to planning the group’s next actions regarding the issues mentioned. Each issue was discussed by offshoot groups, who then returned to contribute possible campaigns or solutions.

Among the plans of Justice for Cleaners is planning a one day panel uniting London’s many Justice for Workers campaigns; submitting a grievance petition to the LSE signed by cleaners demanding that pay differences be addressed; and demanding proper equipment for bathroom cleaning and a changing room for cleaners based on legal premises.

The group also plans on starting a campaign aimed at students to increase mindfulness of use of LSE bathrooms. It will emphasise that most cleaners are black women largely without protective equipment and paid less than the London Living Wage.

For its next meeting, Justice for Cleaners has established that it will focus on planning a breakfast for cleaners, which will, among other things, facilitate the collection of signatures for the grievance petition.