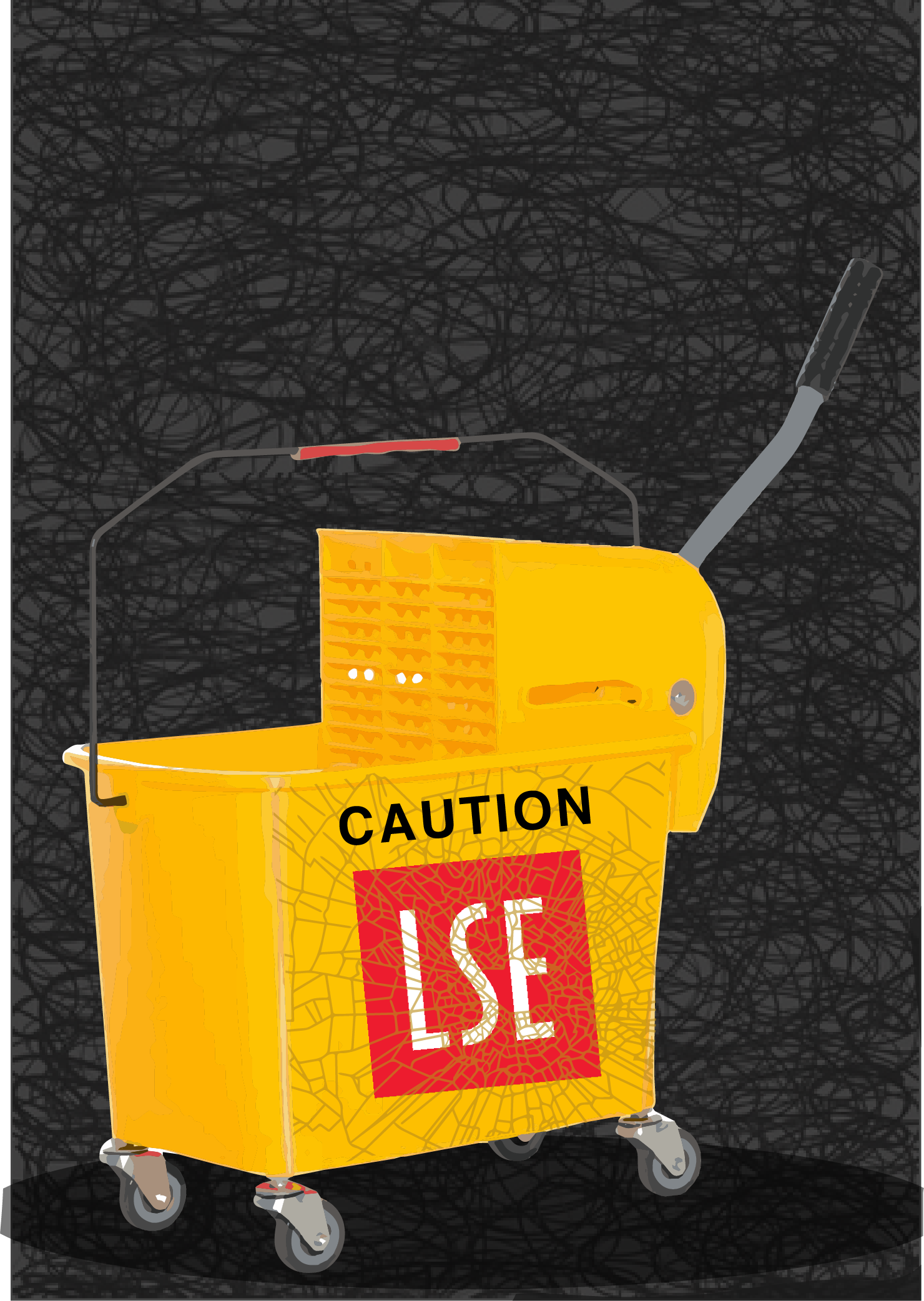 Justice for cleaners revived: in-house cleaners say they are “left in the Corridor”

On Tuesday 28 January, LSE cleaners held the floor in the first Justice For LSE Cleaner’s Campaign meeting of the year to discuss persisting discrimination on campus despite being brought in-house in 2017. Cleaners told the room of 50 students present at the meeting that little has changed for them since, particularly in terms of exploitative pay, access to promotions, and dealing with unresponsive management, among other concerns. “To be honest, the in-house was just a talk because they move you in house, but they leave you on the corridor,” said one of four cleaners present at the meeting.

Allan Blair, director of Facilities at LSE, nevertheless, pushed back against these claims. Blair responded to queries about cleaners in an email to Student’s Union representatives during the first week of Lent term: “All staff are on the standard LSE contracts of 35 hours per week. At the time of the transfer, cleaning staff were moved onto salaried contracts (they were previously paid on an hourly basis) and their hours prorated against 35-hour contracts, “ Blair wrote. According to Blair, this contract also allows cleaning staff to continue to work above the 35-hour mark, and according to LSE’s overtime policy, “from time to time members of staff may be required to work above their paid weekly hours to fulfil their duties.” This includes unpaid work as well.

“If you have done research on the life of the cleaners at LSE, you will be amazed. Some of us start our journey at three in the morning,” said one of the cleaners. “Some of us live as far as Croydon– to get here at six so when you come here at nine o’clock, you meet your classroom as tidy and clean, and you feel your environment as good.”

“We want to have work and life balance,” said the cleaner. “LSE working policy is 35 hours per week; why we cleaners we [can’t do] the 50 hours or 60 hours to make ends meet? [With] the 15 hours extra I worked over the past 12 years, I could be better off…So we need to break this chain of poverty.”

The cleaner also lamented that they were not allowed the same graduation along the pay scale that other long-term employees are afforded. “We’ve been here 15 years: why do we still remain on London Living Wage? That’s what we want to tell LSE; we have eyes, and we can see,” said the cleaner.

Blair nonetheless wrote that cleaners are allowed the same capabilities as other professional services staff as they are all on the same pay scale. “By being on the School’s salary scale, they are able to progress through the incremental points of the pay grades for each year of service unless they have reached the top of the standard range of the grade,” he wrote. “As is the case for all professional services (PSS) staff, they would be able to progress to different pay grades by either i) applying for a position at a higher grade or ii) the position they are in being re-graded as a result of an increase in responsibilities due to operational requirements.”

Rather than narrowing their contract, cleaners at the meeting expressed their desire to be compensated with the same amount as other employees on the 1 to 5 pay scale. “You sacrifice yourself to survive, and the other person is only trying to put you down,” said the cleaner. “‘I can only give you one pound for working in the night’: no this is not right. And you students you know it’s not right.”

According to LSE’s overtime policy, staff in bands 6 to 10 on the pay scale can only take advantage of TOIL (time off in lieu) as remuneration for additional labour. Staff in bands 1 to 5, however, are allocated 1.5 times the pay of their salary band if they work more than 35 hours/ week or on weekends. “We don’t mind doing longer hours so long as they give us what is our right: time-and-a-half after 35,” said the cleaner.

Blair confirmed the overtime policy for different bands. “Not all staff receive extra pay for working additional hours. Overtime rates for staff on bands 1-5 vary across the organisation depending on specific contractual arrangements (due to operational need),” he wrote. “In the majority of cases, staff are expected to take TOIL in the first instance before an overtime payment is made.”

In addition to the years-long campaign, cleaners told students at the meeting that they have attempted traditional methods of conveying concern to LSE management, to no avail. “You text, no reply” said one cleaner. “Sometimes they block our phone. So this is really really really awful.” Blair denied accusations of no response. “The same grievance policy and procedure applies to LSE cleaners as to all PSS staff.,” he wrote.

Lastly, the cleaners remarked feeling invisible in a school “founded with the aim of understanding the causes of things and for the betterment of society”. “And the bills are saying everywhere… we make a better world 2030: why can’t they make a better world for cleaners first?” said the cleaner. “This institution is a big builder of social mobility. And they don’t do it on their own doorstep.”

The four cleaners at the meeting agreed that students are the best chance they have at garnering attention from the LSE administration. “If you are not students here, there is no LSE institution,” said one of the cleaners. “You are the most powerful tool, you are the person who can say ‘we shut down LSE because of the mistreatment of the cleaners that are not getting equality’,… who can go to shut these people up and tell them ‘look they’re also human beings, go and talk to them, go to listen to them’.”

All cleaners present at the meeting chose to remain anonymous due to fears of professional repercussions.