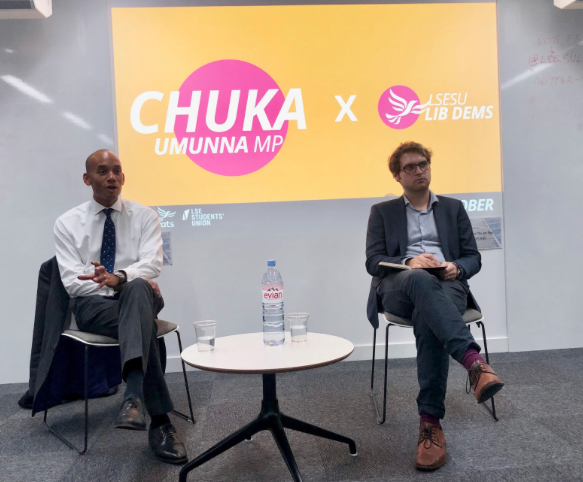 In an event chaired by Dr Florian Foos, Umunna came to campus to speak to students about his party’s policies, his journey as a politician, and how students can get involved in the next general election.

Addressing a full house, Umunna said, “We need to look at the world as it is now and think about how can we make our way forward.”

Umunna, a former Labor Party MP, is the current member for Streatham and will be running in the next election for the seat of London and Westminster. In February this year, Umunna left the Labour Party to form the Change UK party, from which he then resigned in June to join the Liberal Democrats.

He comes to campus under the prospect of a hard Brexit and a possible general election. Students took the opportunity to learn more about Umunna’s decision to leave the Labour Party, the Liberal Democrats’ prospects in the next general election, and why the party is campaigning for a people’s vote to stop Brexit.

Umunna said of current British leadership:  “If you want to be leading, then you’re going to have to step up because there’s someone else to fill that space.”

An attender asked Umunna whether the nation should accept that Britain is less progressive than we would like to think, a proposition the MP rejected. He spoke about the grievances of “Leave” communities and highlighted that they are not different from those of “Remain” communities. He said that the voting differences comes down to the “Remain” communities, believing that exiting the EU would not solve those grievances.

When asked about his impressions of the MP’s presentation, Robert Whittle, third-year International Relations student said, “I was impressed by the way Chuka Umunna was able to have quite a sensible conversation with us and took every question very well and engaged with us without jumping around the questions, which is rare for politicians.”

President of the LSESU Liberal Democrats Society and third-year BSc Government and Economics student Aadil Khan told The Beaver: “This society is offering a unique opportunity to actually win the seat of Westminster and offering LSE students the chance to campaign for their next Liberal Democrat MP.”

The LSESU Liberal Democrats and Umunna proposed that if students find the Liberal Democrats’ policy position convincing as progressive liberals, they should come out not just to vote but also to help the party campaign.

Umunna stressed the importance of persuasive and emotional arguments and the fact that students’ voices can be powerful enough to convince their communities of the need for change.