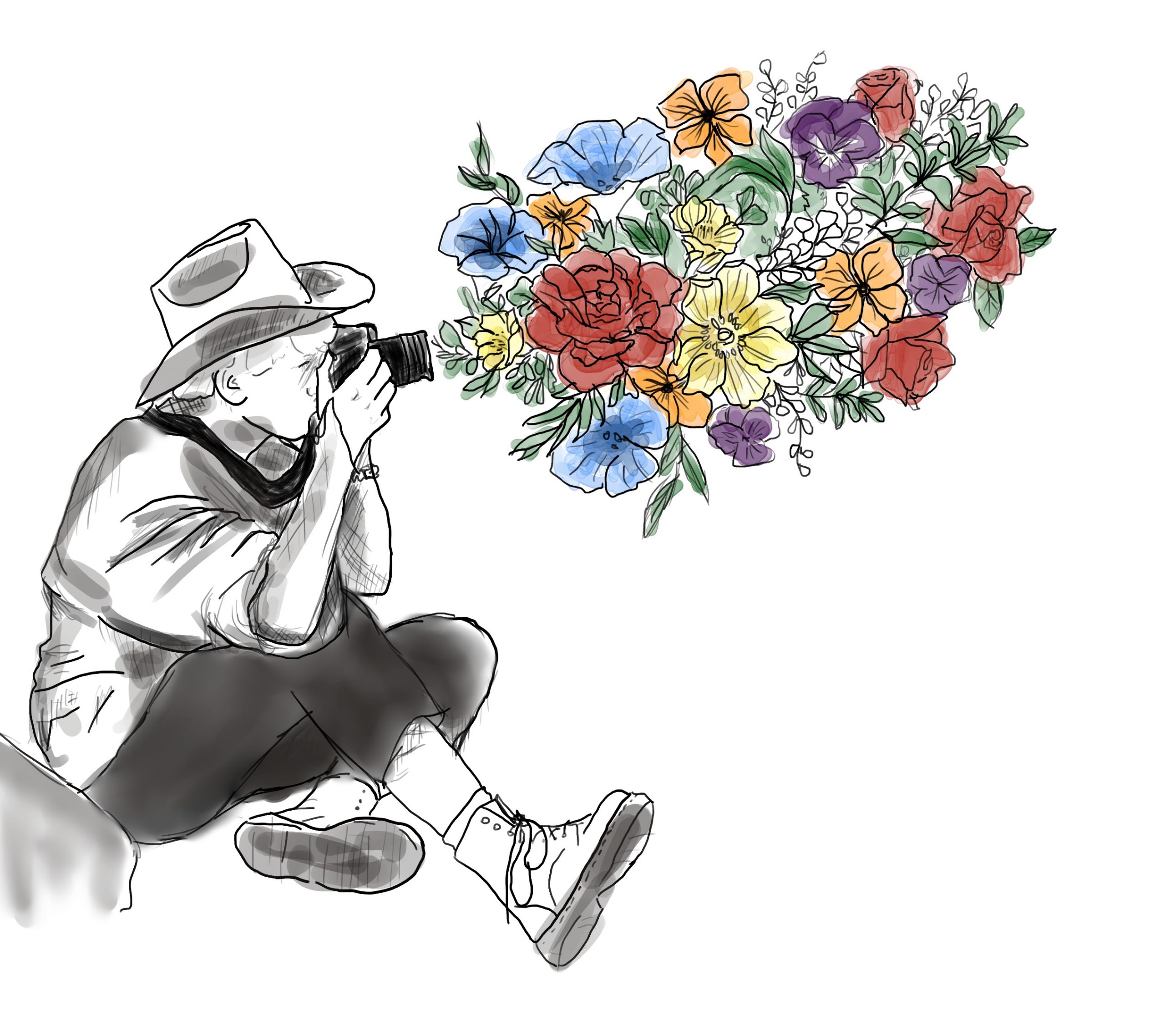 Lights Up on Jo Parker

For this (slightly late) Flipside pride interview, I spoke to second-year International Social and Public Policy with Politics student Jo Parker. Anyone who talks with Jo for long enough notices something special: Jo listens — properly listens — like no one I’ve ever met. I tried to channel this skill for their interview, listening to them as they spoke about their passion and talent for lighting design, their journey to understanding their gender and sexuality, and their Quaker faith. Where these threads cross stands the deeply thoughtful, brilliantly clever, endlessly enchanting Jo Parker.

Jo’s A-level theatre teacher once said to them, “You’re not very good at acting. Try backstage.” So they did. Jo went down the list of backstage roles: sound seemed boring; they couldn’t draw, so couldn’t do costume; and weren’t “very good with [their] hands,” so set construction was out of the question. Lighting design was all that was left. Luckily they “absolutely loved it.” Jo is currently Drama Society’s Technical Director and has been the lighting designer of every one of drama society’s performances since they joined LSE.

Before moving backstage, Jo’s favourite part of the production process had been completely dissecting the play. They were able to bring this over into lighting design: “I feel like everything is important in the script” so they pore over their scripts, reading them around nine times before production week to ensure that their lighting reflects the plot, overarching themes, and the moods in specific scenes. Lighting is a deeply technical process, and yet speaking to Jo, it becomes clear that it’s just as artistic as it is mechanical.

By way of example, Jo walked me through the process of lighting their favourite project: Private Lives, one of the Drama Society’s performances last year. Noël Coward’s play takes place in just two locations, and it’s very naturalistic. “I could have done three lighting states and a couple of blackouts, and it would have worked.” Instead, “I followed the mood of the play through [the two couples] falling out of love, and then beginning to hate each other. I kind of tracked that with lighting.” Scripts that give Jo that flexibility are their favourite – that’s why “Private Lives felt like the thing where I’ve done best so far.”

Jo has a complicated relationship with gender. “I am somewhere in the transgender community. I haven’t worked out where yet. I’m somewhere between non-binary and transgender.” They mostly use ‘they/them’ pronouns, “but he/him’ makes me happy as well.”

“I think I’ve never felt like a girl or like that was the right thing. I was definitely a tomboy as a kid, but then I really liked some girly things. When I was 12, I started learning about non-binary identities.” Around that time, a couple of Jo’s friends also came out as trans, “so it was like a thing in my mind.” At 14, “I figured out that I definitely wasn’t a full girl and I started using mostly they/them pronouns. I told my family who were pretty much on board with it.” That was when Jo cut their hair and started dressing more androgynously.

Last summer, Jo started realising that maybe ‘they/them’ weren’t the only pronouns they liked: “Maybe I liked ‘he/him’. It’s been a very long process, and I’ve had labels for my gender as I’ve gone along, but none of them have ever felt completely right and the label I want to use.” They still haven’t found the labels they’re completely comfortable with. “I’ve just kind of accepted that it might not be something that ever happens. I definitely used to want labels and now I am a lot happier with the idea that I might not have them and that I might never have them. I just don’t think I need them in the same way that I used to.”

Because of the pronouns they used, for a long time, Jo felt like “I had to dress like nothing.” A lot of that feeling came from how others perceived them: “It’s quite difficult to make people realise that ‘they/them’ are the pronouns you use, especially if you’re dressing in a more traditionally feminine way. I think a lot of androgyny is about dressing traditionally masculine – I don’t think there’s a space for traditional femininity in androgyny.”

The ideas of ‘trans men can’t wear skirts’ was also a big part of the LGBT internet Jo was on as a young teenager. “They were like, you have to dress like the traditional people of the gender you identify with. I think that played a big factor. I don’t know if it’s happening less, or if I’ve just moved away from it.” This part of the internet has its share of toxicity, despite what one might expect. Jo believes this comes from a desire to be taken seriously.

Now, “there’s more talk about how clothing and gender aren’t the same thing. Things like TikTok show a lot of men wearing skirts and that makes me feel more comfortable diving into that side of what I’m comfy with.”

Gender may have been a complicated process, but Jo’s sexuality was less so. Jo describes themself as “bi and asexual.” They used the label ‘pansexual’ for a while – meaning being attracted to people regardless of gender, “and then I realised I wasn’t comfy with it… the way I am attracted to men and women feels different to me. But also, I would willingly date either of them.” The attraction isn’t sexual: when Jo was 13 or 14 they found the label ‘asexual’ on the internet and it clicked: “I get why people feel like that. That’s a definition that makes sense to me.”

Jo has never really come out, mainly because it was “that little of a deal” at home. Jo’s parents had made it clear to them and their siblings that there were no expectations that any of them should end up in heterosexual relationships.

Jo was brought up Quaker, and the Quaker faith has a long history of recognising gay marriage and fighting for gay rights in Britain.

Although the Quaker faith originated as  a subset of Christianity, Jo explains that they really enjoy that “you can make of it what you will: some Quakers feel quite Christian, some don’t.” What binds them isn’t the idea of a belief in a God or a scripture: “we’re all linked by the values of peace, equality, truth, simplicity, and then environmental sustainability is in there as well. It’s all about coming together around those values that we all hold.” In this vein, Quakers make decisions collectively, “we don’t have voting and we don’t have one person in charge. We all have to come together to discern and agree on a decision that everyone’s sort of happy with.” It was through this collective decision-making process that in 2007 “we collectively decided that we definitely supported gay marriage.”

Of course, Quakers are not in agreement all the time. “Not all Quakers are huge supporters of gay marriage and LGBT rights, I think we often forget about that.” A speaker at a Quaker event Jo attended a couple of years ago was a “feminist who didn’t agree with trans people. She was a TERF [trans-exclusionary radical feminist] basically… It was very problematic and there were quite a lot of, especially older Quakers, who actively supported her.” In line with their faith, Jo believes in hearing people out.

Their degree choice is surprising – the political sphere seems the complete antithesis of their faith: “It’s just a lot of people shouting at each other.” According to Jo, that’s exactly why it’s so interesting to them. Although they were raised in a staunch Labour household, “I always think about that at the end of the day, we all do want the same thing. Conservatives and Labour both want the country to be safe, and have a stable economy. They just have different opinions on how to do it. I think that there’s always a part of me that tries to humanise people who disagree with me. I want to work out where they’re coming from and work out what they’re afraid or unsure of, and then discuss from there rather than just yelling that they’re wrong, because that never works.” Jo tries to stay away from political debates online. On the rare occasions they’ve ventured in, they are known to cite their sources, like the perfect LSE student.

Beyond the faith, the Quaker community is a massive part of Jo’s life and has been since they’ve been a teenager. Jo works with Quakers a lot, helping organise three national events with them while they were a teenager. They also go to events themselves and have a big network of Quaker friends, two of whom they live with. “Quaker events are really intense. You spend like 9AM to 11PM every day with people for a week straight.” It creates “a sense of community that is really hard to find in normal friendship circles… It’s my safe space in a lot of ways.”

The intensity of Quaker events reminded me of the week before a play opens, fittingly referred to as Hell Week. I asked Jo if they felt at all similar. “Yeah, I think Drama [Society] is my LSE equivalent [of a Quaker Meeting].” Although it’s not a perfect substitute by any means, “it definitely fits into that bit of my head.”

All the creative types have struggled this year, particularly those in the performing arts. Jo is no different. A year ago, lighting was their main “creative output.” Now, although it doesn’t “fill the gap” completely, Jo has turned toward photography which lets them “get excited about lights and lighting angles.”

When not taking pictures, Jo is spending their time crocheting: “Because again, it’s like the process of you start with nothing and you get something and it sounds really pretentious, but that’s what theatre feels like.” It’s in character. Dedication to heartfelt and artful craft might be Jo’s defining feature as an artist.