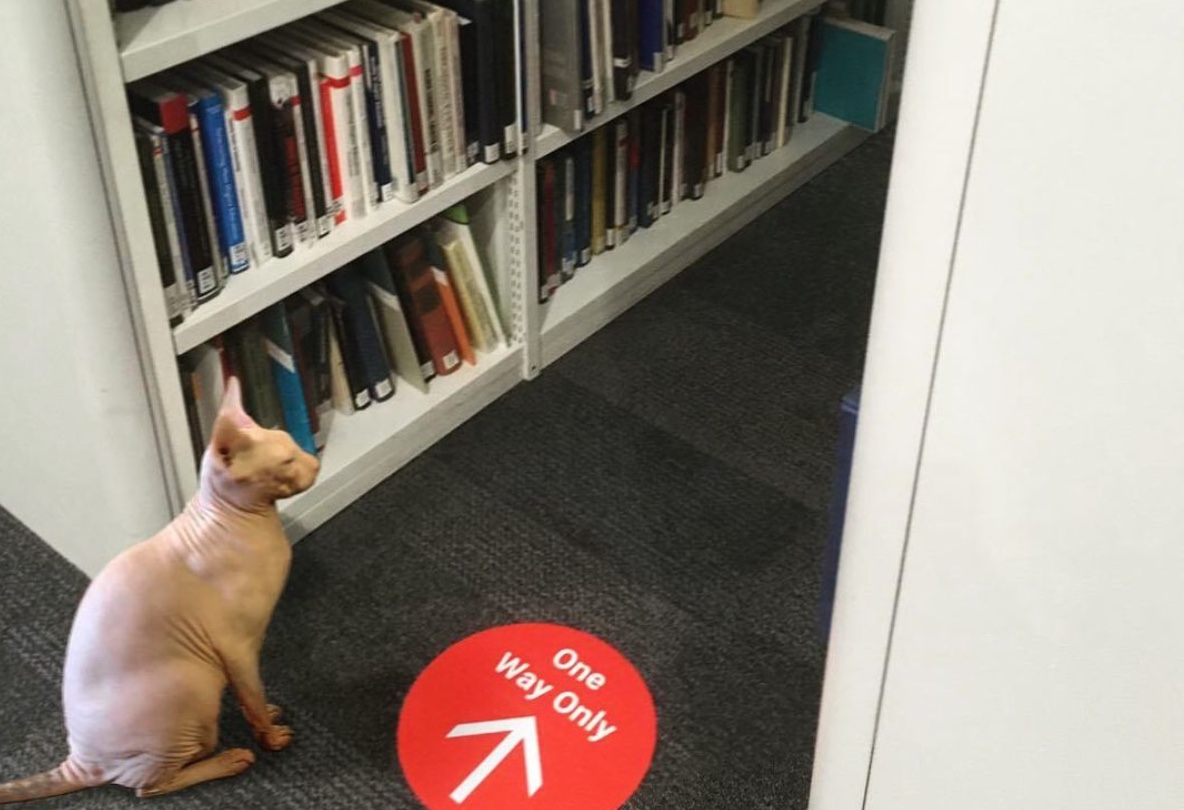 The LSE library, plagued by chronic under-interest from the student body as well as a persistent vermin problem, has announced a radical new move: the adoption of an official library cat. Reached for comment in Week 0, a spokesperson for the Library said the move was a logical one: “We were having all these problems with mice, because students keep eating in the library, despite posted signs,” said Stan F. Eline, part of the Library’s Student Outreach Team.  “We were having endless meetings, until finally somebody just said, ‘Why don’t we just get a cat?’ And no one could think of a better solution.”

The cat, which is currently in the care of a veterinarian for immunisations and minor surgery, was adopted from a local shelter, The Beaver has learned. It is a hairless, hypo-allergenic ‘sphynx cat’, so as not to affect vulnerable students. The cat’s lack of fur means it will not be allowed outside the Library, lest it suffer in the harsh London weather, or be kidnapped by a rival university.

“We’re very concerned with the cat’s well-being,” said Eline, “We know there are lots of rival uni’s that would love to kidnap the cat to get back at LSE for surpassing them in the rankings. We’re also worried it might get cold, and frankly that it could find more gainful employment somewhere else.” Posters will be placed at all entrances to the Library to remind students not to let the cat out. “We’re really counting on the students here not to let the cat out,” said Eline.

The Library hopes the cat will be a valued pest-control professional, but moreover that it will drive student engagement. “We have a lot of trouble getting students into the Library,” Eline opined, “Even more so with this COVID thing, we’re worried no one will come and the whole place will be empty. The Library is a tremendous expense for the school, and in these tough financial times, we want to put our best foot forward.” Eline declined to answer questions about threats to the Library’s continued operation. “Whatever problems we face, we have a cat now, so please come and say hi, maybe check out some books, maybe leave your food in Escape as multiple posted advisories recommend.”

As part of this outreach, the cat’s name is being outsourced to a committee of students, who have requested that they remain anonymous so as to avoid harassment. When contacted for this article, LSE Director Minouche Shafik said, “Improving the appeal of the Library is definitely in the top ten priorities for the School and our LSE 2030 plan. I heard somewhere they were thinking of calling the cat ‘Meownouche Shafik,’ which I think is a great idea.” Pro-Director for Research Simon Hix commented as well: “It’s a novel idea – I can’t wait to make a Masters student do a dissertation on its effects. I think they should call it ‘Simon Hiss’. Well, ‘Professor Simon Hiss’ would be more proper.”

According to a source on the Naming Committee, possible names include: