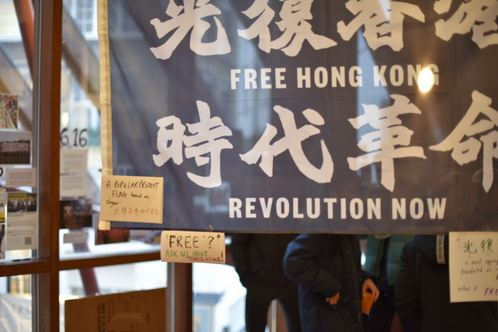 Earlier last week, on 18 November, the Alliance led a body of students, faculty, and alumni in penning an open letter to LSE Director Dame Minouche Shafik. The letter details intense concerns that foreign funding is wielding a deleterious effect on the university’s principles of academic freedom and human rights.

The Alliance and its associates outline fears that overseas autocratic regimes are funding programs and student groups, corroding LSE’s commitment to free speech. The Alliance asks Shafik to reconsider choices made by the university, which the authors believe pose a fundamental threat to the integrity of the university’s human rights principles.

They reference the controversy over the recently suspended China programme due to the actions of its main donor Eric Li, which was first reported by the Financial Times on 27 October. Li has previously defended the Chinese government’s response to the Tiananmen Square Protests and allegedly maintains turbid ties to the Zhongnanhai. The letter also notes the ongoing debate over the potential propagandist function of LSE’s Confucius Institute for Business London (which is part of the larger Confucius Institute network) given the institute’s sponsorship from the Ministry of Education of the People’s Republic of China.

Additionally, the letter expresses grave concern over the experiences of students participating in the on-campus solidarity rallies in support of the pro-democracy protests in Hong Kong. The letter holds that some participants experienced intimidation and harassment during the rallies from other students who did not hold the same political views.

The Alliance accuses the Chinese Students and Scholars Association (CSSA) of interfering in the rallies and notes that this same suspicion is held by the Royal United Services Institute, an independent British think tank on international defence and security. The letter argues that the CSSA and related organizations on campus will fundamentally compromise the ability of LSE students to express their political opinions on campus and abroad.

The CSSA is the Chinese governments’ official organization for Chinese citizens studying outside the People’s Republic of China, which chapters at several foreign universities around the world. The chapters are managed by the Chinese Communist Party’s United Front Work Department, with Chinese embassies and consulates overseeing local CSSA chapters. At LSE, however, the CSSA is not an official student group and is unaffiliated with the LSE Students’ Union.

The letter concludes with an appeal to Shafik for action. Detailing five suggested steps to curtail undue influence from authoritarian foreign governments, it calls for a review of diligence processes for financial donations, consistent consultation with academic experts in decision-making processes to ensure the protection of academic freedom, revision of the Ethics Code, and an audit of existing student societies for “potential links to autocratic surveillance functions.” The letters’ cosigners currently number over 130, a list that continues to grow as the Alliance awaits a response from the university.

Later in the week, on 21 and 22 November, the Alliance unveiled an art exhibition in the Saw Swee Hock Centre, which illustrated the daily, lived experiences of the protesters in Hong Kong. The exhibition, modelled as a timeline of the protests, was intended to address insufficient media coverage of the protestors themselves, which Alliance members say is unfortunately typical of Western news narratives of the pro-democracy activists in Hong Kong.

Jessica Chan, a student from Hong Kong and one of the organizers of the art exhibition, said that the exhibition was attempting to address the complexity of the local experience, as the ethnic diversity of Hong Kong’s population can make defining who is “local” a challenge.

Another student organiser, also from Hong Kong who asked to remain anonymous due to security concerns, added that the exhibition sought to enhance the protest narrative by providing a look into the individual experiences. As international headlines and news outlets often focus only on the big picture, reporting mostly on numbers, statistics, and broad policy changes. She said this exhibition was a way to understand the protesters holistically as individuals, highlighting their personal stories.

These protesters are often confronted with significant decisions, this student organiser said, with potentially enormous consequences. “They worry about their families,” she said, “and they have to choose whether they should go back or if they should stay [at the protest], run this way or that way.”

She continued that this exhibition was a way to humanise the people behind the mask, reminding international audiences that the protesters are regular people, many of them young people, who try to lead normal lives in-between protests. “I don’t see these stories in the major newspapers. We’ve tried to use the exhibition so that when people come to us, we can tell them about how we [young people of Hong Kong] feel and how we participate and tell them more about who are the people behind the mask.”