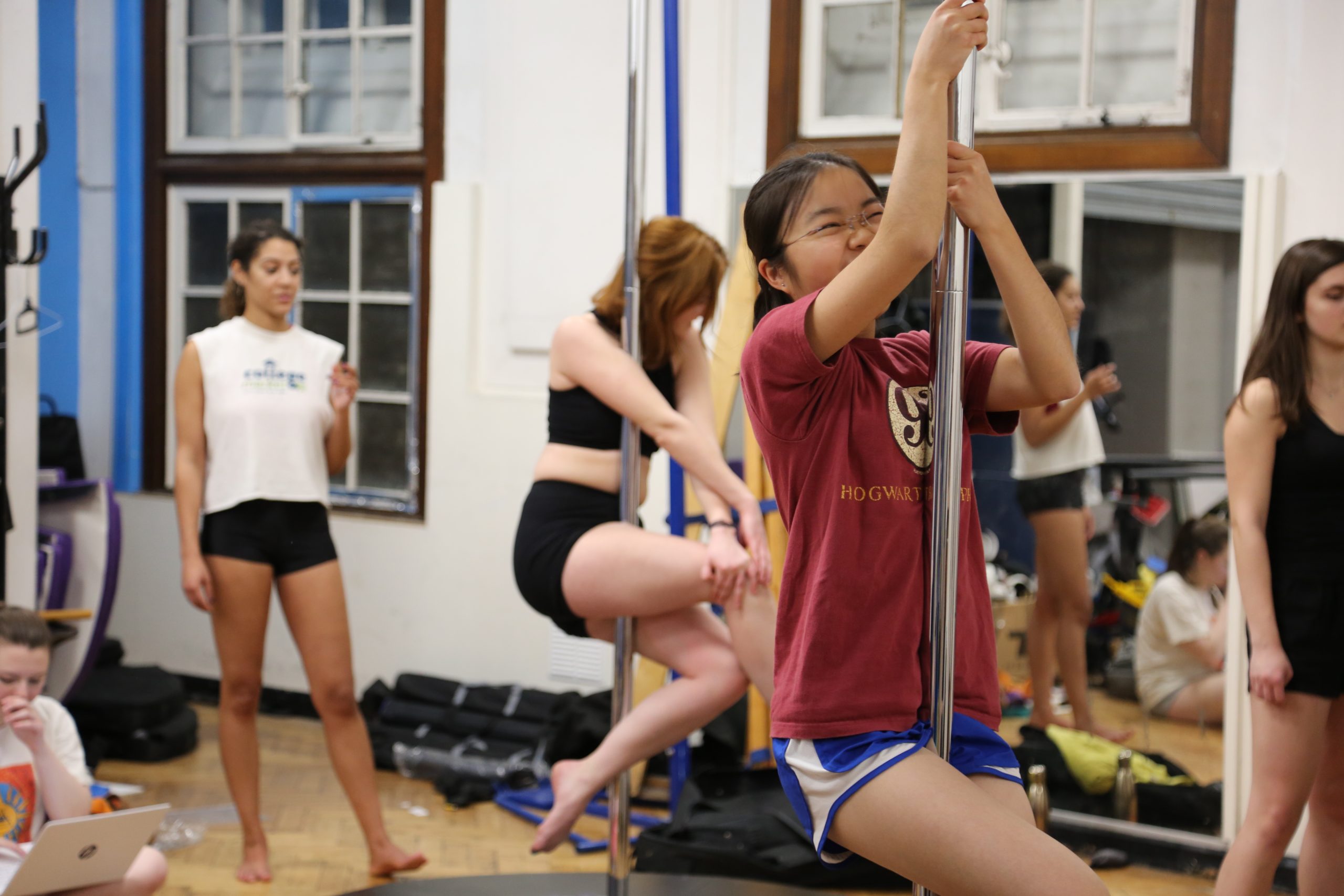 All Photography by Angie Abdalla

Strippers, sex, prostitutes, promiscuous females, perhaps even the recent movie ‘Hustlers’. These are probably the first few things which come to mind when one mentions pole dancing or pole fitness. While such stereotypes may hold true to a certain extent, pole fitness is so much more than the heteronormativity and stigma attached to it in the media’s portrayal. As Flipside’s theme this week is sexuality and in line with the athletic union (AU)’s upcoming campaign ‘This Girl Can’, I sat down with Héloïse Regnault de Montgon (a familiar face to readers of Flipside and the Events Officer for the LSESU Pole Fitness) to debunk the misconceptions surrounding pole fitness and to discuss pole fitness in relation to empowerment, mental health and LSE’s pole fitness society.

“[People tend] to ‘strongly sexualise’ pole dancing and associate it with sex workers in a bid to shame them.”

Naturally, the first question I asked Héloïse was to describe what pole fitness at LSE was really about. “It’s pretty physical,” she said before we broke into a unified chuckle of understanding. One of the biggest misconceptions people get from seeing the effortless fluidity of professional pole dancers on television or in real life is that pole dancing is easy. Having tried it out myself during first year and after dropping by a beginner’s class to capture some pictures, suffice to say I knew pole was anything but easy. Nevertheless, she described it as a ‘great sport’ with an exceptionally ‘supportive environment’. Pole fitness helps you ‘develop what you want to know about your body and confidence’ on your terms. Even though direct skin contact is required to stay on a pole, Héloïse was quick to reassure that short clothing or sleeveless tops weren’t mandatory in pole fitness classes. “You can just roll up your sleeves so don’t feel uncomfortable about the clothing part. People aren’t judgmental about your body. People don’t give a damn.”

Before I could move on to the next question on my list, Héloïse beat me to the punch by leading the conversation to talk about two main tendencies of people to ‘strongly sexualise’ pole dancing and associate it with sex workers in a bid to shame them. Agreeing that pole can be sexual ‘if you want it to be, but it doesn’t have to be’, Héloïse made it clear that pole dancing ‘can make you feel great about yourself’ regardless of your gender. She enlightened me on the fact that LSE’s Pole Fitness does indeed have ‘quite a few straight guys’ in the club (not that it matters anyway) and she wanted to clear up the heteronormative prejudice and stigma of pole fitness and encourage more men (regardless of sexual orientation) to join LSE’s Pole Fitness society. “You can build a lot of strong friendships, strong bonds with the people in your (pole fitness) team just as any in other teams.”

This social aspect of pole fitness is precisely what enticed Héloïse to stay on for another year in pole and become their Events Officer. She proudly organises many of their social events, including their trip to Budapest. “I feel like at LSE, sometimes, it can be hard to find your crowd, find your people. Maybe you can feel socially awkward or not know how to talk to people.” “I really wanted everyone to have a great experience.”

After hearing such positive things about the social aspect of pole fitness, I was also curious about both the progression and the competitive nature of the sport. There are 3 levels of pole classes at LSE – Beginners, Intermediate and Advanced. I wanted to know if Héloïse had moved up a level after being there for over a year. She laughed and said that she was still in the Beginner’s class because she was having a more relaxed approach to classes. She explained that most of her friends moved up levels really fast but that progression wasn’t an absolute necessity. “If you get into it, if it’s your thing as it often ends up being the case, if you go every week, you can, in less than six months, move up to more difficult stages. Me, I’m more focused on the social parts and I’m having a chill approach to it.”

The London Pole Varsity (happening on 29th February 2020) and the LSE Pole show (happening on 20th March 2020) are two of the main events LSE pole fitness gets involved in every year, regardless of skill level. LSE also competes against other universities such as Imperial College London, although Héloïse maintains that the spirit is always ‘still friendly’ and ‘positive’.

Additionally, Héloïse highlighted the empowerment within the sport so I was keen to know her opinion on the ‘This Girl Can’ campaign organised by the AU. She did not disappoint. Seemingly apathetic to the upcoming campaign, Héloïse eloquently explained how she felt that the campaign was somewhat centred on a traditionally male-oriented idea of empowerment. She questioned ‘whether traditional male fields like business and sports’ are the only ways that ‘women can be empowered’. “I don’t think they are inherently feminine or masculine concepts. So, I don’t believe in only one way of giving power back to women but if it fits you, that’s okay too.”

“LSE’s Pole Fitness club is an open-minded and accepting one.”

Stressing that pole fitness wasn’t just about sports or empowerment but ‘a way to bond with people in a team’ regardless of gender or various differences, Héloïse drew me into a conversation on mental health because she felt that there wasn’t enough discussion at LSE about issues that were indiscriminate to gender. “Mental health is quite a hot topic at the moment but it’s still not taken too seriously. I feel like a lot of people can struggle with isolation and mental health issues and a lot of stress and workload. For me personally, it’s helped a lot to meet my teammates and it has built a strong support system without a doubt. So, if you’re interested in that, pole can definitely be a great way to just start doing so and feel more comfortable in your experience at LSE.”

Adding on to this, it was also made abundantly clear that LSE’s Pole Fitness club is an open-minded and accepting one. One does not have to be experienced, have a dance background (Héloïse doesn’t) or sporty background, have a certain body type or be of a certain demographic to join. Héloïse praised her teammates for being extremely dedicated and hardworking whilst noting the lack of a ‘clique’ mentality in pole. She even strongly emphasised that anyone could join the society throughout the year, not just at the start. “It’s pretty open. You can talk to anyone. We’re always keen on meeting new people. You can always just come to the social part if the sports part is not your thing, most of them do that.”

“You don’t have to be a certain number to do pole, have a certain body type, be in a certain physical condition.”

Having spoken to Héloïse for awhile and not wanting to take up any more of her birthday (which I didn’t realise when I scheduled the interview until I saw it on Facebook the morning of the interview), I thanked her for enlightening me on the fact that aside from its stereotypes, pole was also more than just empowerment. To which, she replied with a fitting conclusion to end the interview.

“I would say that empowerment, unfortunately, has been capitalised. It’s been made to sell stuff more than anything. It’s a word you can use to describe pole but I would also say that pole is a pretty universal thing. It doesn’t correspond to a specific gender, specific body type. I think it’s really your own interpretation of it. That’s what makes it great. You don’t have to be a certain number to do pole, have a certain body type, be in a certain physical condition. It’s really something that is adaptable which I think is extremely important.”

After reading this, I hope that any misconceptions or prejudices you may have had towards pole fitness have been replaced by a desire to be a part of this society, or at the very least appreciate its nuances a little more. After dropping in on a session to watch and speak with the people involved, I have nothing but admiration and respect for anyone participating in such a physically demanding sport.

If anyone would like to get involved in LSE’s Pole Fitness, they run classes on Wednesdays (Beginners, Intermediate and Advanced) and a chill beginner’s class on Friday.