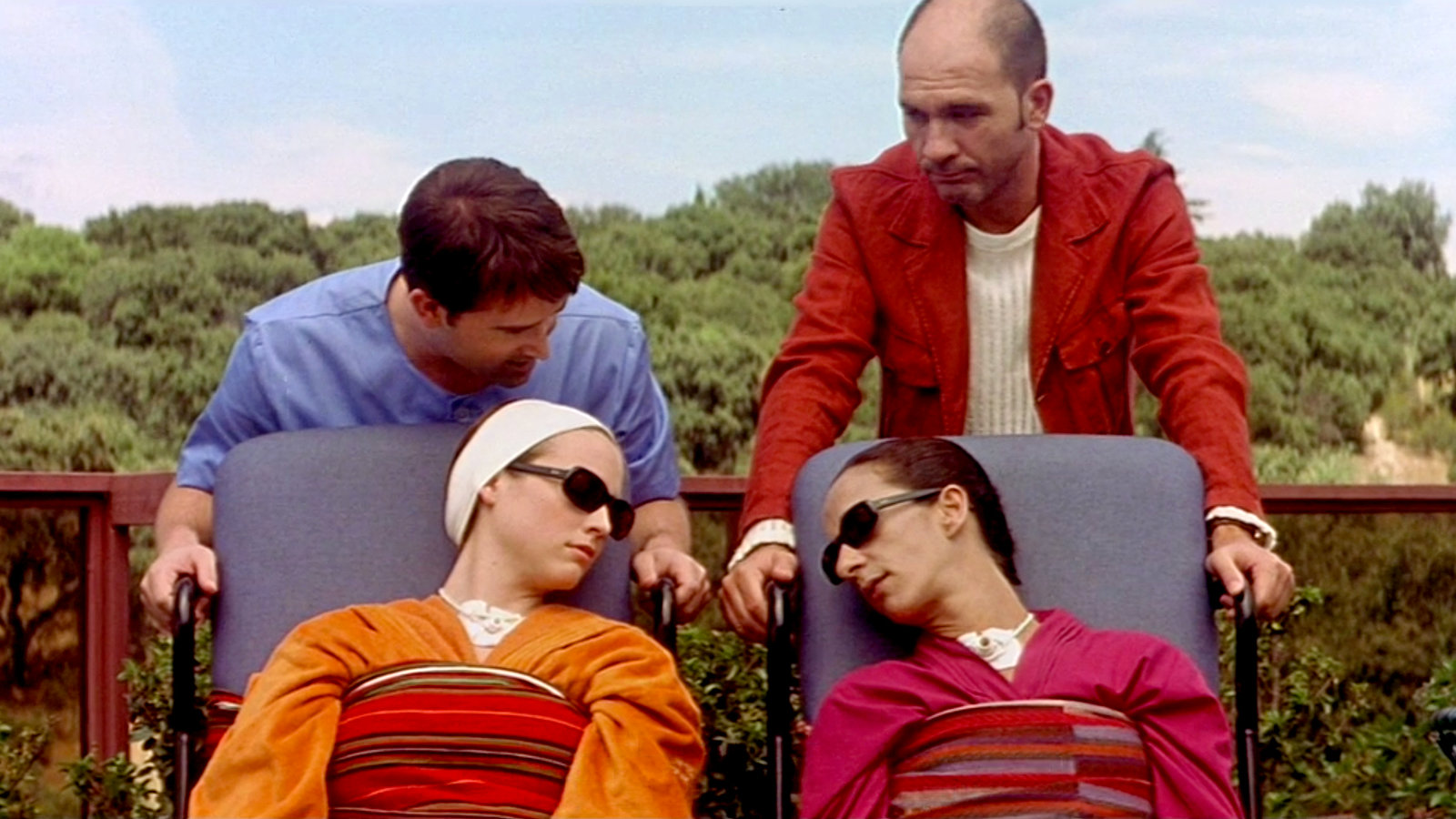 Almodóvar’s film Hablé con Ella (Talk to Her, 2003) aestheticizes the female body, masking sexual violence in ways that are as nuanced as they are harmful. The treatment of the main female character, Alicia, and her rapist Benigno have been justified as part of the director’s interest in Immoralism, an artistic mode in which moral principles are deliberately violated in the name of art. Its depiction of  sexual violence can perpetuate harmful consequences for understandings of rape. The film uses Alicia’s rape as a plot device to move the story forward. It intentionally discomforts the viewer, decoratively parading female nudity, and, in doing so, shifts focus towards the power of male friendship. Although the film is miles away from similar narratives like Brimstone and Treacle, its less sinister notions are perhaps even more dangerous: that rape is not as important of an issue when accompanied by a backdrop of “ravishing romantic obsession, loneliness, and friendship”. The treatment of sexual violence is disguised as ‘love’ by the sympathetic characterisation of the male nurse, Benigno.

The rape scene is interrupted again by another close-up of Alicia’s breasts, before the miniature male figure in the short film climbs into a plastic reconstruction of what resembles female genitalia. This symbolically simulates non-consensual intercourse between both the silent film actors and Benigno and Alicia’s comatose body. It is suggested that the giant woman in the symbolic film reaches climax despite being asleep and unaware. The film cuts to Alicia’s face while the words ‘and he stays inside her forever’ appear. The man’s miniature size and the allusion to female pleasure diminishes the audience’s awareness of what happened, despite its confirmation soon afterwards. The juxtaposition between the obvious lack of consent and the idea of enjoyment disguises the reality of the rape, especially as the parallelism with the silent film involves a genuine couple.

By displacing a physical rape with an almost pleasant scene, Almodóvar prevents the spectator from confronting their feelings towards the rape. Instead, one continues to sympathise with Benigno. The omission of the rape scene lets the viewer ignore the full impact of the experience on Alicia. The camera’s attention to the female body and focus on the emotional dimension of the male relationship create a silencing effect on the female characters.  Even when the women are talked to, their superficial characteristics are largely the focus of the lens. Through the film’s denial of scenes including a court-case or Alicia’s physical recovery, Almodóvar manipulates the representation of sexual violence in a way that changes our relationship to Benigno, allowing us to easily accept both the crimes of the characters and the film’s treatment of them.

Alicia’s compliant body is more sexualised in its passive state than in her physical life. Her parted lips and permanently sealed eyes convey a naked vulnerability, complimented by the gracefully languid arm gently laid beside her head. Her odalisque-like pose seems intended for Marco and the spectator’s admiration. Her exposed breasts foreground her erogenous zones, eroticising her lack of autonomy rather than portraying her as an entire person, a whole body. Her passive representation aligns with gendered stereotypes of beauty, delicacy, and grace which invites the lustful or adoring male gaze.

In this way, the film represents the female body as gaining aesthetic value in relation to its vulnerability. When Alicia wakes up, the lens moves away from her and focuses on the male protagonists instead. The female body becomes an aesthetic device when Alicia is in her most vulnerable state. She is erotically caressed by hands and eyes; even after Marco is heartbroken, the scene follows his look towards Alicia’s breasts through a half open door. Directly preceding the rape, the lens focuses on Alicia’s parted lips while Benigno removes her bra, before the scene cuts to the black and white film and the rape scene.

Karen Boyle’s analysis on the representation of female victims of sexual violence in British tabloids like The Sun suggest that readers are encouraged to “make sense of sex crime in the context of sex”. The example of the alleged gang rape by eight footballers was framed in light of their success in sport. This diminished the rape’s status from an abhorrent sexual crime to a ‘sport’, suggesting agency for the victim. The reality of crime and victim is overshadowed by the alleged perpetrators’ fame and success. The picture used of a model with a coy smile, suggestive clothing, and inviting gaze towards the camera lens was intended as a sexually provocative spectacle. Instead, this provides the reader with sexually charged material leading to the association of rape with sex rather than violence.

Her objectification seems to “promise striptease”, a false and alluring representation of the real victim, in a way not far from glamour models on Page 3 and ‘Lad Mags’. As in Talk to Her, this sexualisation of the rape victim not only idealises her passivity and victimhood, but also works to obscure the reality of rape so the viewer does not have to confront it and may even sexualise the concept themselves. The female victim is denied full personhood to privilege male desire, which is thrust upon every reader, solidifying the hegemonic structures of feminine inferiority and masculine dominance. Both films and magazines contain media representations which have the power to undermine the seriousness of sexual crime through the objectification and sexualisation of its victims.

In Talk to Her, Alicia is not represented as deserving of the rape, and fits neither mould of the virgin or the vamp precisely due to her vegetative state. However, the promise of a future affair between her and the other male protagonist (Marco)  at the end, perhaps implies that she is a willing recipient of male desire. This is exacerbated because her own mental and physical recovery following the rape is completely ignored in favour of a depiction of Benigno’s psychological qualms and the resolution of his friendship with Marco. In this way, she subsumes both categories of virgin and vamp, because her non-autonomous body is inviting to the audience. No resistance is shown on her part due to her passive state, while she also remains innocent and oblivious as a character the whole time. News coverage of violence against women who fit in the vamp category, such as prostitutes, is rare, and sympathy tends to swarm towards victims who ‘deserve’ it— this usually only covers white, middle-class women who conform to conventional sex roles.

In Talk to Her, the rape scene itself is signified through a short, artistic film which creates the major point of visual spectacle in the film as an aesthetic production. This is done to intentionally obscure the rape so that Benigno can become a morally complex character. One of the outcomes of this choice is the reduction of crime to spectacle, and a focus on the portrayal itself, rather than the character’s victimisation. In real life scenarios, it is likewise the case that media and public attention is devoted primarily to cases where the rape attack creates an air of sensation and the victim’s story ends tragically.  Almodóvar would not have been able to portray the rape scene or the rapist as such if Alicia had died, as more attention would have to be paid to her character’s development. In fact, the rape’s consequences of pregnancy are named a ‘miracle’ by Benigno because of its positive effect of Alicia waking her from her coma. Rape is often categorised as newsworthy by the press if it is dramatized and linked to tactics intended to shock and sensationalise violence against women, so that only the most brutal cases are made prominent.

Male perpetrators are also often pathologized as monsters and psychopaths in order to distance them from the title of ‘rapist’, so that social structures which normalise rape culture do not have to be disrupted. People are not willing to accept that members from their own communities can be rapists. When middle-class white rapist Brock Turner was charged with rape in 2015, news outlets such as USA Today characterised him as ‘Stanford University Swimmer’ rather than ‘rapist’, in article headlines. In contrast, the media almost always labels people of colour as rapists before any additional personal details. However, rapists with social currency, irrespective of their race, often also use mental illness to explain and mitigate the crime. A recent example is the R Kelly case, which relied on personal abuse experiences to set up a sympathetic frame for his actions. Women of colour who are victims of sexual assault are gendered and racialised in a way which both blames them and marginalises them as ‘other’. In contrast, Alicia is idealised because she fits Westernised ideals of beauty.

While Almodóvar’s Talk to Her has some philosophical value as an aesthetic cinematic production, its representations of sexual violence execute an ethical step backward by sexualising a woman who is ultimately a victim of sexual violence.