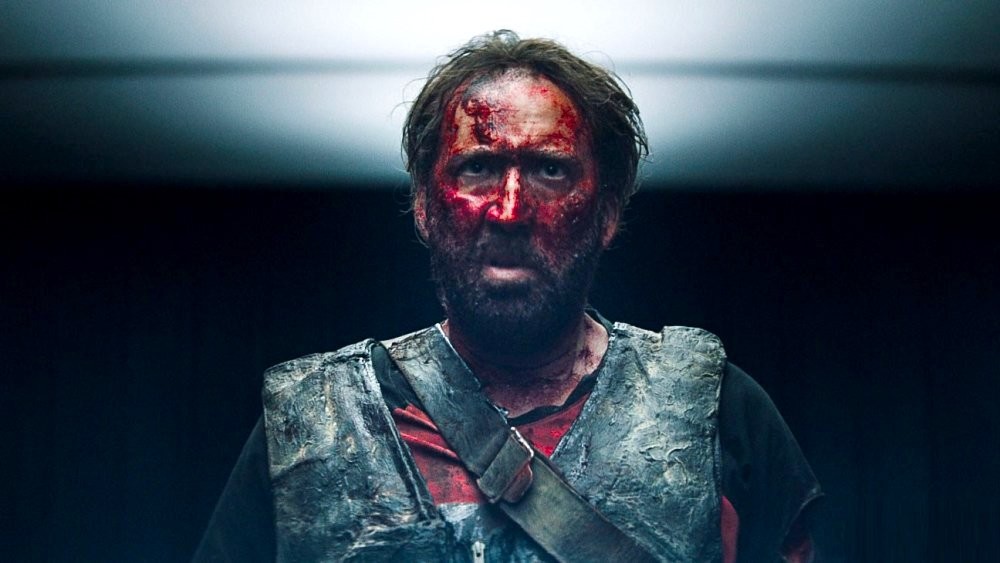 I can’t say I’d given much thought to what Nicolas Cage might do next. His films come thick and fast as he tirelessly works to pay off his never-ending tax bill. His role in Mandy suggests he’s almost finished – paying off the debt, that is, given its strangeness. It’s hard to imagine anyone thinking an LSD-induced revenge film is the pay packet to hold off the bailiffs. But if you’re crazy enough to make such a film, you’re crazy enough to assume it’ll pay. Everything about this makes me thankful for Nicolas Cage.

The less you know about Mandy going in, the better. My first thought leaving the cinema was, ‘How on earth did the director articulate this vision to his cast and crew? What did he say?’ Instead of regurgitating the same synopsis you can read anywhere, I’ll give you the pitch I imagine director Panos Cosmatos gave investors and producers. ‘Think of The Evil Dead; the cabin, the tension, the isolation. Imagine it merged with Dario Argento’s back catalogue, teasing out the dissonance, the colours, and the eighties soundtrack. Sprinkle a bit of Hellraiser on it. Maybe Goblin can provide the score. Like most seventies prog-rock bands, they’ve overstayed their welcome and are still around. No? Okay, then something similar. Take these elements and frame it as a revenge movie à la Deathwish. Okay, then have every single character on acid throughout the film and get Nicolas Cage to star as Nicolas Cage.’ I wouldn’t be surprised if LSD was passed around the room after. Or maybe before.

It’s as crazy as it sounds and I’m still reeling from it. What is perhaps most impressive about Mandy is it knows exactly what it is, even if the audience doesn’t. It plays with our expectations, giving a nice balance of clichés that cater to fans of the genre – whatever that genre is – and fresh shocks that can’t be likened to anything I’ve seen before.

Central to the film’s success is Nicolas Cage. Cosmatos, unlike so many directors of late, knows exactly how to use Cage. The script allows him to do what he does best: go crazy. A standout sequence involves Cage standing in his underpants in a retro bathroom, having a nervous breakdown whilst downing a bottle of vodka. I’ve never seen anything so Nicolas Cage and I loved it.

Mandy isn’t for everyone. It’s very violent and very weird. It’s also very slow. The first half is glacial, in fact. Looking back, I can’t recall the first half as readily as the second, and yet I do remember my friend turning to me twenty minutes in and whispering, ‘This is awesome’. I agreed. It was like being in a trance. The second half then turns up the insanity to eleven.

However, something tells me a second viewing won’t pack quite the punch the first did; the element of surprise will be lost. Overall, whilst I believe it will become a memorable Nicolas Cage film amongst his fans, it will most likely slip into obscurity quite quickly. A few snippets may find their way online and perhaps they will go viral. But the film as a whole is likely too slow and too weird to enter popular culture. For now, we’re stuck with ‘Not the bees!’ as Cage’s most memorable moment.

PrevPreviousNetflix’s “The Night Comes for Us” makes “John Wick” look like “Mamma Mia”
NextRemembering The Real-Life Superhero: Stan Lee (1922-2018)Next
On Key