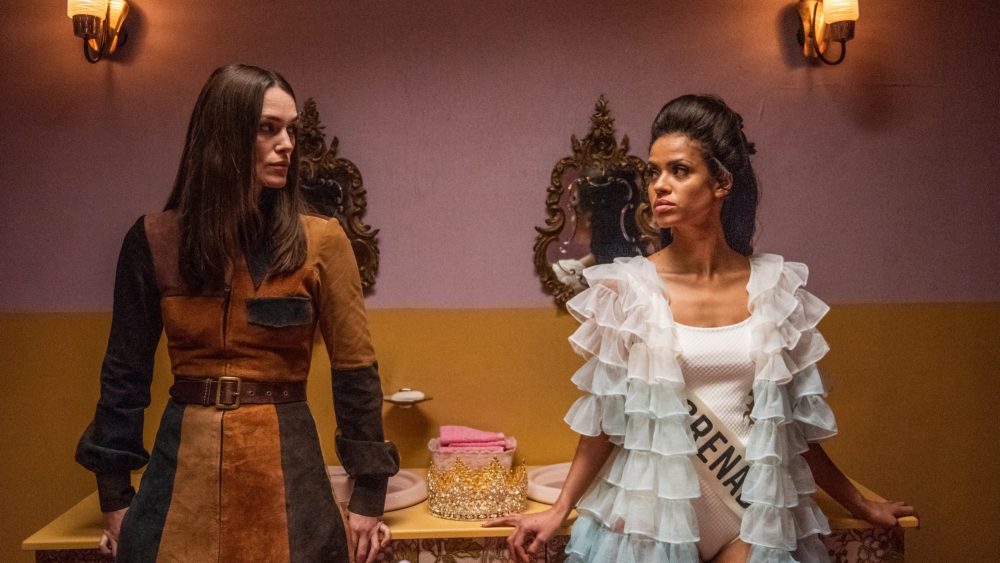 Having been lucky (or stupid) enough to visit the cinema at the last-minute before their nationwide shutdown, I was able to watch Philippa Lowthrope’s latest film Misbehaviour. A film aptly categorised as a comedy-drama, performing superbly as both.

The premise of this film is the 1970s Miss World competition, when a woman of colour was crowned for the first time in history. This momentous occasion was the most viewed event on television at the time, with over 100 million viewers. It simultaneously acted as a platform for a feminist group to bring down the patriarchy in front of the whole world. Rather a lot, I know.

The film is divided into two plots. The first follows the winner in question – Jennifer Hosten/Miss Grenada (Gugu Mbatha-Raw), who won over media favourite, Miss Sweden. Miss Grenada’s victory was truly inspirational and stimulated changing standards of beauty and acceptance. Her time in London is a brief glimpse into the hardship that ‘diverse’ competitors undergo, to the point where winning is sadly not an idea even entertained. Competitors such as Miss America are shown to be far more skilled at playing the game by flirting with journalists, gaining attention through clumsy acts, or simply being blonde, thus making the film’s climax all the more satisfactory.

The awards second controversy was in the shape of runner-up Miss South Africa, Pearl Jansen, one of two women chosen to represent the nation during Apartheid. The decision to include both a black and white competitor from the rainbow nation was shown in the film to be a hasty last-minute decision by the organisers in the hopes of avoiding political controversy at the event. Indeed, it only served to highlight the horrific inequalities of a state where more than 70% of the population were treated as second-class citizens based on skin colour. Although the film remains optimistic in its message, it nonetheless shows the progress that was yet to be made.

The second plot line explores Kiera Knightley’s character, Sally Alexander, a well-educated single mother struggling to earn respect in the male-dominated world of academia. After impressing an all male-panel with her knowledge of history, she is admitted into the University College of London.

There she soon discovers that she has not been ‘given a seat at the table’ so much as given a ‘high chair’ at the table, This leads her to join the ‘radical’ feminist group, the Women’s Liberation Movement, headed by Jo Robinson (Jessie Buckley) which sabotages the Miss World awards. In a matter of minutes, the Western ideals of beauty and the oppressive patriarchy are turned on their head at the biggest celebration of western beauty standards.

The film’s main protagonists, Miss Grenada and Sally Alexander, briefly interact. Their shared understanding of the awards as simultaneously sexist and degrading to an entire gender, as well as being seen as an opportunity for representation and success in a white male-dominated society is the main crux of the film. This conflict does an excellent job of juxtapositioning the themes of gender and race against the patriarchy. Granted, your correspondent being a white male may not be the best authority on the subject of race and gender. It is for this reason that I encourage watching the film for a personal interpretation.

My only critiques are of the wardrobe and soundtrack departments who failed to truly recreate a 1970s atmosphere, by keeping hairstyles and clothes more fitting of a Camden vintage store in 2020, rather than 1970s working-class London. There was also a glaring lack of iconic 1970s music which would have made the period instantly recognisable. At times, It is easy to forget what year the film is taking place in. To anyone able to watch it as soon as it becomes available, I highly recommend it.