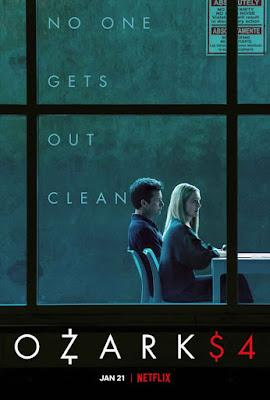 Picking up directly after the shocking finale of Season Three, Ozark Season Four Part One is a treat for lovers of suspense, excellent storytelling and striking cinematography.

Ozark’s quality is exemplified in the irony of its beautiful contradictions. These embolden the narrative with depth and intrigue that hooks the viewer into every episode. The best way to explore its brilliance is by indulging in the existential contradictions that saturate the narrative, the characters and the production.

Season Four’s opening deals with the fallout and the power vacuum that becomes apparent after the S3 finale. Characters that we believed to be untouchable and invincible are marred by tinges of vulnerability, uprooting our prior judgements regarding the power dynamics that we previously thought unshakeable. The writers are unafraid to subvert our expectations, defying everything we thought we knew, making it very difficult for the viewer to predict what comes next. This furthers the series’ trademark tone of suspense and distrust not only in the characters, but in the narrative itself, so that the story almost becomes a character in its own right; not to be trusted, but always respected and marvelled at.

The main marketing tagline for this season is ‘no one gets out clean’. The story revolves around the Byrd family, who – following the example of the father, Marty (played by Jason Bateman) – have become heavily involved in laundering money for the Navarro drug cartel, based in Mexico. The entire plot then is based on Byrd’s efforts to make illegally obtained drug money from the cartel appear legally obtained, through legitimate businesses. ‘Clean money’. This is where the irony begins. The Byrd’s cannot win the laundering game that they enter without playing dirty, lest they be gobbled up by the competition, who pull no punches in this season more than ever before. The Byrd’s stoop to new lows – in efforts to ‘get out clean’ from the whole rotten business – that we’d never have expected them to be capable of back in Season One. The processes involved in cleaning the cartel’s money and the consequences become increasingly messy, laden with deceit, contempt and fragile mortality. Poignant contradictions like these run through every vein and artery of the show, and they are what make the show great.

We are treated to a great increase in screentime for Omar Navarro (played by the excellent Felix Sollis) in this season, humanising a character who was extremely mysterious and seldom seen in previous seasons. Navarro reveals in the first episode his desire to live a quiet life, unplagued by the stresses and dangers associated with leading the largest heroin cartel in the Americas. The irony is powerful again here, and the contradiction only increases our intrigue. Of course, now that Navarro wants to be left alone, he finally becomes one of our true leading characters. Despite his increased prevalence in S4, Sollis’ performance and the excellent writing ensure that Navarro remains compelling, maintaining his intense air of unpredictability and uncertainty. We get to know Navarro much better than before, but this somehow makes him even harder to read and predict. You can never trust him, but sometimes you really want to. You may find yourself liking this morally bankrupt mass-murderer. That is a sign of a great villain, ringing notes akin to the likes of Gustavo Fring of ‘Breaking Bad’, one of the greatest TV villains of all time.

Another standout is the always brilliant Julia Garner as Ruth Langmore. Garner truly embodies the famous Shakespeare line ‘Though She Be But Little, She Is Fierce’ from A Midsummer Night’s dream. Garner skilfully embodies Langmore’s steely, hardened persona when interacting with other characters in the show, making it clear that she is extremely capable and not to be disrespected. This woman – described by one of the ensembles as “tiny” – is so fierce and strong, commanding your attention with every moment on screen. Langmore is arguably the toughest character in the show, despite physically appearing as the smallest and meekest. That said, Garner also shows incredible range in those moments where Ruth is alone or with loved ones, where she allows her emotions to be released after having to deal with more trauma and heartbreak than anyone should experience in a lifetime. Garner’s ability to portray the truth of the character’s outer mask and inner emotions make her performance unforgettable, and possibly the strongest in this show that is full of impeccable performances.

All this to say, if you haven’t seen Ozark Season 4 Part 1 – or any of the seasons – just watch it. This show is ‘Breaking Bad’ standard in terms of acting, story and production, and you’d be missing out if you didn’t at least give it a chance.

PrevPreviousSmall Island: A Fantastic Drama That Entertains Like a Sitcom ★★★★★
NextFlee ★★★★★Next
On Key