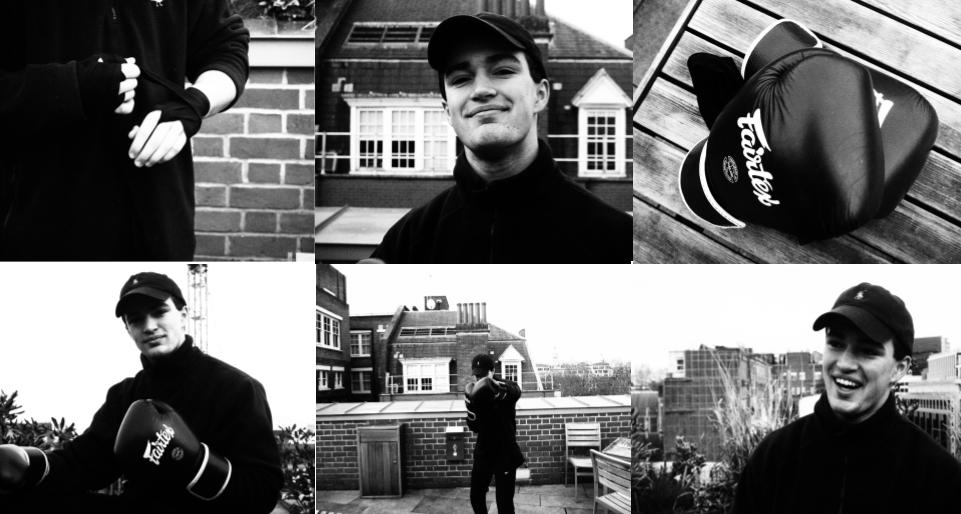 It is fair to say that Harry Barber has been missed on a Wednesday. It is equally fair to say that Harry has missed his Wednesdays. He is a lad who loves both his football and his FC and so it is hard to imagine something that could, albeit temporarily, pull him away from all of this. After a 45 minute chat with the second-year Law student, it became apparent that a deeply-embedded inner drive, an undying determination and a genuine fervour for combat sports has placed Harry where he currently stands. At no point since his training began has Harry shown any sign of faltering under the pressure; when we meet with him on the 6th floor of the Saw Swee Hock, he speaks fluidly and with the temperament of someone in control. Even as we get into the details of the fight, attempting to probe some trash talk, Harry remains humble and understanding.

It is rare in a sport so suffused with showmanship and inflated egos that you meet with someone so down to earth. When he speaks of his opponent, for whom he has a sincere admiration, it is neither condescending nor boastful. Rather, it is with an understanding that anything could happen—but the odds are in his favour. Harry has mentally formed a coalition of unwavering confidence and level-headedness, paving the way for an assured performance in the ring. As we take photos at the end of the interview, he does open the door to some histrionics – “He won’t see my red right hand coming.”

(H) I used to do martial arts when I was younger and was looking for a route back into fighting. This seemed like an excellent way to do it. It’s a good social thing as well. Meeting new people, getting to fight at York hall. It has just been a good experience so far. I’ve enjoyed it – it has helped my focus with uni stuff as well.

(L) A lot of people talk about boxing having such a positive mental effect.

(H) Yeah, well, I got concussed the other day which was less than ideal (laughs). But as an aggregate, it has had a good mental effect on me.

(S) Back to your opponent, obviously you don’t wanna give anything away but I remember you telling me that he’s planning to fight southpaw – what are your plans to combat that?

(H) If he gets southpaw right then fair play to the lad. If he can pull it off then that’s fine by me – I have a couple of ideas on how I can deal with that and from what I anticipate he’s gonna do. I think it should be a good fight. If he goes back to orthodox then that’s just what I’m used to. Everyone else I’ve been sparring has been fighting orthodox so that won’t be a problem. We can go hell for leather with that as well. I’m gonna focus on my own game. I know what I wanna do. At the same time, my plans incorporate what I think he’s gonna do, but if he changes it up on the night then I’ll be ready.

(S) So you wanna get to a point where no matter what he throws at you, you’ll have something in your locker?

(H) Yeah, yeah. There’s still stuff to work on and things to refine; I’m working on my defensive game a lot so I can work some quick combinations and move around the ring. If I do that and I get it right, then I’m pretty confident it will work regardless of what Julien does.

(S) At this point, what do you see as his weakness?

(H) I’d say fighting southpaw – it’s such a big threshold to reach. If he does it well, fair enough, but he’s had 8-9 weeks to secure a strong southpaw style which isn’t very long at all. It will come down to who throws the best punches and whoever’s quickest. A lot of the events will be people just going to war with each other – I hope to make it a bit more technical than that, but if that fails we’ll just go hell for leather and a southpaw stance isn’t made for that.

(L) Are you gonna knock him out?

(H) *laughing* I could go all big here and be the Dillian Whyte type of character who throws his weight around the room, but I’m not sure that’s my vibe. So we’ll have to see on the night. He won’t be knocking me out, I’ll put it that way.  I’ll either beat him on points or beat him with a knockout, one or the other.

(H) Julien’s had a few MMA fights – he’s a ‘grappler’ as he says. I don’t know if that’ll help him. Maybe it will, maybe it won’t. If he wishes to give me a little cuddle in the ring then perhaps it’ll help him out. Based on his punching I don’t think he’s done any fighting.

(L) Do you know what your walkout song’s gonna be?

(H) This is the hardest thing. I’m thinking maybe Don’t Look Back in Anger – that will bang and everyone can have a little sing-song. I floated a couple ideas to my housemates but they weren’t keen. The number of times I’ve said to Sophie Tofalides ‘can I change my song last-minute?’ is ridiculous – it might go right down to the wire to be honest. It might be Arabella by Arctic Monkeys. Julien’s going for Feed Them to Lions which is obviously such a big song. I hope for his sake that he gets it right on the night and that people get involved.

(L) I was wondering if you’ve felt the pressure at all?

(H) Not much. If it’s gonna come, it’ll come in the next couple of weeks. As we get closer, the pressure will build I’m sure. But, with boxing and with anything else for me, as long as I feel prepared, it doesn’t matter to me that much what happens. If I know I’ve prepared as best I can, the pressure won’t get to me. If I feel confident walking in and I’ve got my game plan sorted then I’ll be okay.

I told Coach Lewis I’d give him a shout out as well just to talk about what’s going on with LSE Boxing, and to be fair it has been excellent. He’s regimented us well and we’ve had some huge, huge turnouts – something like 80 people downstairs just for a normal boxing training session. That just shows the love for boxing in general and the fact that LSE has got a good base for it.

(S) I remember last year noticing how he was really working well with everyone. Working with every individual well.

(H) Yeah, he’s a lovely lad. When there’s been moments where I’ve been punched around, he puts his arm around me and tells me what I need to do to improve and tells me not to get too down-hearted. He’s very poignant in what he says. He doesn’t ever overload you with information.

(S) Is he important in your development, do you think?

(H) Yeah he has been. He recognises that I’m a driven person, that I’m there to stay, that I’m not gonna flake over time and that I’m gonna give it my all. Having that foundation has been really nice ‘cause every time we discuss something that kinda goes as an undercurrent – there’s an underlying assumption that he knows what I’m like and he knows what I’m trying to do. There’s a good relationship there.

(L) Do you think your opponent has a big ego?

(H) Maybe we’ve both got a bit of an ego. I think he likes to chat a lot of yeah. He’s a nice guy but he can have a mouth on him sometimes. But still more a nice guy than an egotistical guy I’d say. All being said he’s a lovely guy, we’ve got some mutual friends and it’ll be nice to be in the ring with someone I know doesn’t intend any genuine harm. There’s no malice there, no hurtful intentions. It’s just two guys going at each other for six minutes.

(S) Any words for the opponent?