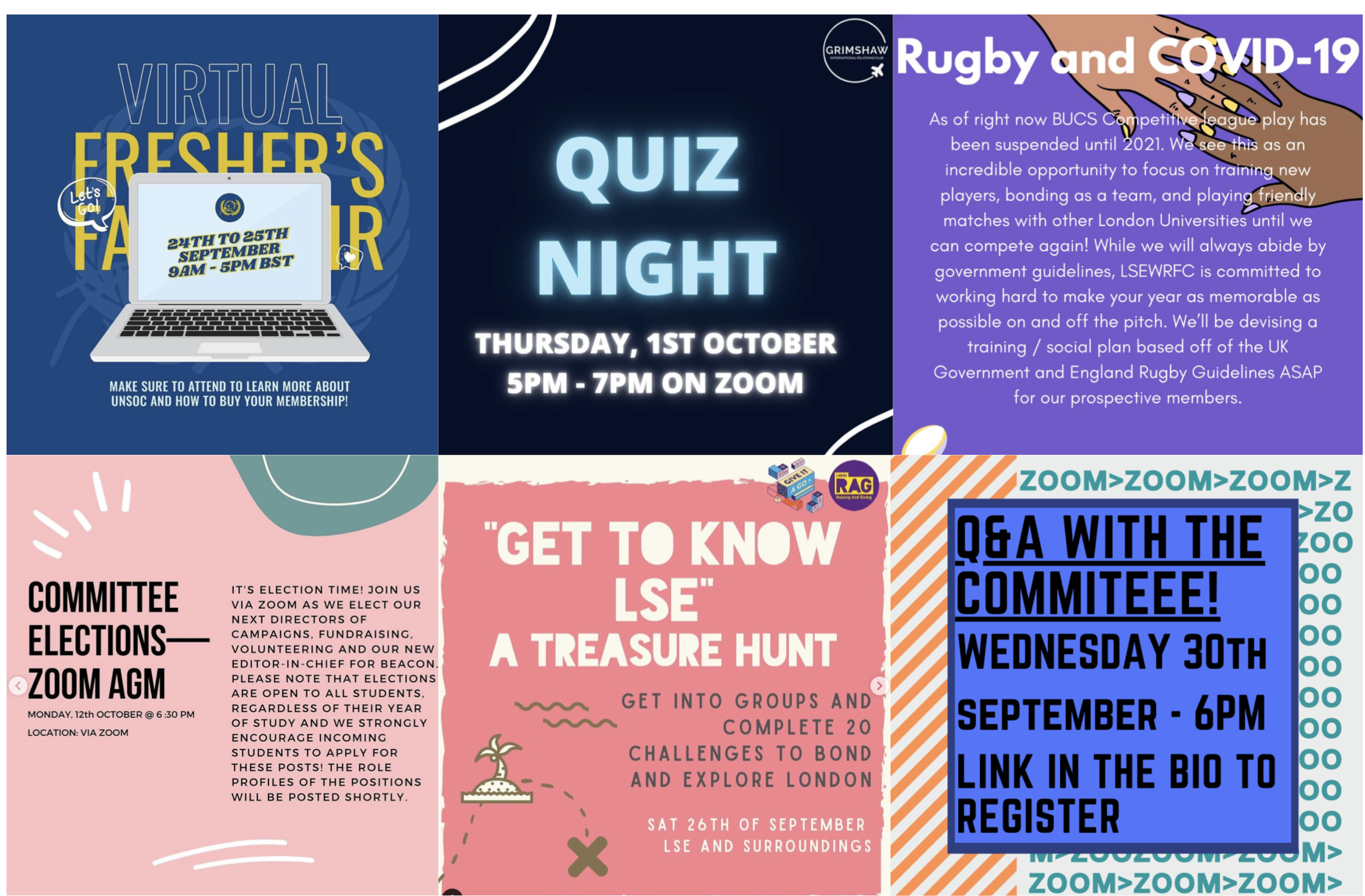 The new academic year is off to a very unconventional start. With lectures moving online and in-person classes taking place under strict social distancing measures, there are very little certainties to hold on to as the year begins. Student activities are being significantly impacted by the ongoing pandemic and are facing a whole new (and undoubtedly unprecedented) range of challenges. The Beaver spoke to heads of different societies to get a sense of how student communities are adjusting to the new reality.

Student societies are an essential part of university life. Run by dedicated students who work hard to offer their peers the vital university experiences-  the making of important friendships, athletic life, creative nourishment, or dozens of symposiums- committee work typically takes much commitment. However, this year students are reporting the workload to be far more intense.

Presidents of different societies started reaching out to freshers in early July because many incoming students had questions about what their first year at university would look like. While in previous years the Raising and Giving Society would sell RAG Bands providing access to nightly Freshers’ week events, this year the RAG Band was cancelled. RAG instead hosted Zoom calls to discuss anything LSE or London-related with new students throughout the summer and organised initiatives to attract freshers.

Other societies, like LSESU Amnesty International, were also extremely active, putting up campaigns such as the “Year Against Racial Discrimination” initiative, at a time in which student communities are usually quiet. As such, while societies continued to promote their work actively on social media, significant bureaucratic work was being done in the background.

The big question that haunts societies is whether to go fully online or implement a hybrid system, which blends online and in-person events. In trying to determine the best course of action, societies spent a considerable amount of time trying to understand new regulations and seeking guidance from the Student’s Union. Even though it is widely understood that the SU had to restructure its own operations in the space of  a few months and was responsive in the beginning of the summer, a “hot hot mess” ensued as September approached, as reported by an interviewee. Students disclosed that the SU took weeks to reply to emails and often provided vague responses. This seemed to be because the Student’s Union simply did not (and does not) have the answers themselves.

Consequently, students were alone in figuring out how to organise flagship events online or deciding whether to postpone some activities to Lent Term. This has required long committee meetings over Zoom and planning a range of back-ups in case the initial plan does not work. For many, uncertainty has been worse than finding out that everything will be online, as the lack of information and contradictory messages unnecessarily raised hopes of in-person events before new restrictions were announced. For example, despite having asked student societies whether they would be interested in booking the marquees  outside two of LSE’s main buildings, societies later found out that these spaces could only be used by departments after all.  As best explained by Poorvika Mehra, President of LSESU Amnesty International, “No one wants to be the society without in-person events if that ends up being possible.”

Sports and creative societies are facing their own unique struggles. Women’s Rugby reported  having lost 50% of the AU funding it usually receives, putting at risk many of its activities. Mariana Albuquerque, the President of Women’s Rugby, informed The Beaver that in-person activities are essential for their student community but that the SU’s advice was not very helpful – especially in relation to funding, with “Find Sponsors” being the only advice given. Meanwhile, Josie Stephens from the LSESU Drama Society informed us that risk assessment forms for Lent Term rehearsals and plays were already being prepared, since once in-person events are permitted, LSE rooms and venues are expected to be limited and booked in record times. This is leading some societies to consider booking non-LSE spaces for Lent Term events, which will require an extra investment societies do not usually have to make.

Despite all of this, these students are more committed than ever to making the best out of the current situation. People involved with societies choose to be because they care about these communities, which enriches their own experience at LSE. Freshers were not abandoned to figure out university life for themselves this year, rather quite the opposite. Regardless of the frustration and obstacles they are still facing, societies are more active than ever before and in constant communication with freshers. This may set a powerful precedent and ultimately improve students’ experiences for years to come.