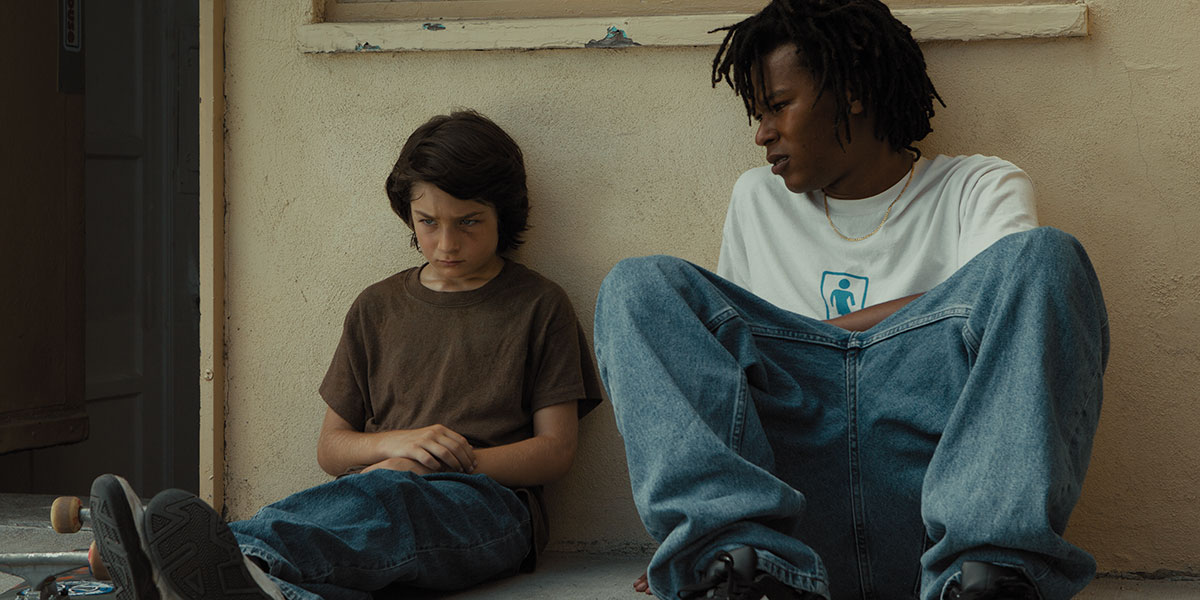 Skate Odyssey: “Mid90s” is a Journey through the Glories and Traumas of Boyhood

Much like Judd Apatow’s “Superbad” (2009) left an indelible imprint on the socially inept, sexually frustrated teenagers that served as its subject, the directorial debut of its essential star, Jonah Hill, could well be as important to the people it portrays: kids who skate.

“Mid90s” is a slick 84 minutes in length – which is all Hill needs to tell us engrossing, essential truths about its primary characters. Stevie (Sunny Suljic), a quiet but passionate student of the world around him, is oppressed at home by a dictatorial older brother (Lucas Hedges) and misunderstood by a mother (Katharine Waterston) whose lifestyle choices increasingly disturb his youthful perspective. When he sees other, older kids hanging out, skating – enjoying themselves – he leaps at the chance to join their crew.

But Stevie is also a likeable and courageous kid; he rises quickly up the social ranks, much to the horror of a longtime member who’d rather he learnt his place. These are teenage street kids, remember – children of the wilderness, lost boys. They run free from homes you wouldn’t want to spend much time in, to makeshift skate parks you wouldn’t want to spend much time away from.

It’s here, and in the local skate-shop, where the characters come alive – and where the film flourishes. In their marauding conversations about girls and culture, their pasts and futures, we learn more about these kids than any stock introduction or school report could possibly tell us. Hill, who also wrote the film, relays a true sense of how kids actually talk; their crude, hilarious “would-you-rathers” and genuinely meaningful insights alike. There are shades of “The Office UK” in the caustic humour and lucid mockumentary style that governs “Mid90s”.

These kids have very real impulses, too: terror, euphoria, self-punishment, self-preservation. Above all, confusion. Skating might save the boys from the streets, but it can’t save them from each other, or themselves.

Hill taps into the tightness imposed by these anarchic impulses. The aspect ratio is a squarish 4:3, at first glance a questionable choice, conferring an unwelcome claustrophobia on early, expansive scenes. But as the film goes on it begins to become clear: it’s not introversion we’re seeing but intimacy. Rooted deeply in the boys’ survival instincts, it’s an intimacy with beauty and resonance.

If that closeness is tendered visually, the score, written by Trent Reznor and Atticus Ross, whose music for “The Social Network” is among the finest American scores of the 21st century, shapes and illustrates that same mood with great effect. The soundtrack is perfectly chosen, bringing together the adolescent hip hop of the 90s with European stadium rock; it sounds like a mixtape for the coming-of-age of these kids. A little-known Morrissey track completes one of the best scenes of the year.

Running through the film is the sense that Jonah Hill was one of these kids. It’s the only explanation for how he makes it all look so easy.

PrevPrevious“Killing Eve”: Slay or be Slain
Next“Crazy Rich Asians”: rich in revenue, not in narrativeNext
On Key