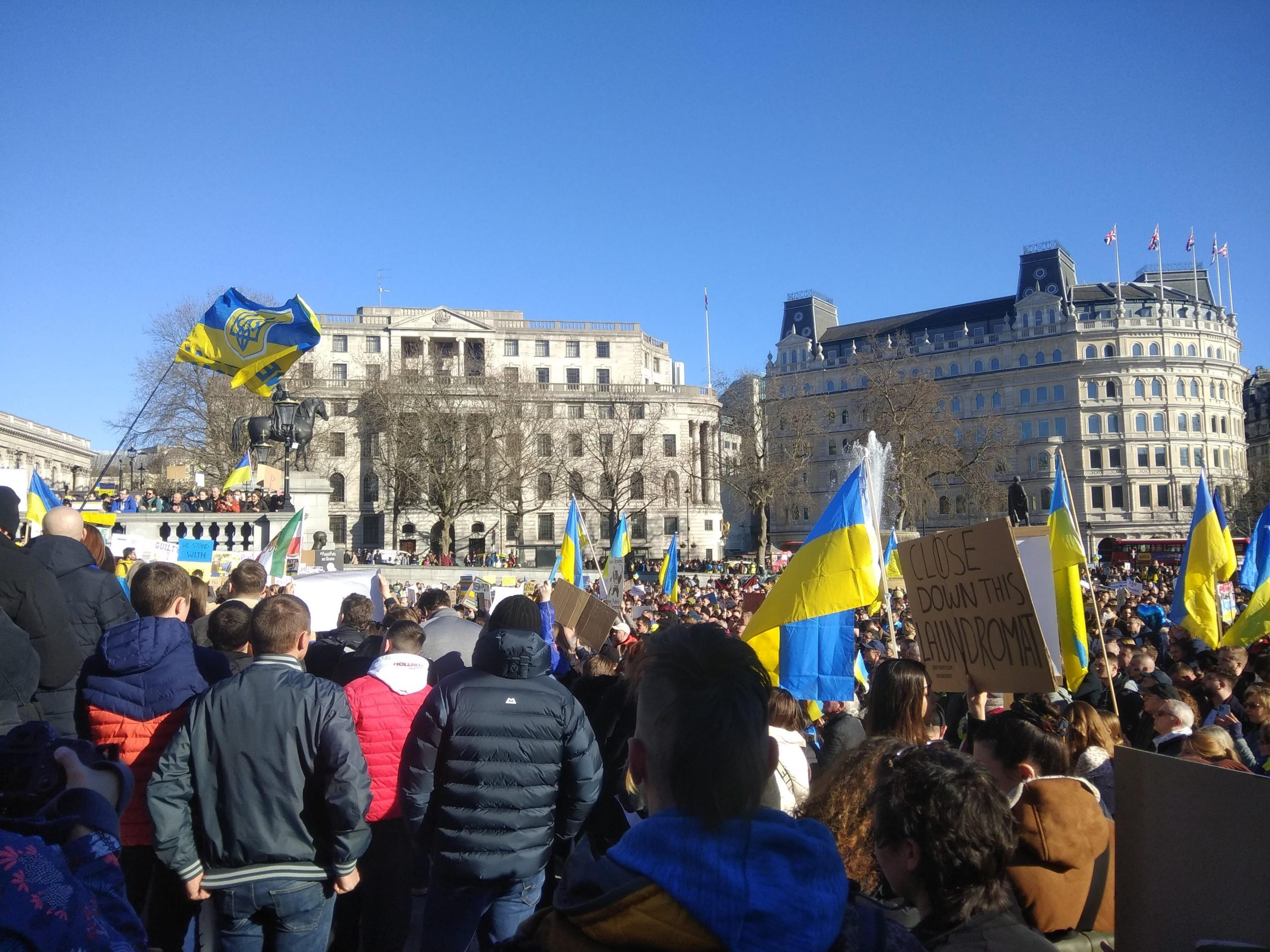 A groundswell of sympathy for Ukraine is picking up momentum as Russian attacks on the country continue unabated. Russian President Vladimir Putin put Russian nuclear forces on alert on Monday 28 February, further escalating the stakes in the invasion of neighbouring Ukraine. The Kremlin cited UK Foreign Secretary Liz Truss’s comments, supporting British soldiers who want to fight for Ukraine, as the reason for escalation, claiming it was an example of NATO’s “aggression”.

Also on Monday, Russian forces pummelled the Ukrainian city of Kharkiv by firing rockets from the sky killing at least 11 civilians and injuring many more. This comes just as Western countries agreed to cut off some Russian banks from the Swift international banking system.

This has meant that many Ukrainian civilians live under the threat of Russian bombs. “Every time our windows start to rattle, either because of the approaching bombers or explosions nearby, my family has to hide in the basement,” said Danylo Nikiforov, President of the LSESU Ukrainian Society. His family was unable to evacuate in time and are currently stuck in Kyiv. “The other day an attack helicopter hovered so close to our house that my father could see the pilot’s eyes behind the oxygen mask,” he said. “There is always a threat to loved ones and I wish [that] you [will] never experience this feeling in your life.”

The current war in Ukraine has been predicted by Western intelligence since late 2021 as Moscow massed more than 130,000 troops near its border with Ukraine and in Belarus. The likelihood of war surged on 21 February when Putin recognised the regions of Donetsk and Luhansk in eastern Ukraine, which are led by Moscow-backed militias, as independent states.

The assault on Ukraine began on Thursday 23 February as Russian troops poured into the country, swiftly advancing towards Kyiv. A UN Report on 28 February confirmed at least 376 civilian casualties, including 94 deaths, with the real toll likely to be much higher.

The invasion has been condemned widely across the West and beyond, with US President Joe Biden denouncing Russia’s “brutal assault on the people of Ukraine” and NATO Secretary General Jens Stoltenberg blaming Moscow for “shattering” the peace in Europe. UK Prime Minister Boris Johnson called Russia’s attack “hideous and barbaric” and announced fresh humanitarian aid to Ukraine worth £40 million on 26 February.

The conflict has also spurred Germany, which earlier froze the opening of the Nord Stream 2 Pipeline from Russia, to decide to raise its expenditure on defence to more than 2 percent of its GDP. “It’s important to base the investment on a clear assessment of what is needed and not just throw money at the problem without political direction,” said Florian Lenner, an MSc International Relations student from Germany.

The ongoing war has also sparked demonstrations across the world against the invasion. Protests erupted in cities including London, Paris, and Berlin, with participants carrying the gold and yellow Ukrainian national flag. Trafalgar Square in London was teeming with protesters over the weekend as they chanted slogans like “No to War”, “Arm Ukraine” and called on Britain to impose severe sanctions on Russia. There have been similar daily demonstrations since Wednesday 23 February.

“This is not about Ukraine anymore. This is about world peace!” one organiser asserted to loud cheers from the crowd. Many Russian nationals also participated in the demonstration, denouncing Putin’s military incursion, and carried posters that read “Putin does not equal Russia”.

“I wanted to express my support for the Ukrainian people. My country has experienced the same problem since 1992 when Russia supported Abkhazia separatists,” said Papuna Nozadze, an MSc International History student from Georgia. “In 2008, Russia directly invaded Georgia. Russian aggression is not unusual to me. It’s a flagrant violation of international law. It’s akin to Hitler’s invasion of Poland in 1939.”

Nozadze, like other protesters, expects the West to provide Ukraine with more arms. “Our society is trying to be as vocal as possible,” Nikiforov said. “We have attended every solidarity action in London and this week we will hold a vigil together with the Amnesty International Society to commemorate our fallen soldiers.”

The Ukrainian Society also plans to distribute an open letter seeking support from other LSE student societies. Nikiforov emphasised the difficulties faced by fellow Ukrainian students in conducting transactions because the “banking system is failing”. He stated, “The currency is depreciating and the government made it more difficult to transfer money abroad.” Overseas transfers have been made more complicated since the start of the war as there is a risk of money being laundered into Russia.

Nikiforov also lamented the mental distress many students from Ukraine face, including sleep deprivation and anxiety, and called on the School to provide more support in “these gruesome times”.

Other student societies have also chipped in with their efforts to express solidarity with Ukraine. The Polish Business Society helped create a list of reliable fundraising campaigns for people trying to support Ukrainian war efforts.

“It (the invasion) is being carried out in our name,” said Daria Mosolova, an MSc International Relations student from Russia, “and it is our duty to oppose it. There are no stringent democratic means to register your disagreement with the government in Russia and the only way to express your opposition is to protest.”

Mosolova has been participating in the protests in Trafalgar Square every day since the war started. She recognised that other Russians in the university and beyond may be hesitant to overtly express their opposition for fear of repercussions. “There might be prison sentences lasting 20 years,” she explained. “But everyone should do everything in their powers to help Ukraine.”