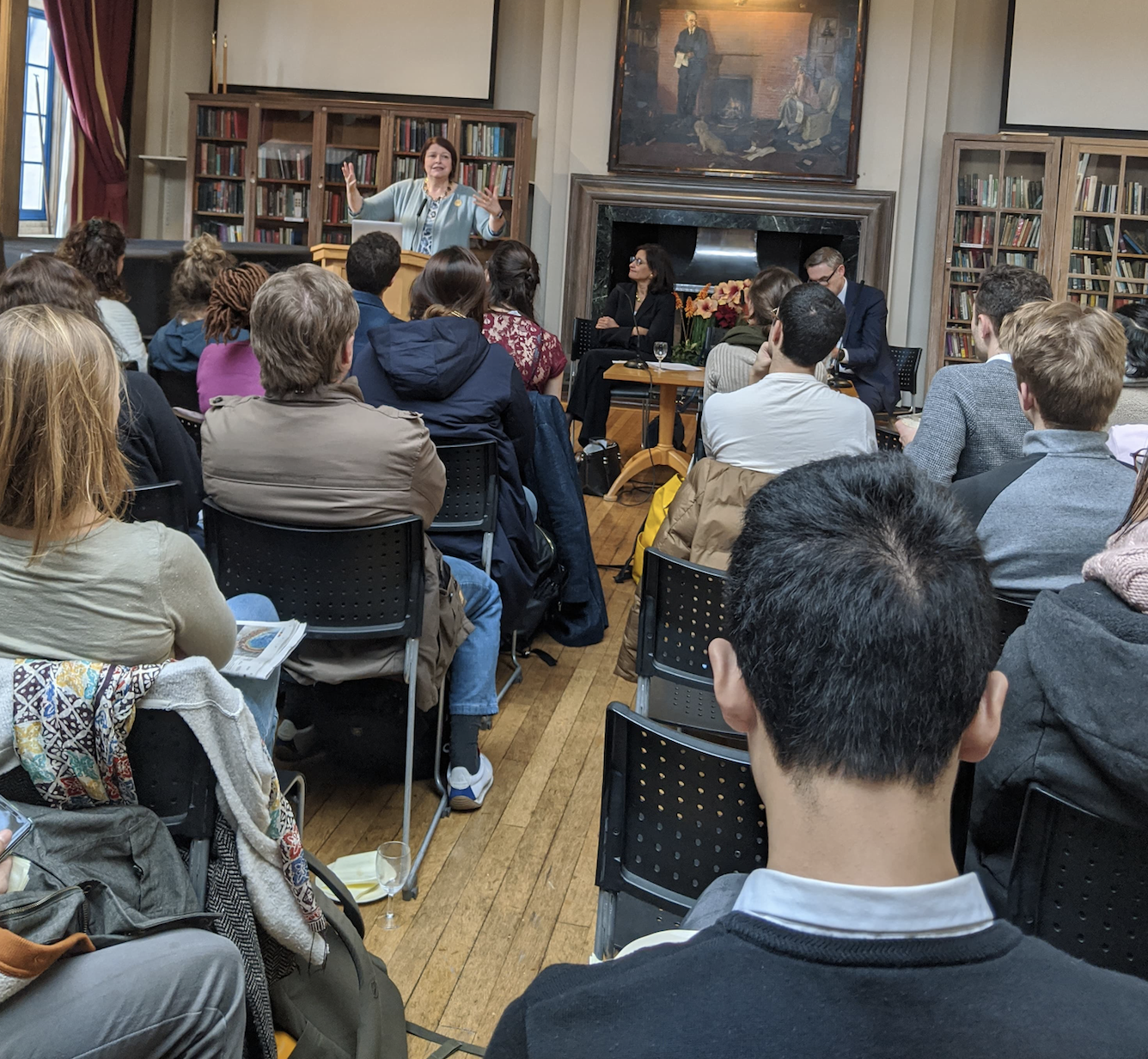 By Sophie Lamotte and Kevin Morris

On Tuesday February 11th, over a hundred students attended the LSE lunchtime Q&A meeting chaired by Pro-Director of Education Dilly Fung, Pro-Director of Research Simon Hix and LSE Director Minouche Shafik. Along with a cross section of undergraduate and postgraduate students in the audience were student activists involved in a variety of advocacy campaigns on campus, including Climate Emergency Collective, Justice for LSE Cleaners, and Hands Off LSE amongst others. Many in attendance used the LSE town hall meeting to voice their concerns and demand improvements on specific issues ranging from sustainability to rising Sinophobia.

Director Shafik began the meeting with an acknowledgement of the importance of communication with the student body, noting many of the major areas in which the university is working to address problems in response to student issues. She touched on hot button issues such as reducing waste and coronavirus concerns. She noted that the university’s efforts towards enhanced engagement with the student community is showing positive results, citing the improved National Student Survey scores LSE received last year.

Pro-Director Hix and Pro-Director Fung followed with a brief discussion of LSE’s expanded opportunities for student research and publishing as well as increased investment in mental health resources and strategies. In addition to a discussion of the new LSE Change Makers programme, which provides students the opportunity to improve campus life through independent research, the directors also announced the roll out of new ventures for LSE students, including increased resources for tech and data science skill building, an LSE Research Exchange modeled after MIT’s programme, and a scheme to provide increased study abroad and internship opportunities called LSE Futures that will launch in June.

After these introductory statements, Director Shafik opened the floor for students to voice their questions and concerns directly to the directors. As the discussion moved from topic to topic, a pattern became evident in most of the directors’ responses: the situation now is better than it was before, but there is still room for improvement.

Some of the major topics included decolonizing LSE and increasing the diversity of faculty and staff members. Other concerns touched on the ways that handwritten exam formats created unequal testing conditions for international and non-native English-speaking students. Here the panel pointed to supporting a wide array of assessment formats as well as the increasing use of digital exams. They acknowledged the need to hire more staff from Africa, Middle East and Latin America in particular, which is representation that the school is lagging on. The panel stated that they hoped to continue hiring more junior-level faculty and PhDs, noting however the difficulty in reaching these demographics in job announcements. They also acknowledged that there is a need for decolonizing curriculum but that this took time and LSE was working on an ‘Inclusive Education Access Plan’ to reduce the differential in achievements between international and English students.

In the area of mental health, one student addressed the issue of graduating students being put under pressure to enter the workplace and spoke to LSE being too “career driven”–particularly for certain career fields such as finance and investment banking. In answer to this concern, Pro-Director Fung noted that a new Director of the Careers department was hired recently who prioritized this issue. This seems like a novel and pro-active atttitude on the part of LSE to converge Carrers and Mental Health services.

Some students used the opportunity to express anger and frustration with institutional problems or bigoted attitudes on campus. Two vexed students revising for their exam resits asked why the university was slow to move in restoring the Moodle Archive, which had inexplicably removed several years worth of past course materials from the website. A clearly distressed representative of the Chinese community on campus inquired about the lack of response to an email sent to the Director’s office detailing increasingly Sinophobic behavior on campus. In both instances, the director’s promised immediate action on the part of the university to resolve and respond to these problems.

Another issue raised was consent training on campus as well as improving the assistance LSE provides to sexual assault survivors, especially in the area of reporting assualt. LSE offers many routes for students who wish to report sexual assault, including talking to faculty members, using anonymous avenues, speaking with residence hall staff and reaching out to mental health services. Student activists contended that the multiplicity of reporting options created confusion for students who often find themselves shuffled between different entities and needing to reiterate their trauma to individuals that don’t necessarily communicate among themselves or are even appropriately trained, resulting in a situation unconducive to the students’ wellbeing. The directors responded that they took this issue very seriously and committed to modifying this mechanism. They stated that the multiple avenues for reporting served to increase options for students needing to report sexual assault in a way that’s best for them but promised to work on clarifying the reporting options and the reporting process to reduce confusion for survivors.

When asked about the differential treatment in LSE cleaner’s working conditions, Director Shafik said that LSE is one of the first universities to switch from hiring cleaners from a private company to taking them under LSE employment and that in the last two years 400 people were hired by the school directly. She failed to mention that this was the result of extensive student activism and coverage in the national press and by this paper. When questioned, she disputed the credibility of The Beaver and the veracity of its recent reporting on the issue, and announced that her office would release a response to The Beaver.

Throughout the Q&A session, the directors encouraged students to voice their concerns to the LSE administration through the many channels available, repeatedly asking that students participate in the LSE Student Union, Student-Staff Liaison Committees, and forums the administration holds with the LSESU. The questions that the directors received indicated nonetheless that some students feel that current mechanisms are more geared towards individual academic inquiries and students’ experiences at LSE, not necessarily for engaging with certain types of student activism or fundamentally changing the ways in which LSE is operating as an institution.