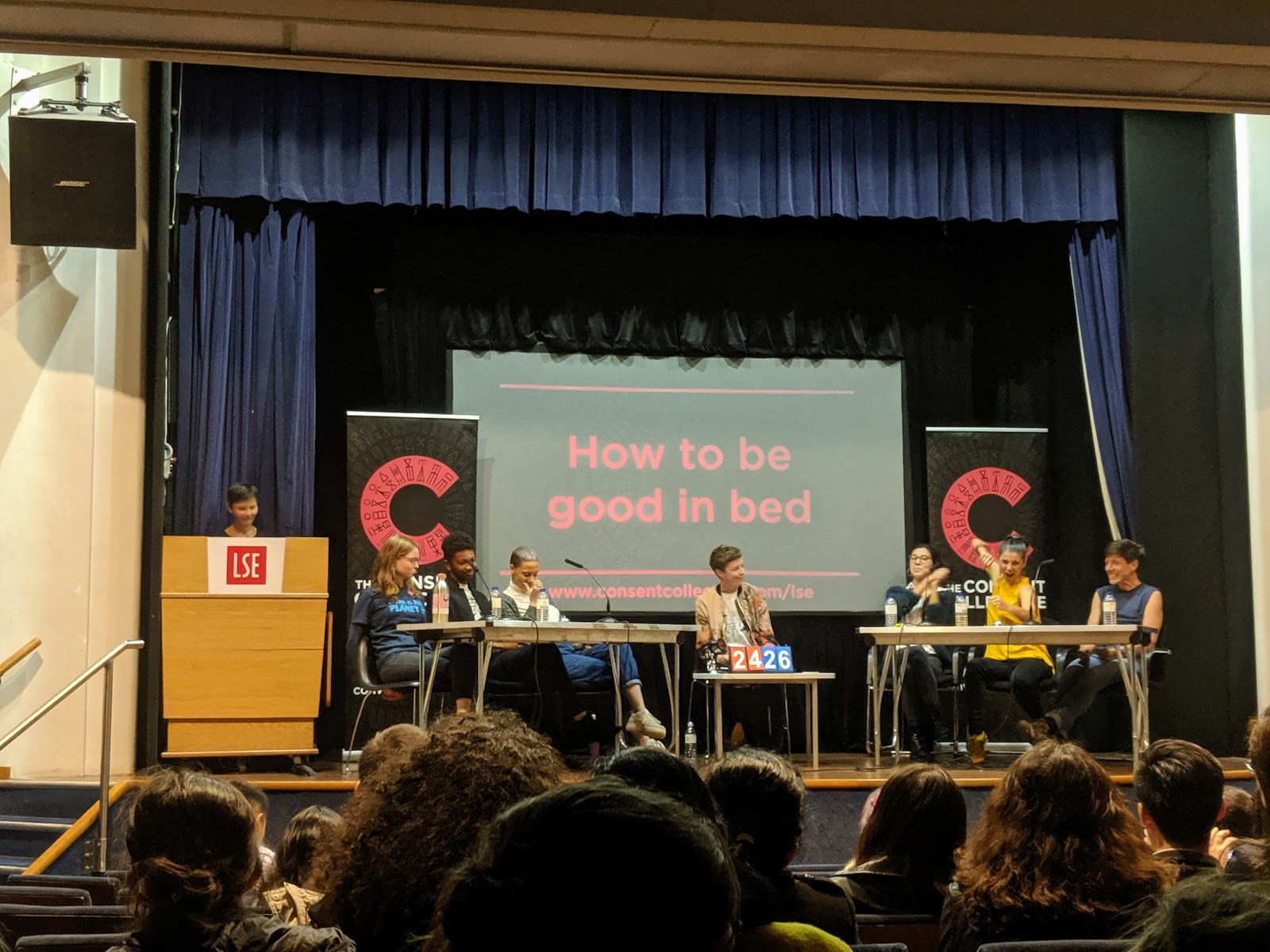 The Consent Collective teaches LSE ‘How to be good in bed!’

On 23 and 26 September, the Old Theatre was filled with laughter, overt innuendos, and interrupting sound effects. Shockingly this was not Alan Manning’s EC100 lecture, it was the Consent Collective’s flagship game show, ‘How to be good in bed.’

Onstage were two teams of three players each. Star players included Dr Meg-John Barker, a professor of Psychology and author, who never ceased dealing the event cards of expertise, as well as LSE’s current Environment and Ethics Officer, Saskia Straub.  She shared reflections and thoughts from personal experience. Refereeing the activities was the Consent Collective’s co-founder, Dr Nina Burrows, a psychologist, author, and educator on issues of sexual abuse. Cynthia Ellies, another Collective co-founder, completed the setup, marshalling a myriad of flashing visuals and sound effects to keep the audience chuckling throughout.

The event was broken into various rounds, from ‘Shoulda, Woulda, Coulda,’ in which players lamented times they wish they had acted differently, to ‘Myth Busters’, where common misconceptions were debunked and laid bare. Play was punctuated with buzzer sounds as players vied to gain points by catching others in unintentional innuendos.

A focal round was ‘Sex (Re)Education’. Stories of sex-ed classes with chicken tikka masala flavoured condoms gave way to descriptions sex ed taught side by side with drug awareness by priests sporting bags of contraceptives and fake heroin needles. The audience responded keenly to these shifts from humor to reflection.  Saskia concluded the stream of mostly-negative sex-education stories by describing the full week of classes taught by medical students that German public schools provide, while the other players looked on in awe.

Some of the more serious nuggets of meditation came in the ‘Advice’ and ‘Myth Busters’ rounds. Imogene Butler-Cole, a facilitator, activist, and player, shared her experience of realising, many years after an encounter, that what had occurred was sexual assault. This long period before recognition, she said, was in part due to society’s prescription of a particular story of what sexual assault is. In reality, sexual assault often looks quite different from the violent picture many people imagine.

Meg-John also raised a point of importance about relationships. They asserted the need for people to have ‘open windows’ on romantic relationships, allowing friends and family to act as a check to make sure relationships do not become controlling and coercive. To end the evening Dr Burrows gave an emphatic plea for audience members to avoid intellectualising what they had heard. Instead, she asked the audience to go out and act on the ideas that had been shared, making them a part of their daily lives.

The Consent Collective, which has only existed for a year, has quickly gained prominence providing a useful service for universities, music festivals, and more. The two game-show nights were commissioned by the LSE, and this year the university has paid for all students to access the member’s area of the Consent Collective website. It provides advice, videos, and resources to support yourself or others, and can be accessed here. The LSE audience’ sizeable appetite for consent education is evident from the popularity of the Consent Collective’s event. We shall see if the School administration rises to the occasion.