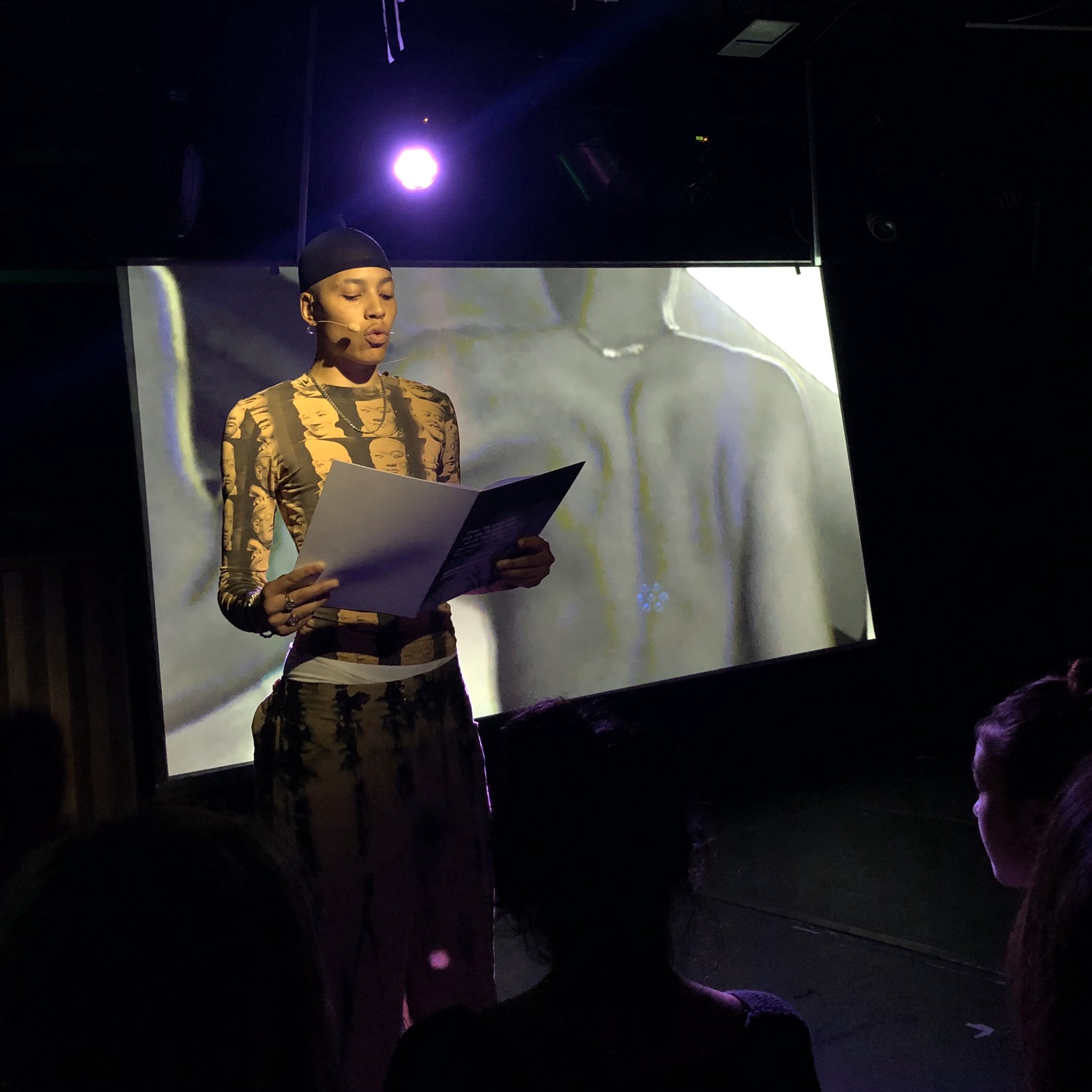 The Freedom of the Nightclub: Art and Politics at DRAF’s Annual Evening of Performances

Kai Isaiah Jamal performing “Snap my legs and ask me to crip walk. All of the times I’m dancing/dying for you”, 2019, Courtesy: DRAF Art/Twitter

On 3 October 2019, Ministry of Sound played host to something well outside its usual fare. While the pulsating thrum of techno and grime could be heard down the street, the London superclub became a gallery, the site for this year’s Annual Evening of Performances, a performance art event by the David Roberts Art Foundation (DRAF). Invited guest curator Louise O’Kelly – founder and curator of the London performance art festival Block Universe – had DRAF eschewing convention in multiple ways, celebrating the diversity and radical experimentation that is ongoing in London’s fascinating performance art scene.

The choice to host a performance art event in a nightclub is not new but, curatorially, O’Kelly has responded to the space in an engaged way, highlighting the important role nightclubs play as spaces for freedom of expression for women, working-class people, the LGBTQ+ community, and people of colour. It is no coincidence that in our modern conservative times there has been increased restriction of London’s nightlife and, in particular, the spaces that provide such freedom and opportunity for London’s many burgeoning artists that may fall into these categories.

O’Kelly, writing for thisistomorrow, discusses her choice of venue and explains that she “…felt it was important to highlight the necessity of these spaces as an important meeting ground and wellspring for creativity, radicalism, and uncensored self-expression.”

Having championed performance art like DRAF in London for years, O’Kelly is no stranger to this kind of curation. She has helped provide a platform for a number of queer artists and artists of colour that have previously operated in a nightclub context, including Victoria Sin, Nkisi, and Last Yearz Interesting Negro/Jamila Johnson-Small, all of whom have performed in iterations of O’Kelly’s festival Block Universe.

The line-up of artists presented by O’Kelly and DRAF is no different, featuring a diverse array of performers whose work is leant an engaging and fascinating edge in a nightclub context. Kai Isaiah-Jamal, in a transfixing spoken word performance Snap My Legs and Ask Me to Crip Walk – All of the Times I’m Dancing/I’m Dying For You, uses queer nightlife subculture as a thematic device for a personal exploration of the difficulties experienced by trans people of colour. He both reflects on and responds to a tendency for conversations in a club to focus on the behaviours and aesthetics of the club itself, but uses this language in a way that reaffirms the importance of the club as a place for free expression.

As Isaiah-Jamal reads “when a black boy vogues it is a revelation, we feel the respect and reverence that he feels for the club as a safe space, where queer people are able to shape their own realities outside of the context of heteronormative ‘realness’.” It is demonstrative of the deep significance the club has for London’s marginalised artists.

We move to the bar area, where Jimmy Robert begins unwrapping and thanklessly pushing a section of gallery wall seemingly taken straight out of the ongoing Frieze Art Fair. Inside the corner slab is a photograph by feminist artist Valie Export. Some in the crowd seem to not understand that Robert’s performance Old Masters is actually taking place: the hard thump of techno begins and Robert sits, strokes, poses, and partially undresses in front of the photograph. It is a short, fascinating performance that brings up interesting questions of spectatorship in art and gallery politics. Performing in a nightclub disrupts the stuffy, bureaucratic atmosphere that Frieze is infamous for, and encourages a revealing intimacy in the way we view and enjoy art. It seems to encourage an enjoyment of art that is more akin to the experience of clubbing, rather than a sober glazing over of static images on white walls.

Returning to the main performance space, we are greeted with signs that read “NO TRAINERS, NO TRACKSUITS”, an all too familiar sight, a bit of subtle social engineering typical of bourgeois London nightspots. The signs stand in keen contrast to the shamelessly proletarian rhythms of The Streets playing above us. It’s all part of Hannah Perry’s Smoking Area, a scripted piece that combines a voiceover examining working-class British masculinity, smoke and installation elements, and a dance performance that tests the limits of performer Lewis Walker.

The class politics explored by Perry are an uncomfortable topic for many in nightlife: it’s an industry that is by nature an indulgence, and not traditionally friendly to those that do not fit the fantastical image of glamorous utopia that clubbers often seek. But in an age where boiler suits, New Balance trainers, and Fila tracksuits are stock-standard DnB-night clubwear, Perry and her collaborators imagine a nightlife of inclusivity and liberation, where traditional class signifiers are worn with pride and free of judgement, not as costumes by wealthy punters.

The evening ends with a multimodal collaboration by artists Haroon Mirza and Jack Jelfs, DJ and grime pioneer Elijah, and rapper GAIKA, under the moniker The Wave Epoch. The group presented a new iteration of their piece Last Dance, an exploration of technology and spirituality devised during a residency at CERN’s Large Hadron Collider. It was previously shown at Brighton Festival, and takes on fascinating new dimensions in a club space. Last Dance’s vision of technological mysticism in a distant age is in many ways related to the themes in club music: an emphasis on the transcendental effects of the lights, beats, and freedoms a club provides. The ecstatic experience of raving takes physical shape as GAIKA performs like a kind of grime shaman. As the performance continues and audience members dance themselves away, we find our egos dissolving in the presence of the scientific rave gods. It is a vision of a club culture that is liberating and revelatory, and the perfect thematic end to the evening’s performances.

Heading out of Ministry, I don’t find myself feeling the typical calm and erudite sensation of having been in a gallery all evening, but instead the worn-out ecstasy of coming out of a sweaty club after four hours. O’Kelly and the artists she has assembled have responded dynamically to their location. This year’s Annual Evening of Performances celebrates the club as a legitimate space both for performance and for the making of art, and presents a vision of young art in London that feels closely tied to its community. It acknowledges how nightclub aesthetics can allow for the sincere expression of self, and the art world’s performance and postulating erode as we embrace the hedonistic liberation of clubbing.

On 3 October 2019, Ministry of Sound played host to something well outside its usual fare. While the pulsating thrum of techno and grime could be heard down the street, the London superclub became a gallery, the site for this year’s Annual Evening of Performances, a performance art event by the David Roberts Art Foundation (DRAF).