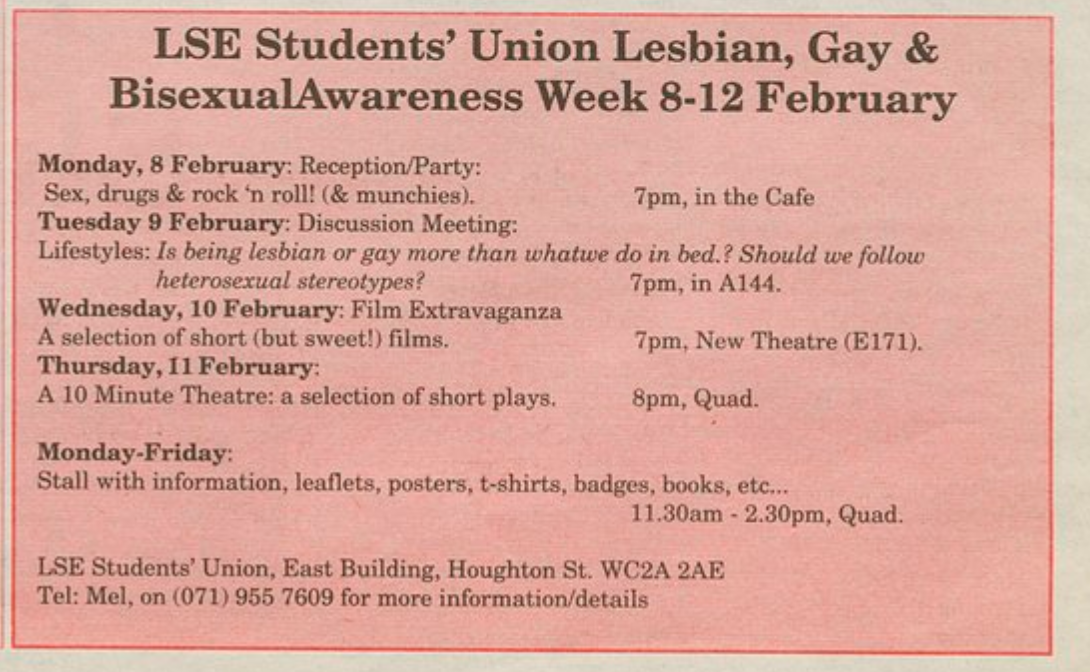 Pride brings together lesbian, gay, bisexual, trans, queer, intersex and asexual groups with allies in ‘uneasy alliances’. It is a diverse parade, a social institution, an LGBT+ awareness month (or week), and the name of our SU group. Pride is commercial and political, festive and rebellious, and normalising and confrontational. This week is a dedicated week to raise awareness of LGBT+ issues, a tradition we have followed for at least 30 years at LSE. And with 2020 around the corner, it will be 50 years since the world’s first Pride parade.  LSE in particular has been a surprisingly instrumental site for LGBT+ activism.

The infamous 1969 Stonewall Uprising in New York is commonly thought to have sparked the Pride movement. Tired of police harassment, queer people fought back during a routine raid at the Stonewall Inn, which led to a three-day rebellion. We don’t know who “threw the first brick”, but queer people of colour, including Stormé DeLarverie, Miss Major, Sylvia Rivera and Marsha P Johnson, were pivotal. Because the protest is remembered as a watershed moment in political mobilisation, other key events in LGBT+ history are often overlooked.

UK Pride-inspired events followed shortly after North American ones in the early 70s, including the first UK Pride parade. A key site for the beginnings of Pride-style activism was campus turf. Inspired by New York City gay liberation politics, second-year Sociology student Bob Mellors set up a meeting on 13th October 1970 in the basement of the LSE Clare Market building to gather like-minded students. Whether the venue was an intentional choice or not, it was a fitting location. Clare Market had a long queer history, being home to the equivalent of a gay bar (a ‘mollies’ club) as early as 1794. The Beaver published an article written by an anonymous student covering the group’s first meeting, which was the founding moment of the UK Gay Liberation Front.

By 1971, their weekly meetings each attracted 200-300 people, and the group famously carried out ‘Operation Rupert’. Playing on the gay tradition of ‘camp’ performance, the group considered activism as theatre. Operation Rupert was a protest against the homophobic, anti-reproductive rights Christian event the Festival of Light. Protesters invaded the event, spontaneously kissing, releasing mice, blaring horns, and sprawling banners with pro-LGBT messaging. By 1974, the group disbanded due to internal disagreements. However, they had effectively increased visibility through their provocative acts of civil disobedience.

Years later,  the LSE Lesbian and Gay Society wanted to commemorate the 20th anniversary of the UK Gay Liberation Front. Even though they did not request funding, they were met with pushback from university figureheads.  LSE Director Indraprasad Patel rejected persistent efforts and pleas for a commemorative plaque to be erected, describing the issue as contentious and incidental. This led to the beginnings of LSESU Pride Week itself through petitioning and awareness-raising events. The Lesbian and Gay society organised a Pink Plaque week in November 1989, including events with the Law Society and Labour Club, a screening of My Beautiful Laundrette depicting queer love between a brown and white British man, an event on the social construction of sexuality, and a disco. All events were open to everyone. Following its success, the Lesbian and Gay Society repeated the series of events the following year, renaming it Lesbian and Gay Awareness week.

The university never got fully on board with plans for the plaque. However,  in October 1991 the SU unveiled a pink commemorative plaque to recognise Bob Mellors for his contributions. His unpublished biography and working papers are now available in LSE Women’s Library in the Hall-Carpenter Archives.

At some point, the week-long event became Lesbian, Gay and Bisexual Awareness Week. This dates back to at least the early 90s, according to a programme of events published in a 1993 issue of The Beaver. The name change reflected increasing inclusivity of those who don’t fit the (false) lesbian/gay binary. Keen to have a voice on a larger platform, queer students proposed a new student officer role in the LSESU. In 1994, ’N Daeron’ wrote in The Beaver that the Lesbian, Gay and Bisexual Society’s motion to create an LGB SU officer was “defeated by straight, white men”. Struggles to establish the role continued. Meanwhile, activists began to officially incorporate transgender people as part of the community label from the 90s, by using the term ‘LGBT’. However, it was not until the early 2000s when the society renamed itself the LSESU LGBT Society and changed the Lesbian, Gay and Bisexual Awareness Week to LGBT Awareness Week. Unfortunately, it was only at this time that the SU finally introduced a part-time LGB SU officer role.

2009 was officially the first time the awareness week was called Pride Week, which it remains today. While this technically makes ten years of Pride Week, ten years doesn’t reflect the true length of its history.

Having first registered as an undergrad in 2012, I am now an LSE veteran or – as some lovingly call me – an LSE Daddy. I have personally witnessed many of the name changes of the society. When I joined, we were still the LGBT Society, but a motion passed to change LGBT to ‘LGBT+’ to reflect the growing number of identities included in the community.

In 2016, a year after I first graduated, the society considered a name change again. As the general movement outside the LSE became more inclusive, the initialism became comically long — expanding to LGBTTQQIAAP (lesbian, gay, bisexual, transgender, transsexual, queer, questioning, intersex, asexual, ally, pansexual). But even this was criticised for leaving some people out.

The society president Alexander Spalding wanted to rebrand: “I campaigned for a name change because I wanted the society to move away from restrictively compartmentalising (and quite frankly heavily ethnocentric) constructions of gender and sexuality.” Society members approved his motion to scrap the initialism altogether, in favour of ‘Pride: Gender and Sexual Diversity Alliance’.

When I returned, like other students, I was baffled by the lengthy title. Gender and sexual diversity. Isn’t everyone included with this term? Alliances are often uneasy, but I think it’s crucial that the historically marginalised are put first by using language they identify with.

I wasn’t opposed to the term Pride. But I was also aware that the project of Pride is not relatable to everyone. Many outside the North American/European bubble did not share its history. The Pride project is also synonymous with ‘coming out’, collectively showing that queer people are everywhere. Mainstream society places a burden on queer people, who are often discomforted by restrictive behavioural norms and the presumption of heterosexuality. But equally, I don’t think we should add to that discomfort by making queer people feel obliged to come out.

Inspired by the academic and everyday reclamation of ‘queer’, I suggested ‘Queer Society’. In the end, it was put to a vote. With a razor-sharp margin, an abridged version of the name ‘Pride Alliance’ won.

Instead of feeling disappointed about who may or may not be included, I focused on the work I could do as Secretary. Our annual drag show became dedicated to queer drag artists of colour across the country. Along with the help of the alliance’s queer person of colour officer, I set up a coalition of more than 20 university groups, bringing together hundreds of students of colour across London.

The reality is that there aren’t any ‘perfect’ terms. In-vogue terms are based on language currently used, as well as what we have collectively learned. But any new terms we create don’t exist separately to original terms. Does this mean we should give up trying? As a sociologist studying categories and labels, I would say no. It’s always useful to be attentive to what baggage a term has, but also not endlessly bicker for the ‘best’.

I remember attending my first meeting in 2013 and seeing a sea of white faces in an awkwardly disordered room. Six years later, and to the best of my knowledge, we’ve elected the most racially diverse committee in history. And I like to think we have a good balance of celebrating every ‘Thursgay’ to the fullest, and continuing the good fight.