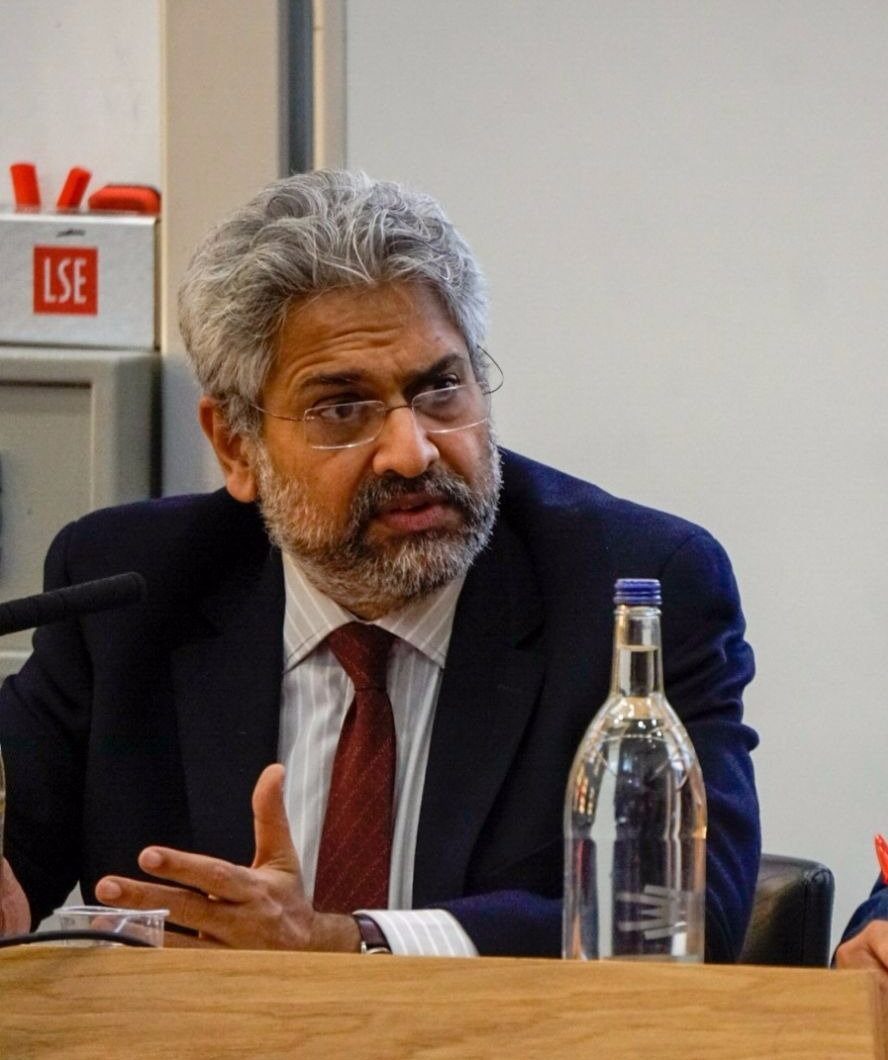 A Conversation on Indian Media: Interview with Siddharth Varadarajan

Bhadra Sreejith sits down with Siddharth Varadarajan, Founding Editor of The Wire, to discuss fake news, online advertising, and the Indian media industry.

In 2015, the Delhi-based former professor founded The Wire, an independent news website with 3.5 million unique viewers a month. It is one of the more popular recently-set up media platforms that aim to challenge the dominance of traditional Indian media houses backed by corporate interests. In an event organised by the LSE South Asia Centre, Siddharth Varadarajan spoke on “Challenges to Press Freedom in a Democracy”. The Beaver sat down with him to discuss his memories of LSE, the Indian media industry, and the challenges faced by an online-only news platform.

You studied Economics at the LSE in the 1980s. How did that affect your worldview?

My view of the world today is pretty much the view that I acquired, or shaped, while I was at the LSE. There were so many things happening at the time. It was a very different time, politics was very contentious, and of course we were heavily involved in student politics. At the LSE, the Conservatives were a strong presence, but the university was very left-wing. There was Thatcher and the miners’ strikes, plus the Emergency in India. Mrs Thatcher provoked strong emotions, I remember, on both sides. I wouldn’t trade those years for anything.

My favourite memory—well, it wasn’t quite connected to the campus. A number of us at the LSESU, as an act of solidarity, went and spent time with the miners and their families. I spent a couple of days up in Yorkshire with a miner on strike, got a strong insight into British working-class life. That’s an abiding memory I treasure.

Any people you studied with who went on to do interesting things?

I had a colleague who did a Masters with me—Egyptian woman, her name was Shafik—last I heard of her, she was very high up in the World Bank…

Minouche Shafik is actually the current Director of the LSE.

Oh wow! I lost track of her career trajectory. That’s interesting. And then, there’s Mia Mottley, who is currently the Opposition Leader of Barbados. So there was some of that, some people went on to do very interesting things. But most people ended up in run-of-the-mill professions…journalists, bankers, professors and so on.

Moving on, The Wire is funded entirely by donations and doesn’t allow advertising. How sustainable a business model is this?

The amount of money you raise through advertisements is minuscule, frankly, and isn’t worth the kind of real estate that you have to fork over to those companies. We appeal to readers to contribute—we experiment with readers finding some value in the work we do and agreeing to pay. If they don’t pay, it is not possible for us to sustain the work we are doing. We have large philanthropists who account for 60% of our operating budget, and the rest comes from readers. Two or three years down the road, I hope for the ratio to shift, and for it to be 40-60. It’s completely feasible; all indications are that people in India want to preserve independent journalism. We are very optimistic about reader-driven, reader-funded news.

Online-only news portals such as Newslaundry, Scroll.In and of course the Wire have increased massively in popularity over the past few years. Do you see online-only media outlets as a substitute or a compliment to traditional print media? Is this a reaction to the shortcomings of the mainstream media?

People are consuming more media digitally, and they are doing it on their phones. English-language newspapers, particularly among the young—well, the readership is plateauing or even decreasing. So newspapers are devoting more and more space to online journalism. The medium makes it easier for less resource-intensive news sources such as us to survive. The Wire started with maybe $5000. And in two and a half years, we scaled up, and reached the kind of impact that a newspaper can only dream of. That’s because of the nature of digital media, the nature of social media. The technology enables independent voices to flourish—we have taken advantage of that, and others are doing the same thing—but it’s not as if newspapers and television channels aren’t also investing a lot in their digital presence. It’s a very crowded space.

However, the same shortcomings are present in the big media houses online as in print. Firstpost was one of the first online-only news websites and had a huge impact. Then it was acquired by Reliance Industries and began to moderate and tone down its investigative focus, thereby losing its USP. The digital space allows small players to emerge and flourish, but at the end of the day it is the quality of journalism that really matters.

India is similar to the US, in that more people get their media from more online-only sources than in the UK. In the UK, it is still the traditional news websites—the Independent, the Guardian, the BBC, the Daily Mail, that dominate online content. The Guardian is a great example of a paper that digitally punches way above its weight. They are gambling on what we are gambling, which is free content, that speaks to the concerns of readers. Important stories about health, the environment, in the Indian context, corruption—they won’t necessarily be funded through advertising. At the Wire we are saying, if you want that, then please donate generously.

The NYT and the Guardian have a very global reach. Should Indian newspapers be trying to expand their readership to the West to move away from such Western-centric coverage of world events?

It’s a tough proposition. The Indian media industry is really very insular, in terms of the content they provide to their readers, and in terms of their overall business vision. When I was Editor of the Hindu, I inherited a network of nine or ten foreign correspondents. That was the largest number that any Indian newspaper had.

Most Indian media, if they had a correspondent abroad, it would be in the US or the UK. And even there, the focus would be on diasporic stories. There will always be 10-15% of your web traffic coming from Indians abroad, simply because of the strength of the diaspora. Obviously, there’s a lot of interest in the issues facing Indians living abroad, but that can’t be the be-all and end-all of your coverage.

I don’t think any media house in India today is in a position to cover news on what is happening in Africa, say, that people in Asia are going to want to read. One thing is the cost—the other is that very few Indian media houses are truly independent from business interests and the government, and you need that to be credible.

The rise of “fake news” in the Indian context often means sharing articles that are not true on Whatsapp, which is sometimes harmless but often leads to communal violence. Is there a solution?

One has to fight it, but fake news has always been with us. Modern technology has increased the velocity with which it operates, but from the beginning of the media industry people have peddled lies. But there is a specificity to fake news in the Indian context—often information is circulated with a view to inciting violence. What do you do when information is aired via Whatsapp, when you have no idea who created this context? How do you trace the origin of a particular message on Whatsapp? It is important for us to actively try to counter fake news. There is a very good website called Altnews dedicated to rebuttals, and they get decent traffic. So there are enough people trying to dispel rumours, but it is hard to say how effective the counter is.

How has what you want to cover been shaped by the pressures of social media, as the Wire is online-only? Do you ever feel pressure to cover stories that you know will get more engagement? Is this any different to the pressures faced by traditional media?

In a traditional newspaper set-up, the editorial department is separate from the advertising department and circulation department. The traditional belief has been that you keep these three chambers separate. In India, unfortunately, Editorial comes under pressure from Advertising. That has its impact on selection of news, but not in a linear way. The papers that are overly dependent on advertising take on a certain editorial culture. You get used to thinking that your paper is catering to the richest segment of society, so are they really interested in a piece on rural deprivation or a disease that only affects the poor? Issues that don’t directly impact the life of elite readers do not make it into the agenda.

The line between your funding model and editorial content in some ways comes into even starker relief in the digital space, where teams come under enormous pressure to produce “clicky” content. ABCD—astrology, Bollywood, cricket and devotion—generate huge amounts of traffic, everything else is secondary. With that traffic comes advertising revenue. We at the Wire are not in that game. The metric that we are chasing is not how many clicks we get—we are not funded through that route. The pressures affecting print are there in an even more visible manner, online, for traditional media houses, but thankfully not for us.

The LSE South Asia Centre recorded Siddharth Varadarajan’s speech on “Challenges to Press Freedom in a Democracy”. It can be accessed at https://www.facebook.com/pg/SAsiaLSE/videos/.