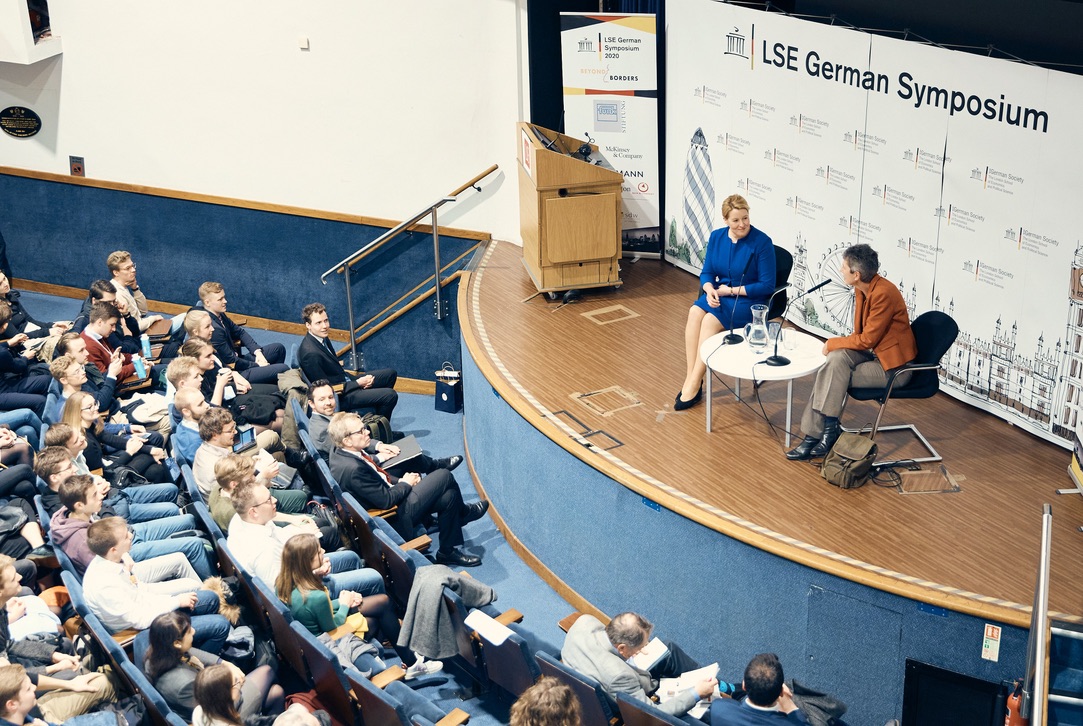 A dialogue beyond borders – the German Symposium 2020

Over the past few weeks, Germany has experienced exceptional chaos due to one storm – literal or political – after another. Trains stopped running, flights were cancelled, and highways and schools were closed. Amid the scenes of dysfunction, political chaos was lurking. For the first time in history, a minister president of a state in Germany was elected into office with the assistance of the far-right party Alternative für Deutschland. His election in Thuringia was followed by a huge outcry that led to his eventual decision not to take the post. Another result, however, was the decision of the leader of the conservative Christian Democratic Party (CDU) Annegret Kramp-Karrenbauer to step down from her leading position as potential chancellor candidate for the party, citing a desire to distance herself from any coalitions with radical parties from the right or left. This now opens the way for other candidates who have been eagerly waiting in the wings.

How do we make sense of all of this? The annual German Symposium, organised by the LSE SU German Society a few weeks ago, offered such an opportunity. Held under the guiding motto ‘Beyond Borders’ in the first week post-Brexit, the Symposium brought together different stakeholders from politics, business, and academia in Germany and across Europe to discuss the pressing issues of today.

In light of recent political developments, the German Symposium hosted three potential chancellor candidates from the main political parties. While Vice President of the Economic Council of the CDU Friedrich Merz focused on power politics and the importance of strong European industry, Federal Minister for Family Affairs, Senior Citizens, Women and Youth Franziska Giffey discussed the perceived prevailing differences between East and West Germany, stressing the importance of German solidarity and mutual understanding. The leader of the Green Party Robert Habeck, on the other hand, portrayed his party as an alternative to the old model of people’s parties and sees compromise as the art of politics. The differences between the three could not have been more obvious. In light of such discussions, the run-up to the elections in October 2021 looks to be very interesting.

Beyond German politics, another topic of this year’s German Symposium was Brexit and the future of the EU. Several judges from different European courts discussed the role of EU institutions in maintaining citizens’ trust in the European project, while banking and investment professionals gave insights into how the European monetary union could be completed. Representatives of different business sectors in the UK shared their concerns and hopes regarding the impacts of Brexit. Moreover, Scottish MSP Fiona Hyslop urged European friends to “leave a light on so we can find our way home.” The overall consensus remained that cooperation and friendship between Britain and the rest of Europe needs to be strengthened.

Sustainability and climate change were also high on the agenda in panels with research experts, climate activists, politicians, and businesspeople discussing the future of sustainable finance and the responsibility of businesses and politics to act against climate change, as well as the political voice that climate protests have given to people.

The 26 public events and dozens of informal sessions over the course of five days were well-received and attracted an interested and diverse audience. Another highlight of the Symposium was its mention in the Frankfurter Allgemeine Zeitung (FAZ), one of the main German newspapers, as well as in the Financial Times and The Guardian.

If any of the above seem interesting to you, stay tuned for next year’s edition of the German Symposium. Meanwhile, drop in to one of the many upcoming events organised by the German Society!