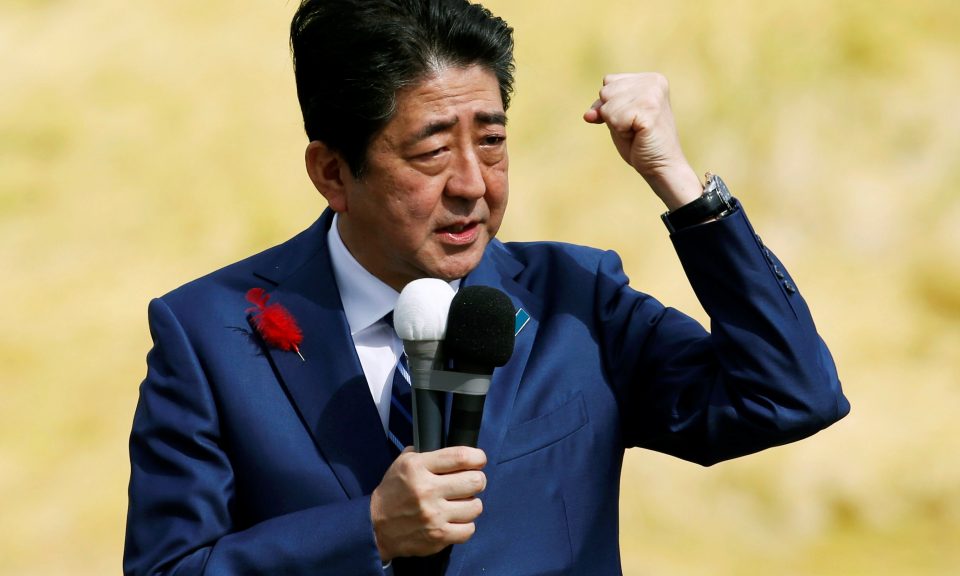 Unlike May, Abe Knows How to Win a Snap Election

On 25 September, Shinzo Abe, the current prime minister of Japan, called for a snap election to be held on 22 October. There are many reasons which favour the ruling party to call for an early general election. Yet the main reason is similar to the time when Theresa May called for an early election: the opponent Democratic Party was in chaos and was weak and has been disbanded. Things seem to go the Japanese prime minister’s way until the declaration of a new party, the Party of Hope, led by the Tokyo governor Yuriko Koike, makes the forthcoming election the focus of the month. History has a way of repeating itself and now the question is whether the ruling Liberal Democratic Party (LDP) will, like May’s Conservatives, also lose its majority.

The ‘three arrows’ – monetary and fiscal stimulus together with structural reforms – collectively known as Abenomics are the economic policies launched by him in 2012 to resolve the long period of super low inflation and deflation since the asset-price bubble burst in the 1990s. The economy is doing well, unemployment rates the lowest in 23 years and raising wages for casual workers. Inflation is nonetheless below the 2% target set by the Bank of Japan. The prime minister pledged to continue the stimulus packages with two trillion Yen being injected into the financial system by the end of the year.
The newly raised opposition leader doubts the already excessive fiscal stimulus. Koike thinks the core of Japan economic problems lies with the excessive load of cash held by companies. She pledged to tax corporate cash reserves to encourage corporate spending.

So far, her party has proposed 12 populist pledges that are quite unconventional, ranging from zero food waste to zero hay fever. She planned to delay the increase in consumption tax to be risen in 2019 from 8% to 10% by the ruling party. A basic income guarantee is proposed with the goal to replace social safety net, including the unsustainable pension scheme that Abe pledged to put a great effort in reforming it. Another pledge highlight of Koike’s party is the complete shutdown of nuclear plants to bring zero nuclear power to Japan, a pledge sharply contrasts to the highly unpopular plan of the ruling party to restarting nuclear plants after the 2011 Fukushuma disaster.

Not only the pledges are popular among the Japanese, but also Yuriko Koike herself. Partly due to having worked at the World Business Satellite from which she gained connections from the business sector. She was once a senior member of LDP where during her time there she served as an environment minister for three years from 2003 and the first female defence minister in 2007 lasting for 54 days. She quit the post after the unpleasant political wrestling with her colleagues regarding the leak of highly classified military information about the Aegis Combat System, a US-developed integrated naval weapon system. She defied against Abe’s party to run for the Tokyo governorship last summer, and won in a landslide against a LDP candidate. The found of the Party of Hope has immediately led to the collapse of the Democratic Party, making her party now the main opponent against LDP. At time of writing, most former Democratic Party members defected and several LDP members joined her party. To add humiliation to LDP, Koike’s candidates will cooperate with Komeito, the coalition partner of LDP in the parament. The party of Hope is seeking to unite other opposition parties through merging and forming alliance. The challenge to LDP is beyond their initial anticipation.

However, the difficulties facing Koike are tough. She cannot largely differentiate her right wing political position from Shinzo Abe, especially on monetary policy, constitutional and national security matters. Both address the need to amend Article 9 of the Constitution, loosening the restrictions imposed by the Americans on Japan’s military force, the Self-Defence Forces, to give Japan more flexibility to response to the North Korea threat. Abe has an upper hand and plays to his traditional strength on this issue who has more experience in co-operating with the unpredictable Trump administration.

Second, her party might struggle to have enough candidates to fill the 233 seats required for forming an absolute majority government out of the 465 seats in the parliament. She has merely 193 candidates, of which 110 are from the non-existing Democratic Party. Even with enough candidates, not all of them could be elected as a member of parliament. The pre-requisite for her to be the first ever female Japanese prime minister would be therefore to have most of her candidates won seats before considering a coalition government. This may be possible, of the 50 Tokyo First political party candidates that she led, 49 were elected in the 2016 Tokyo Metropolitan Assembly election. Yet it is highly unlikely to see such stunning result the coming time. At most her party could end up as the largest opposition party with about 100 seats in the lower parliament fever than that of LDP which secured around 290 seats thrice out of the last four general elections. Yuriko Koike seems to have noticed this, and has declared not to run the election herself but to remain a Tokyo governor. Despite having populist pledges, the absence of such an influential leader could cost a significant sum of votes. Worst still, at the time of writing, she has not nominated an opposite leader. A recent poll survey dated 10 Oct shows support for Koike’s party has fallen from 29 to 18 per cent, about 20% behind LDP. Some votes are expected to shift to Constitutional Democrats, another newly found left-wing party after the Democratic Party was disbanded. Needless to predict, without a face-to-face challenge, the ruling party is going to govern Japan for another five years.

Abe’s party is not going to end as miserable as the Conservative Party. The move to call for an election one year earlier is wise, giving insufficient time for its opponent to prepare. However, dodging the confrontation between the recent scandal of helping his old college friend secure an approval from the education minister to run a new school and the serious allegation of lacking transparent governance would loss him votes and undermine his ruling power. Winning a smaller majority seems likely to be the result of the snap election. Unlike May, Abe will not been seen to have miscalculated and the snap election will not jeopardise his career.