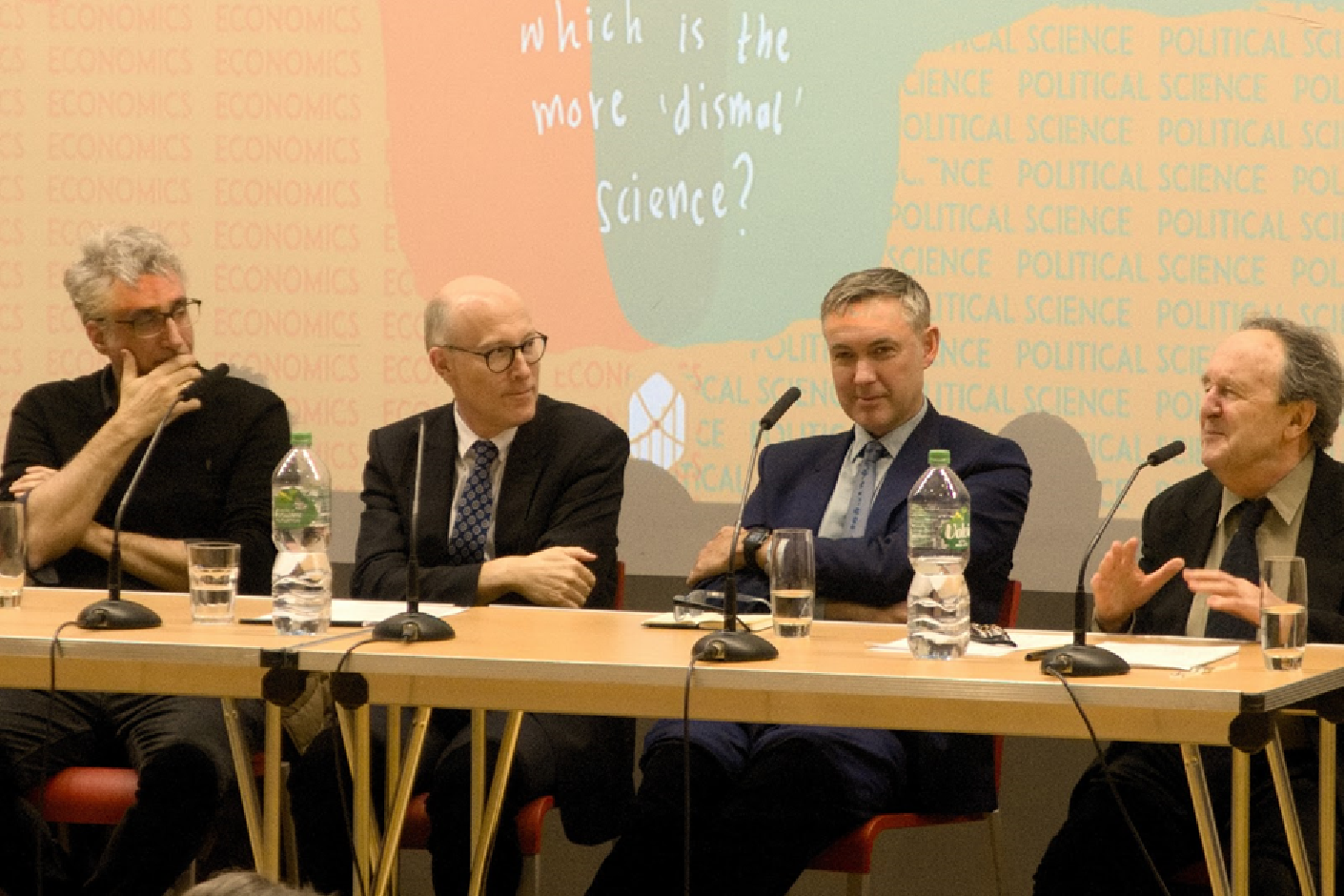 Academics ask: Should we be the London School of Economics OR Political Science?

It was billed as an epic clash between two major disciplines, and despite the odds, an unlikely winner emerged from a packed debate on Tuesday (Feb 12) to resolve a burning question – is Economics or Political Science the more dismal Science?

Organised by the LSE Economics Society, the debate featured student favourites like Ronny Razin, Harold Laski and Simon Hix duking it out to defend their work’s honour.

The event kicked off on a cordial note as the economists struck a friendly tone. Prof Razin said that economists have much to learn from Political Science, and should avoid falling into a echo chamber in their academic work.

Professor Oriana Bandiera, the Sir Anthony Atkinson Chair in Economics, took a similar approach, and acknowledged the challenge of convincing the audience her discipline was not depressing. She emphasised the need to see economics as a useful way to understand a complex world.

“As with any tool, it [Economics] can be used for good or evil. Like a knife, it can be used to generate depression and kill or help you cut vegetables,” she said.

“I’m not completely sure what I’m doing here,” he said, to audible gasps, adding that he saw neither disciplines as dismal, although each had their own flaws. He also argued for a need to better incorporate historical knowledge into both fields’ research.

But those who had expected sparks to fly were not disappointed when Prof Hix came out in support of Political Science. Prof Hix, who is also the Pro-Director of Research for the LSE, argued that Political Science is more sensitive to context, which allows researchers to more accurately consider how actually does that theory work in particular places, rather than applying a blunt instrument everywhere. This is a practice, he said, that Economics was only now embracing.

Prof Hix questioned why some economists are now studying issues like political economics that have long been studied by political scientists. “Why are economists studying these topics – is it that you are bored of studying money? …Or could it be that you think you can fix them all?” he asked.

Both disciplines have been under pressure and subject to criticism in the past few years. Many economists were faulted for not predicting the upheavals of the 2008 financial crisis, while political scientists are often accused of failing to forecast the populist upheavals in the West over the past few years.

Both sides responded vigorously to questions from the audience along such lines, asking about the legitimacy and utility of their work, as well as more practical problems, like the lack of diversity in government and economics departments.

“It [a lack of gender diversity] is an issue that cannot be cured by wishful thinking,” said Prof Bandiera, who questioned the use of quotas for hiring more female professors. She argued that the problem laid deeper, in a lack of female students pursuing economics, and that more needs to be done to dispel stigmas about economics, and promote its utility to address pertinent issues about development and equality.

Some audience members did not need much convincing at the final vote. Gabriel Li, a first year PPE student told The Beaver that he had came to support Prof Hix. “He (Prof Hix)  gave good reasons why we have to recognise the synergy between the two (disciplines) especially as students of the London School of Economics and Political Science.”

The audience vote was close, but despite a two-to-one disadvantage, Political Science emerged to win the audience vote as the less dismal discipline, by a four-point winning margin.