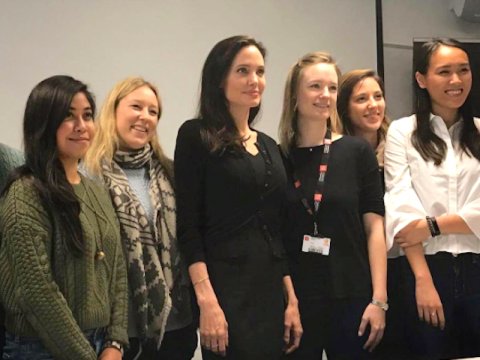 On Tuesday, 14 March, students taking the course GI425: Women, Peace and Security (WPS) eagerly filled up the classroom in anticipation of a guest lecture. The prior week featured guest lecturer Lord William Hague, one of the co-founders of the Preventing Sexual Violence Initiative (PSVI) – which aims to “raise awareness of the extent of sexual violence in situations of armed conflict and rally global action to end it.” The other co-founder is a Special Envoy of the UN High Commissioner for Refugees (UNHCR), who has long campaigned for women’s rights throughout the world. Her extensive experience working with refugees and survivors of sexual violence in conflict zones has earned her international esteem as a humanitarian and women’s rights activist, alongside her A-list celebrity status. On that morning, Ms. Angelina Jolie walked into the classroom, well prepared with a stack of notes, and delivered her first lecture as a visiting professor at the LSE.

Over the next 1.5 hours, Ms. Jolie shared her personal experiences working with survivors of rape and sexual violence in conflict, and explained how socioeconomic and political factors can lead to exploitation for stateless people via sex trafficking. Through her combination of empathy, class, and humour, Ms. Jolie delivered stories from her fieldwork that captivated the students’ attention. From her experiences working in Cambodia, students learned of the high prevalence of landmine survivors. From her experiences working with women from the Democratic Republic of the Congo, students learned that the good intentions of aid agencies and humanitarian workers are not enough, as certain initiatives and campaigns to assist women survivors of domestic abuse can lead to re-victimization and additional abuse by their husbands. And from her experience working with survivors of the Iraq war, students learned the story of a 13-year- old Iraqi girl who was raped and tortured as she watched her mother die. Ms. Jolie became emotional telling the story, and noted that even when wars end, survivors – especially children – are left traumatized, because for them, the repercussions of the wars last forever.

Students also learned about the efficacy – or lack thereof – of non-governmental organisations (NGOs), and the competition that can foster between them in conflict and post-conflict settings. She noted that the UN is highly dependent on NGOs to fill in the gaps and address the needs of survivors, yet there is not one appeal or program that is at least 50% funded.

Finally, she emphasized the two-fold need for women in local communities to be part of the peace-keeping and peace-building process, and the need for men’s voices and involvement to be included in this process. Towards the end of her lecture, Ms. Jolie took as many questions as she could before posing for official pictures with the entire class. Afterwards, Prof Christine Chinkin, Director of the Centre for Women, Peace and Security, said: “I am delighted that LSE postgraduate students have had the unique opportunity to learn directly from the valuable insights, perspectives and experiences that Angelina Jolie, UN special envoy and visiting professor in practice, brought to the class.”

Elizabeth Edwards, a post-graduate student in Human Rights, commented “Those of us who were present were struck not by her celebrity status per se but by her words, which were passionate, thought provoking, and shocking at times. It’s safe to say we were all riveted by Ms. Jolie’s presence because she emanated professionalism and sincerity. Her years of experience in the field, which she relayed to us through personal and often times emotional anecdotes, was a welcomed addition to our knowledge, after already having studied many of the theoretical and legal aspects of the WPS agenda.”

Multiple media sources, including the Daily Mail, The Evening Standard, Business Insider UK, The Sun, and BBC News, among others, quickly picked up the story and published within hours of the lecture. If her first lecture was any indication about her upcoming visiting professorship when the new WPS course launches later this year, incoming students will be lucky to hear of the breadth and depth of Ms. Jolie’s experiences to not only supplement their curriculum but to also add a practical and tangible dimension to it.