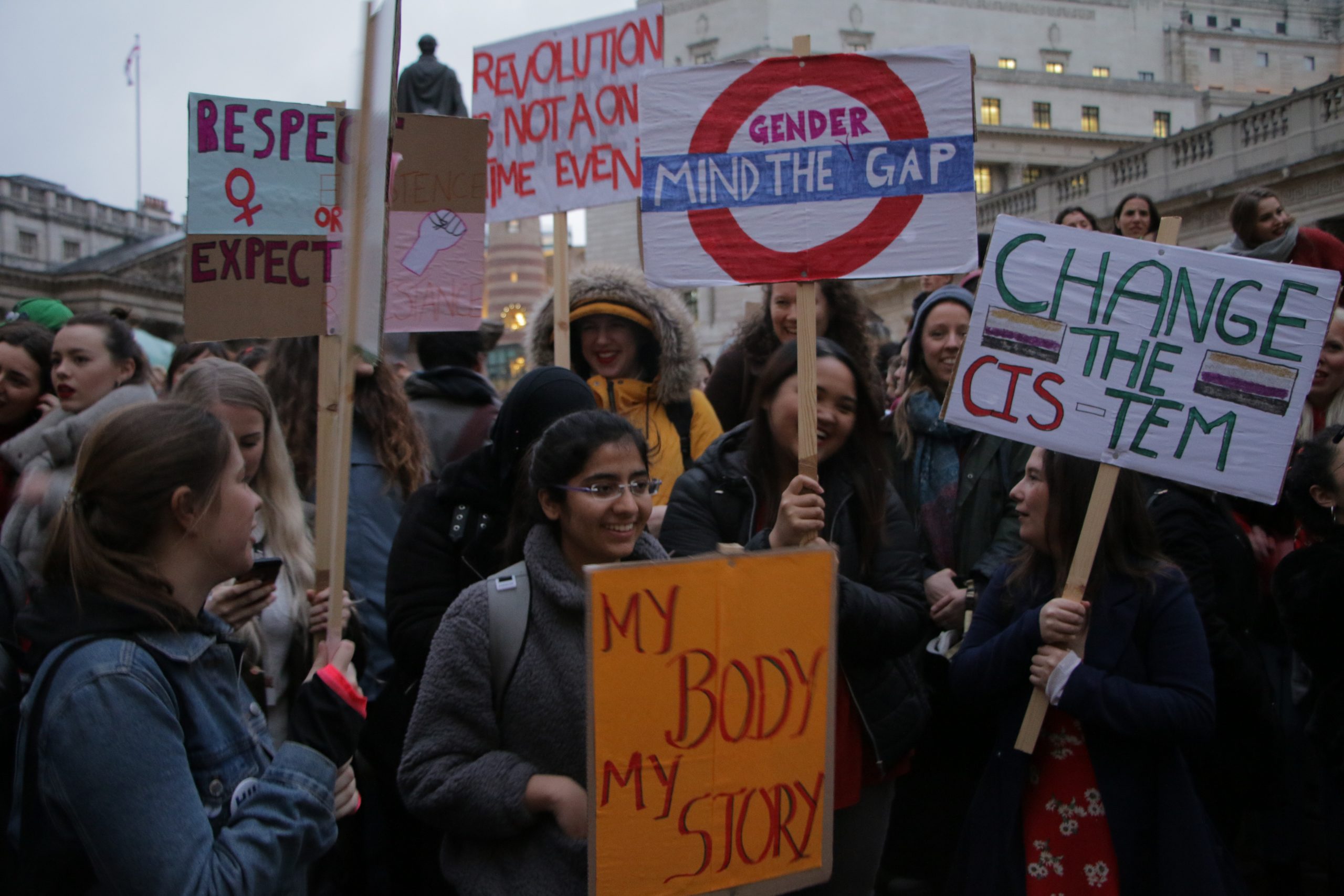 Behind the scenes of the London Women’s Strike 2020

March 8th is International Women’s Day, a day in which millions of people will gather across the globe to protest inequality, discrimination, and violence against women, to name a few of the key issues. What is it about, and what is so special about the London chapter? The Beaver spoke with Julia, a member of the Women’s Strike Assembly and organizer of the Women’s Strike to understand the ideas behind it and the organization process.

The strength of the Women’s Strike in London is that it is entrenched and informed by larger structural theories that criticize capitalism, give perspective on the socialized feminization of women, and allow for the creation of far-reaching connections that transcend borders, gender, and ideological divides. Largely influenced by Marxism, the strike is based on the idea of collectivity – the struggle of women in London is contingent on the struggle of women across the globe, on International Women’s Day, and every other day of the year. Organizers of the Women’s Strike understand it like this: on March 8th and beyond, women of the world unite.

Eighty grassroots organization groups in the UK are working in collaboration throughout the year to bring this event to life. Women across the board, referring to each other as ‘sisters in another city’ and ‘comrades’, seek not only to raise awareness about inequality and patriarchy, but to kick start a socialist revolution as well:

“We have zero desire for an equality that promises nothing more than being equal to a wage slave; instead we are seeking to destroy altogether the system that – by its very design – divides, harms, and exploits us. We already know women’s liberation to be at the heart of the struggle.”

The Women’s Strike Assembly takes complex theory and makes it intelligible to the public, showing women how each of their individual lives are part of a larger power structure.

“Our big focus has always been the idea of social reproduction,” explained Julia. In simple terms, this refers to the idea that delegating unpaid tasks such as cooking or caring for children to women is the basis upon which capitalism grows. The greatest conceit of capitalism has been to make us all buy into the idea that some of the most basic and necessary work can be relegated to the confines of the private home, and deserves no pay. It is only when this kind of work is not done that we realize how valuable it is.

“There is a huge amount of labour that makes the world go around that is being ignored by the global economy and the way the world works, and that needs to be centred,” said Julia.

The idea is that if women pause or ‘withhold’ this labor, the whole system collapses. At the same time, the domestic work women do cannot be dropped altogether, as it is often a question of their very survival. For that reason, the strike seeks to show the world how much this system relies on women. It is “more than just an event, it is a movement, a continuous and militant practice of feminist solidarity with communism at its core.”

Even though the ideas behind the march are grounded in Marxist theory, Julia explained that “We are not here to push communism onto people, we are talking on a very practical basis: women are literally dying across the world, there are rampant amounts of sexual violence, austerity is making women’s lives miserable even more, women’s refuges are shutting down, most of us can’t walk home at night without being shit scared. Those are the things we talk about on a very practical level, then the way we try to talk about it is ‘What kind of world do we want to live in?’, and we don’t really have the answers.”

Another major idea behind the strike is questioning the responsibility of the state for the issues women have been facing. This has become even more urgent in the wake of Brexit and a Conservative electoral victory in 2019.

“The state having control over everything, having so much power, defining who can come in and who can’t with violent borders, that state needs to go.”

It is also about “joining millions of women across the world, showing solidarity with different women’s struggles across the world and showing that as women we do have power,” said Julia.

The Women’s Strike will be extended over two days, Sunday 8th and Monday 9th, in support of the University and College Union (UCU) strikes to protest unpaid as well as paid work. From pay inequality to the unequal division of care work, higher education is a hostile environment for women, queer people, and particularly trans people who face sexual harassment, racism, and other abuse. Higher education is also a space of precarious working conditions for workers – notably for cleaners here at LSE, for example.

In that sense, the Women’s Strike is aimed at “starting a conversation about how we build an alternative world. I don’t think the revolution is going to come from the Women’s Strike itself, but we are creating a space to talk, experiment, and put into practice alternatives to the shitty system we live in right now.” That begins with recognizing women’s work and creating communal spaces, in order to find collective solutions and alternatives.

With all activism, there is risk involved. Striking and public gathering is a democratic right, but Julia explained that “We are doing things that challenge and are pushing the boundaries, we are also very conscious that we can’t all be doing very risky actions because a lot of us are mothers, migrants that can’t risk deportation and things.”

In the UK, different cities are having women’s strikes on the same day. Even though these are all organized by the Women’s Strike Assembly, “Assemblies and local groups have their own autonomy to decide on the narratives of things and the focus,” explained Julia. For example, women in Bristol will be doing the performance of ‘a rapist in your path’ and the focus will be on sexual violence, while in London, the Assembly organized a massive clothing drive with a free clothes exchange. This will happen “in Central London  because we are trying to target this hyper-consumerist world… and try to think of what an alternative would be because the way we are consuming at the moment is not sustainable.”

Central London is the heart of a dystopian capitalist landscape. From there flows the major themes of the strike: a work strike but also a consumption strike, because consumption works to reinforce the unequal conditions that oppress women and benefit the capitalist system. The production of cheap clothes is also a form of (underpaid) labor that overwhelmingly employs women. Overconsumption also contributes to the climate crisis and the destruction of our planet. This also ties back to the idea of care work, as shopping is usually a task that is attributed to women – another form of unpaid labor.

On International Women’s Day, the Women’s Strike Assembly calls on people who “self-identify as men” to volunteer to take on this social reproductive work and do the free cooking and caring to support women who strike. A reproductive work team is also present at each meeting and event organized by the Women’s Strike Assembly – coming to a meeting is in a way a right of the privileged (those who have time to travel across London, find someone to take care of their kids, etc.) so Julia explained that “When it comes to practical things like providing child care, we do think about these things” and “by the nature of the work we do, it is very diverse and it reflects how diverse London is.”

The 8th of March Women’s Strike in London is organized by the Women’s Strike Assembly, which started in 2018 and counts roughly 60 women across the country and about 20 to 30 activists in London. “With London being London, a lot of us move in and move out,” explained Julia, with most activists being involved in different groups and initiatives throughout the year, most notably the Kurdish women’s liberation movement, decriminalization of sex work, and climate strike, while bringing contacts from their home countries. The Women’s Strike on the 8th of March also includes a Sex Worker’s Strike and is organized with various London-based grassroots organizations including trade union coalitions such as Feminist Anti-Fascist, Plan C, and the xtalk project among others. With causes overlapping and activists being well connected, collaboration across cities, countries, and with other grass root groups “happens quite organically,” says Julia.

Where there is power, there is resistance, and the Women’s Strike Assembly represents a true alternative to the top-down male-dominated world of politics. The change they seek to implement will require a long-term struggle, but the logic and ideas behind the organizing show a strong basis and starting point for such change.