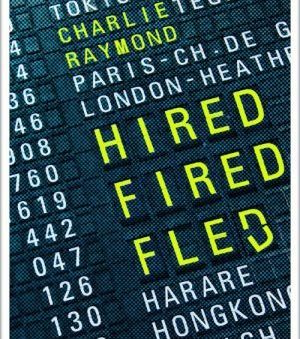 That’s how long it took Charlie Raymond to come as close as he could to career contentment. From Africa to Europe, North America, and the Middle East, Raymond’s ‘BCO’ or ‘Blind Career Obsession’ takes him across the globe in his quest to fulfill his dream of becoming a ‘pinstriped suit’ wearing movie producer. His book is a riveting account of one man’s (admittedly meandering) mission to answer the ‘ultimate question’ – What should I be doing with my days on Earth?

Raymond’s narrative of his first job as a safari guide in Zimbabwe, which he says was, “Fuelled by a teenage obsession with Land Rovers, coupled with an ability to sing the entire score of Disney’s The Lion King“, sets the tone for the tragicomic episodes to follow in the rest of the book. Raymond renders the reader helpless with laughter as he describes his ridiculously tight safari uniform shorts and his guiding tips, ‘Big poo = big animal. Just prod it with a stick, or sniff at it knowingly. Tourists love that Bear Grylls touch.’ But he is also able to incite the reader’s sympathy when he is wrongly accused of sleeping with his boss’s wife, fired on the spot, and left to fend for himself in a foreign country.

The ‘oyster theory’ is Raymond’s fallback in situations like these, i.e. the simple belief that the world is your oyster and you can achieve whatever you set out to accomplish. Whilst being a comfortingly optimistic maxim that keeps him going in tough times, by the end of the book this oft-quoted Shakespearian maxim has lost its teeth, leaving the reader to believe that perhaps Raymond should have quoted the 70s song lyric by English punk band The Jam instead, “Why the world is your oyster but your future’s a clam” (When You’re Young, 1979). This seems like a more fitting maxim for the events that unfurl over the course of the book.

For the most part, we are able to muster sufficient sympathy for Raymond as he attempts to surmount obstacle after obstacle in his multiple careers, but sometimes his own indecisiveness, gullibility and perennially ‘itchy feet’ makes him appear more like a confused and befuddled child navigating a toy store than an adult navigating the working world. In certain parts of the book, the reader’s hands itch to slap some sense into Raymond so that he doesn’t fall into yet another pitfall on the road to ‘pinstriped status’, and his sit-tight-and-do-nothing strategy when the boat is rocked is a classic example of what a graduate should not do.

Human error rather than fate seems to be at the crux of Raymond’s tragic work life, and this makes it extremely difficult to empathise with Raymond at key points in the book, particularly when he is at his lowest point working as a garbage collector. Although this offers the reader an intriguing glimpse into the day-to-day life of a job that not many are familiar with, the fact that Raymond chooses to go into this job despite being the holder of a university degree as well as a qualification from a Canadian film school, only makes the reader pity Raymond for his lack of ambition and inability to apply himself to a job that is more suited to his training. Excerpts like this result in the author losing the reader’s interest, and make everything Raymond has worked for up to this point seem completely pointless.

Whilst Raymond gives us a picture of his working life with as much detail as if it were a glorious technicolour film, he fails to give a clearer picture of his relationships with some of the key people he meets along the way. For instance, it is not easily discernible as to whether or not some of his female colleagues, such as Sarah, are Raymond’s friends or lovers, and this ambiguity distracts the reader from the telling of the story.

Yet through it all, Raymond’s depiction of his working life is real and relatable. The struggles of climbing up the job ladder in the media industry are outlined in hilarious detail, taking the reader on a rollercoaster ride of extreme highs and lows – the ecstasy of being called in for an interview and offered the dream job, and the frustrations of receiving rejections by the dozen. Throughout the book there is a sense of uncertainty as to what the future holds for Charlie Raymond, and needless to say, if job-hopping were an Olympic sport, Raymond would take the Gold medal. At the end of the book, the reader is left wondering if Charlie Raymond will ever be happy, even if he achieves pinstriped producer status.

Overall, Raymond displays superb self-awareness and honesty in the writing of this book, which is a light-hearted account of a not so light-hearted tale that almost every graduate or soon-to-be graduate can relate to.

For more on “Hired, Fired, Fled” check out : http://www.hiredfiredfled.com

PrevPreviousInterview with Dr Romani ; European Bank for Reconstruction and Development
NextLSE Sweeps Cleaning Staff Problems Under the RugNext
On Key