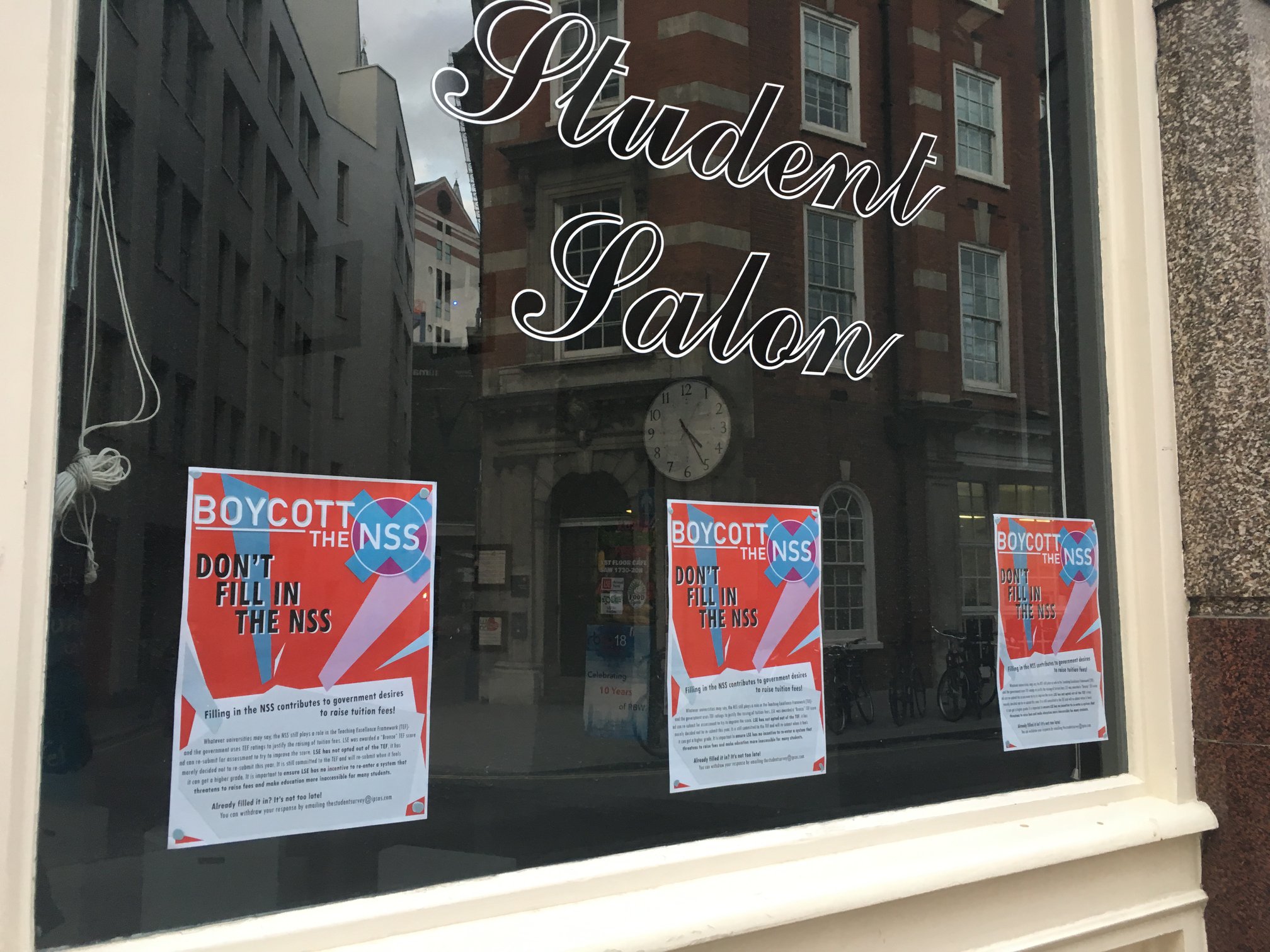 Despite the LSE and the Students’ Union’s efforts to get third -year students to fill out the National Student Survey (NSS), a Boycott NSS campaign has formed in response and appears to be gathering steam.

LSE Boycotts the NSS, the Facebook page of the Boycott NSS campaign, is calling for students to refuse to fill in the NSS. The campaign protests against the increasing marketisation of UK higher education.

It states that when universities are forced to score highly in metrics, they save money through job cuts and course closures without regard for students or workers. Despite Theresa May’s announcement in October that tuition fees would be frozen for the coming year, the group continues to be concerned about the link between the NSS, the TEF and raised tuition fees.

The campaign group have put up posters across campus encouraging students who have already filled in the survey to email and withdraw their data. A representative from the campaign commented “It is important to ensure LSE has no incentive to re-enter a system that threatens to raise fees and make education more inaccessible for many students”.

In 2016, following the announcement of the Teaching Excellence Framework (TEF), with proposals to use NSS scores as a metric, the LSESU ­­­­campaigned for a boycott of the NSS to display its opposition to the TEF. The boycott was unsuccessful. 61.67% of eligible students completed the 2017 survey, below the percentage completing it in the previous year, but above the final UK average rate of 58.3%. Excluding small and specialist universities, LSE was fifth from the bottom in the NSS rankings, receiving a TEF ranking of bronze. ­­­

The LSE has made efforts to improve student participation in the NSS this year. All students who have completed the survey are sent a link to a £5 Amazon voucher. Additionally, LSE Director Minouche Shafik emailed all third-year eligible students on the 14 February to encourage them to complete the survey.

Her email states “Your opinions are crucial for this and future generations of LSE students…this is your opportunity to have your say and make a real difference to your School. LSE’s student experience is the top priority for me and everyone at the School, and I strongly encourage you to share your views and tell us what we do well and what we need to do better.”

The Students’ Union is not boycotting the NSS, stating “In light of…what we have embraced as a genuine and sincere commitment to increasing student satisfaction by the LSE leadership, we recommend to the membership to participate in NSS.”

In return, they have negotiated a £25,000 participation fund, bursaries for halls places for students with low socio-economic backgrounds, remodelling of the library, and a commitment to developing a partnership with an external company to allow for free printing and photocopying for students.

Mahatir Pasha, the General Secretary of the LSESU, stated “Previously, completion of the NSS was linked to TEF and the increase of fees. This year the link between the NSS and TEF has been removed, so the SU’s previous policy of undermining TEF by any means possible is no longer explicitly linked to the NSS.

“We are aware of the Boycott NSS campaign which has been started in recent weeks and we are committed to engaging with these students and understanding their concerns, but also focusing on the benefits we can bring to the experiences of all LSE students with the changes which we have negotiated.”

The SU further states “We have been vocal throughout the year in our opposition to the changes being made to higher education and the government’s forceful marketisation of the sector. So, whilst we are encouraging our membership to participate in the survey, we will continue to oppose TEF through every possible channel.”