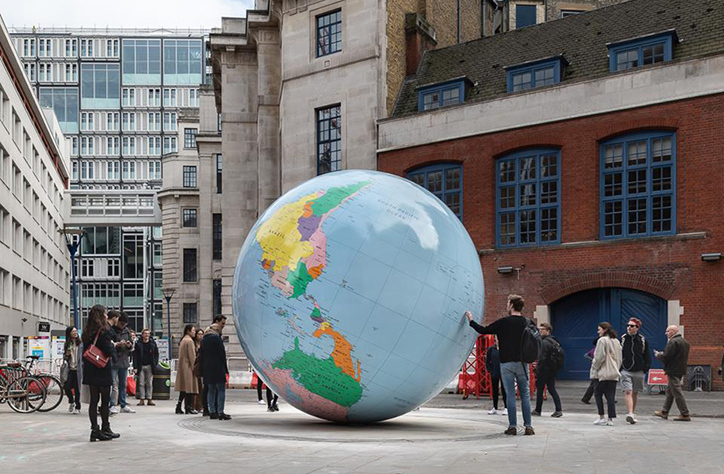 On the day Mark Wallinger and the Director opened ‘World Turned Upside Down’, a public art sculpture on Sheffield Street, the first of a series of vandalisations was made to the globe within five hours. Students, staff and tourists have circulated around the globe consistently since its unveiling. Two security guards have been stationed at the globe.

With a Sharpie the first student added ‘Palestine’ to the globe. They have since been reported to the School. Based on a UN-approved map, the globe marks ‘Israel’ and the ‘West Bank’, but neither ‘Palestine’ nor the ‘Gaza Strip’.

In an anonymised interview, one student involved in the vandalisation told The Beaver they believe Israel is an illegal military occupation and they oppose a two-state solution, saying they do not believe Israel should exist.

Later, the text had been removed. Further students added ‘Gaza Strip’ and ‘Palestine’ on post-it notes. These were removed, another student crossed out Israel and added Palestine, and later further post-its. A sticker stating ‘Boycott Israeli Apartheid’ was placed on the globe. Initially the sticker remained but was removed. At present, the globe has no amendments.

Members of LSE security told The Beaver that any vandalisations have been removed by cleaners employed at the LSE.

Ben Reiff, the outgoing Founding President of Voices of Israel-Palestine, told the Beaver:

“I don’t imagine the labelling on the globe can be changed now, but the original labelling clearly upset some students and the subsequent graffiti has upset others. In reality, it would probably have become a target for political graffiti regardless of what was labelled, since it is impossible to find consensus on Israel-Palestine. Anyone making a map of the world or the Middle East specifically is forced to make political choices, whether they like it or not.

“What is particularly strange in this case is the decision not to differentiate the Gaza Strip (not labelled on the map) from Israel, while the West Bank (by all measures less separate) has been differentiated.

“If we’re going by UN standards, it should probably label ‘Israel’ (whose sovereignty and independence excluding the West Bank and Gaza was recognised in 1967 by UN Security Council Resolution 242) and ‘Occupied Palestinian Territories’ (the Palestinian Authority was unsuccessful in its 2011 attempt to gain full UN membership as a state, but Palestine has been recognised as a UN non-member observer state since 2012).”

This is the world as the UN knows it – no Palestine. 🇵🇸 This artwork claims to invite us to see the world differently, but in reality encourages us to reproduce the status quo and reinforce inequality. This is *perfect* for LSE we think! @lsesu @lsesulabour #partofLSE https://t.co/kbEfMkpMoN— UNISON@LSE (@UNISONLSE) 26 March 2019

They have reportedly reached out to LSESU Labour in support, who have drafted a public statement which states:

“We stand with all students and peoples who have been omitted from this sculpture and stress our commitment to seeing a map that embodies the vision of a two-state solution we are campaigning for.”

This morning @LSEnews put up a new sculpture of a globe and it has already been defaced. This is disgraceful anti-Semitism on my campus and I have never felt more ashamed to be a student here. pic.twitter.com/SPKIpa1YBf— Angus Reilly (@Angus_Reilly) 26 March 2019

In an interview with the artist, Mark Wallinger told The Beaver that he made no amendments to the United Nations’s delineated map except turning it upside down. Would you say you’ve altered the map at all? Wallinger: “No, it’s scrupulously to the UN map as it stands now and working through a company called Global Mapping. There a lot of contested regions in the world, that’s just a fact.”

A representative from Global Mapping said that their map, which is one of at least a dozen accepted by the UN as accurate, is sold around the world. (India and South Korea take issue with the Kashmir border and the Sea of Japan, respectively.) They also confirmed that they had no dealings with LSE in particular.

Shafi told The Beaver that “one of the most contentious things that has been done on the globe is mark Jerusalem as the capital of Israel which no official map, legislating body, or international law, accepts. It is actually Telaviv, not Jerusalem. The only person to recognise this is Trump. The designer claims it’s the UN map which has been used but that’s factually incorrect. It’s a very evident political bias which LSE is adopting and that’s completely wrong.”

He added: “The globe undermines the two state solution which even the UN advocates for.”

The UN has changed its position on the capital of Israel since 2004, when it did not consider either Tel Aviv or Jerusalem to be the political capital. The UN has declared that East Jerusalem is part of Israeli-occupied territories or occupied Palestinian territory, seeing it as eventually being the official capital of both Israel and Palestine. The General Assembly resolution ES‑10/L.22 in 2017 declared the status of Jerusalem as Israel’s capital as “null and void.”

An LSE spokesperson told The Beaver:

“The artist confirmed he used the United Nations as the authority for the names and borders of countries outlined on the work.

“We have noted and are considering the concerns expressed by a number of students and members of the LSE community.”

It is unclear how any further vandalism will be tolerated, or whether the globe will be edited regarding future geopolitical changes. Whatever the case, there are constantly people examining and discussing LSE’s new sculpture.

CORRECTION: This article previously stated that UNISON was the only trade union on campus. This is incorrect. UNISON, UCU and Unite have a Recognition Agreement with LSE. The Beaver regrets the error.

PrevPreviousLSE Library – The Most Social Spot On Campus?
NextStudents Rally Against Sexism in the LSE Athletics UnionNext
On Key