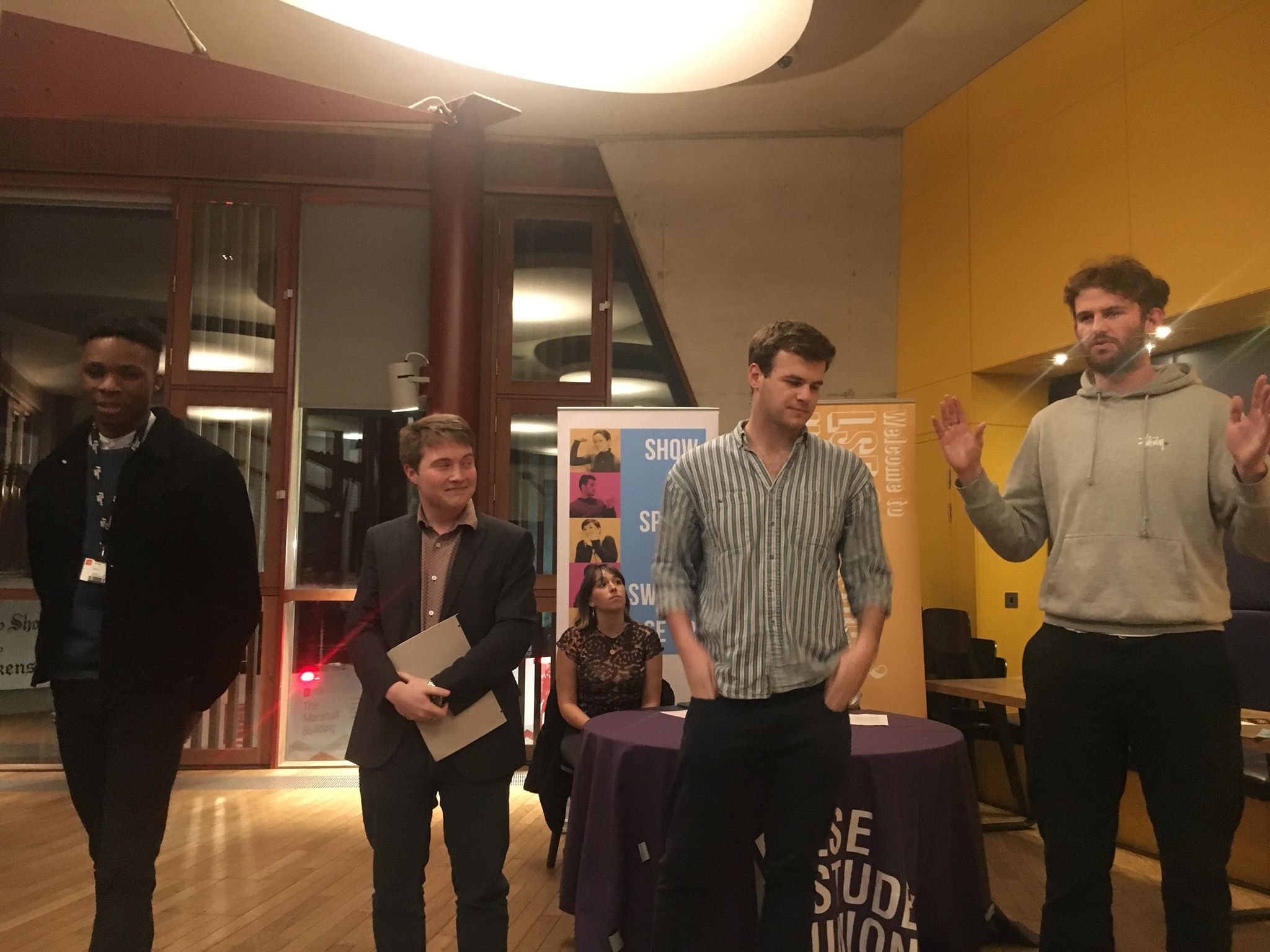 Round Two of Hustings: Consent, Community and Inclusivity

Later on Thursday the 14th, candidates running for General Secretary had a chance to participate in hustings for the position, alongside other roles.

Four candidates attended the second session of the day, with two candidates absent and another sending apologies. Zulum Elumogo, Will Stein, Alex Selway, and Harry Compson (@lsepunz4gaddasfis_sonsfundz) spoke for two minutes each to around 50 people. Stephanie Zahlan de Cayetti, whose manifesto is not available on the LSESU website, was absent, as was Scott Oatley. Rodrigo Kohn was unable to attend but his speech was read out on his behalf.

From 5:30pm, the candidates presented their cases and then answered questions from the audience. Candidates ran for a range of positions with the sabbatical positions coming up last. Though there were around 80 people in attendance, by the time the Gen Sec candidates spoke, this had reduced to around 50.

Zulum spoke first and emphasised the importance of improving and maximising the overall student experience, focusing on the bigger picture, and outlined what he has achieved so far in the role and how he would like to build on this success.

Will outlined the need to improve the student experience, describing his work in building social networks, and advocated for improving the sense of community at LSE through events that could be funded by reaching out to alumni.

Alex similarly emphasised the need for a strong student community, putting forward the view that despite having a world class university, the SU is not world class itself. He also pushed for greater empowerment policies and a sabbatical forum.

Harry for LSEPunz stood on a policy driven approach emphasising the need to focus on student wellbeing and mental health facilities across campus – drawing particular attention to the issues of a short term counselling system and advocating a more specialised on-site, long term approach.

Rodrigo’s speech was read out on his behalf and drew attention to the need to question the role of Gen Sec and what it can achieve, pushing for incremental change that would make a difference to the student body.

Issues raised by the audience included how each candidate would work with other sabbatical officers, how they would ensure LSE is safe for all members of its community (particularly in regards to consent), how they would reach out to students, issues regarding societies accessing their finances, their respective styles of communication, and why they were running for Gen Sec.

In response to the crucial question of why they were running for this position, the salary of which is £28,000 p/a, the candidates gave a range of answers. Harry emphasised his approach as being policy driven, aiming to increase accountability. Will emphasised that many of his policies overlap with different roles and that he is “quite good at doing things”. Alex echoed this emphasis on policies overlapping with different offices, pushing the focus that the “Union works for you” and requires a big change. Zulum stated that he loved the role, is “winning in the role”, and wants to continue delivering on the policies started this year.

Only one of the 12 candidates for the position of Member of the Trustee Board attended the hustings, with another sending apologies and having their speech read out on their behalf. All of the other 10 candidates were absent.

Inclusivity was a theme, with diversity and engagement also at the heart of many policies being advocated for. Several candidates also highlighted the need for social and study spaces, increased visibility and education around the support available for students, the cost of living in London and the need for encouraging student participation across the AU. Several candidates also stood on policies that included expanding beyond the university community, looking to support prospective students in applying to university and improving communications to students prior to freshers’ week.
One concern raised, however, was that no one was standing for the position of LGBT Officer or Disability and Wellbeing Officer. Repeated references were also made to SU bureaucracy.

Voting opens on Monday, 18th March at 10am and you can view manifestos of the candidates here.