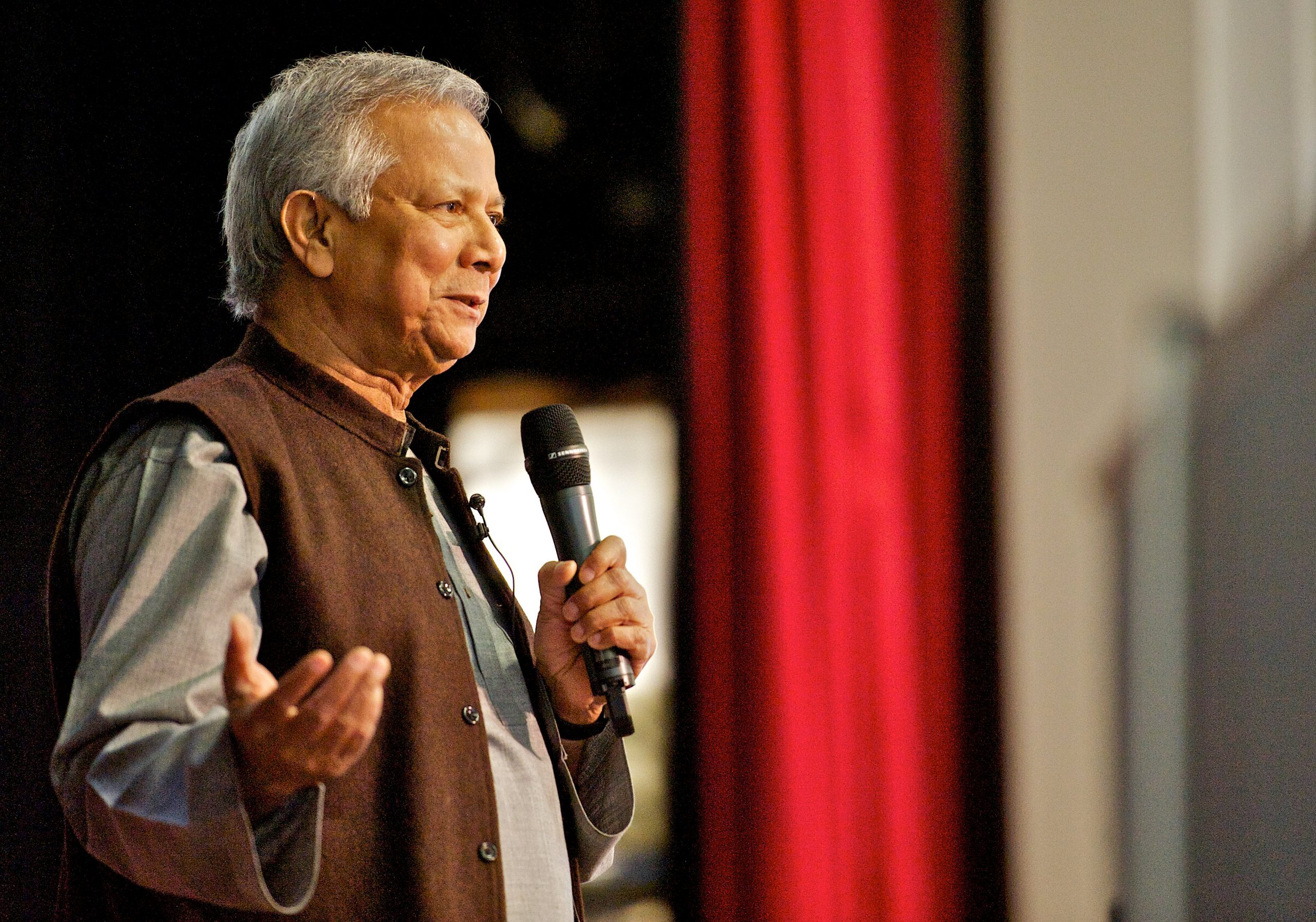 Changing The System: In Conversation with Muhammad Yunus

In an exclusive interview, Nobel Laureate Professor Muhammad Yunus talks to The Beaver about social businesses, criticisms of microfinance, and whether voluntourism is a good idea

Muhammad Yunus has no plans to slow down. In 1983, he pioneered the concept of microfinance by founding the Grameen Bank to provide banking services to the poor, and won the Nobel Prize in 2006 for his “efforts through microcredit to create economic and social development from below”. He also won the Presidential Medal of Freedom in 2009, and the Congressional Medal of Honour in 2013 for his efforts in combating poverty, picking up fifty honorary degrees on the way. Now, at the age of seventy-seven, the soft-spoken former academic is travelling the world, speaking about his idea for a revolutionary new kind of social business.

I interview Muhammad Yunus just before he speaks to a captive LSE audience on a Saturday evening. He is on a whirlwind four-day tour of the UK, having just arrived from Rome, and is here to promote his new book, A World of Three Zeroes: the New Economics of Zero Poverty, Zero Unemployment, and Zero Carbon Emissions. Later, he assures the crowd that he is delighted to be at the LSE, having received an honorary degree from the LSE in 2011—but the faults that he sees in the current education system, and his ideas to remedy them, prove to be a large part of our later conversation.

Professor Yunus is best known for popularising microfinance in the 1990s. It has lost some of its lustre in recent years, despite having once been one of the most admired concepts in international development.  In India, aggressive lending by microfinance firms led many farmers to commit suicide and resulted in a regional government cracking down all microfinance activities in 2010. Empirical data on the role of microfinance is difficult to find, but MIT ran a 2015 randomised control trial showing that over an 18-month period, access to microfinance had no effect, either positive or negative, on poverty. Fresh from reading about the economic debate, I ask him how he thinks microcredit can address the challenges around bad debt and irresponsible borrowing as it moves forward.

His answer is gentle and well-rehearsed: clearly this is a question he receives often. “Consumption-smoothing and excessive profit-generation are deviations from microfinance. Microfinance is intended for income-generating activities. Your loan must be used for an investment which allows you to pay it back, and at Grameen Bank, we see a 98-99 percent repayment rate. We also encourage women to have savings accounts in the bank as well as taking out loans, and actually, the total in savings in Grameen Bank is higher than the total loan amount.”

He goes on to tell me about how microfinance also works in more developed countries than Bangladesh: “Grameen America started in 2008—we have 20 branches in 12 cities, and they have lent out nearly a billion dollars.” I ask him why he thinks microfinance hasn’t taken off in the UK. His answer is that microfinance in the UK has not been established properly—“As long as you adhere to the Grameen methodology, any place in the world where there are people left out of the financial system, there is a role for microfinance. Grameen America works well, and there is no reason why you can’t provide financial services to the poorest women in the UK as well.”

We then come to the meat of the interview: Muhammad Yunus is interested in social businesses. Social businesses in his conception solve social problems with business engines. Importantly, they are financially self-sustainable, and profits are reinvested in the business, creating an institution. And young people have an important role in this new world.

Professor Yunus is sceptical of the role of charities, stating “Charity retains the status quo, but we need to change the system. The limitation is, the money you spend on charity doesn’t come back, but if you create a business, you can plough its profits back into the business, meaning that your original money has endless life.

“Institutions such as the LSE should be teaching young people there are two kinds of businesses—those that exist to solve problems, and those concerned only with making money. The capitalist system thinks that humans are only money-minded. This demeans us! Human beings have selflessness within us, and we need to create a system to accommodate it.

“There is a problem with what you are being taught in universities. You can be not just a job seeker, but a job creator! When you go to the LSE, at the back of the mind you want to get a job at the end of your degree”—I laugh, and tell him that this is exactly the case, except that it’s at the forefront of everyone’s minds. “Young people are not just fodder. Young people are creative: if you take a job that is the end of your creativity. You are a giant of a human being, trying to squeeze yourself into a tiny slot. What a shame. Why don’t you explore your full potential?”

He continues to say, “If you are a job seeker, you are at the mercy of other people. But all you need is an idea—and then you can become an entrepreneur. A handful of people own all the wealth of the world. This is getting worse, and is a ticking time-bomb. But young people can stop it. With social businesses, you can pay yourself a salary, but you plough profit back into the company so more social problems are solved. Wealth isn’t being concentrated, because you are working for yourself. You are making money for yourself, but you are not becoming a mercenary. This is one way to redesign the system and redistribute wealth.”

I ask him about his opinions on “voluntourism”, the trend of young people going to developing nations for a short period of time to help “social development”. He is dismissive, saying “It is important to go out and see the world, but don’t feel like you can save it. Development should begin at home… help yourself first, and once you know how to solve problems in your backyard, you can apply it to other contexts. Work on national development before international development. If you can solve all the problems by throwing money, the world would be free from all problems! You need to change the system.”

Change the system…the refrain heard so often by those unhappy with the hand that neoliberal capitalism has dealt them. Muhammed Yunus has a plan, although only time will tell if his idea of social business will take off. But he is confident of its success. With a cheeky grin, he says, “I remember when critics said that microfinance would never work… now look at the number of borrowers Grameen Bank has.” And as he walks off to speak to an LSE audience that applauds him like they would a rock star, I wonder if Bangladesh’s favourite son has hit on an idea that could change everything.

PrevPreviousBenefit Reform Chaos Means Thousands Will Go Without This Christmas
NextUnboxing The Doughnut: An Interview with Kate RaworthNext
On Key